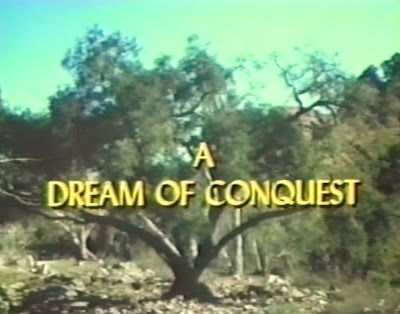 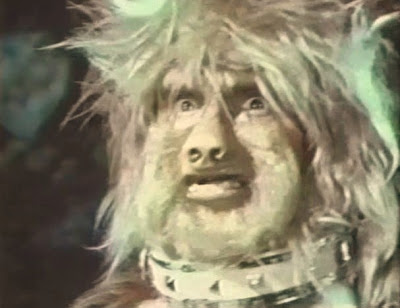 The Fantastic Journey's fifth episode, "A Dream of Conquest," is the first installment to open with a voice-over narration accompanying the opening credits.  Mike Road (the voice of "The Source" in "Atlantium") now recounts the series premise.  He also names and describes the main characters, and notes that our heroes --  now together -- "face the unknown."
I point out this narration, mainly, to remind one of how much The Fantastic Journey changes from episode to episode, searching for some sense of identity or some certainty in its format.  Five episodes in (out of ten...), and the elements are still coming together.

In terms of the actual episode, I'd say that "A Dream of Conquest" is actually pretty strong, most notably because it is buttressed by a good, villainous performance from guest star John Saxon.  Here, he plays Consul Tarrant, a "Materran" warlord who hopes to march East across the island and conquer all the time zones between his own, and land's end.  In one splendid bit of series continuity, Tarrant asks Willaway about what he will find in the other time zones, and Willaway very pointedly and very specifically discusses the societies featured in "Atlantium," "Beyond the Mountain" and "Children of the Gods."  For a series always shifting ideas, it's nice that The Fantastic Journey remembers its history. 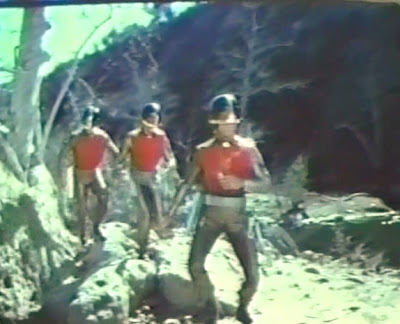 Those with only a casual memory of The Fantastic Journey may also recall this particular episode because it features a kind of dog/man/alien creature called "the Nephring."

Much of The Fantastic Journey's promotional material in the 1970s featured images of this kindly, shaggy alien.  The creature suit looks pretty good, even today, except for the one horrid moment near the conclusion in which you can plainly make out the monster's socks...
In "A Dream of Conquest," our travelers come across Materra, a "colony" of aliens from another solar system (and "another dimension," as Lianna asserts).  The peaceful ruler of the Materrans, Luthor, is deathly ill and his power-hungry subordinate, Tarrant (Saxon) has assumed complete authority.  Varian and Fred attempt to cure Luthor, while Willaway -- conducting a Mission: Impossible-style sting -- ventures out on his own to bring down Tarrant the tyrant.  Willaway assumes his dangerous assignment this because he can't stand the idea of brute force winning the day, "storming" through the zones and territorializing them, each in turn.  He tells a lovely Materran rebel that "it takes a thief to catch a thief," and begins hatching his plans. 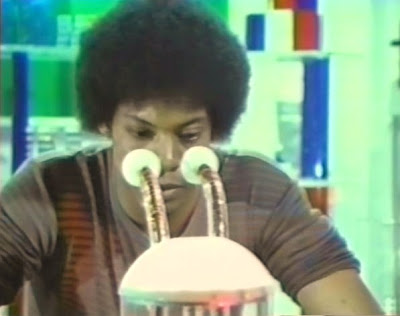 Meanwhile, Lianna and Varian watch in horror as Tarrant serially mistreats the Nephring, a being that Lianna and Sil-el have determined is both sentient and highly intelligent.

In one horrifying sequence, Tarrant's soldiers use the Nephring in a military exercise, and Varian jumps into danger (and into the line of fire...) to save the creature's life.

Of course, the subtext here involves the human (and inhumane) treatment and abuse of animals.  You shouldn't use them for target practice, and you shouldn't put them on the top of your family car either, when you go on vacation.

Okay, I made up the last part.
Most trenchantly, however, "A Dream of Conquest" studies the twisted mentality of a despot.  Saxon's Tarrant rather pointedly utilizes language we today associate with Nazi Germany, discussing the "Birth of a New Order" and ordering "purges" of his enemies.

But of course, he doesn't really have any enemies.  The other zones, as we have seen with our own eyes, are unaware of the Materrans, and either in ruins ("Atlantium," after the destruction of "The Source"), peaceful ("Beyond the Mountain") or woefully disorganized ("Children of the Gods.")  In realizing this fact, we see just how petty and ridiculous Tarrant really is.  He just wants to flex his muscles; to look like a "big man."  He imagines enemies to conquer because of his own ego and desires, not because such enemies actually exist. 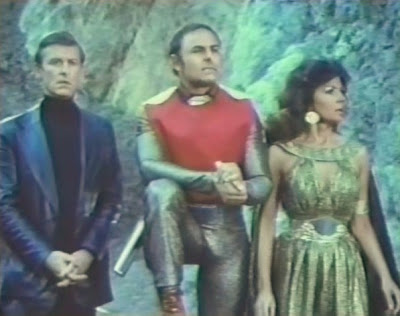 In the end, Willaway and the others restore order and sanity to the Materran Zone, and the commentary is explicitly about what happens when madmen ascend to control of their countries, a control that usually extends to the armed forces.

As Willaway says: "Ah, the generals.  They are numerous, but not good for much."

This is abundantly true in "A Dream of Conquest" because none of Tarrant's subordinates stand up to the madman when he proposes and plans  blatant aggression.  A hierarchical structure is a good thing for maintaining order, no doubt, but a very bad thing when a madman rests at the top of the pyramid, perpetually unquestioned. 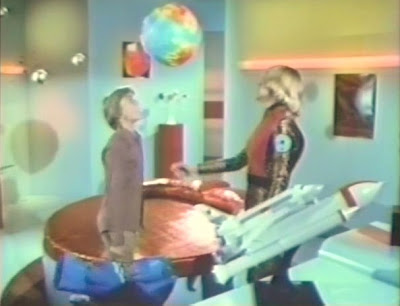 There is one very weird moment in "A Dream of Conquest:" A young Materran shows Scott a model of his colony ship, and it's clearly  a U.S. space shuttle and rocket boosters!

Although it's nice to see this now-retired ship again, the space shuttle is relatively small, and more than that, incapable of traveling from one solar system to the other.   How did Materrans and humans develop the same ship (but with such different capabilities?)  I can only guess that the prop master on The Fantastic Journey had access to a space shuttle model, and figured (since the craft was not yet in official use...) that no one would notice.
Next week on cult tv blogging, one of The Fantastic Journey's more dynamic and emotional episodes: "An Act of Love."
at February 05, 2012