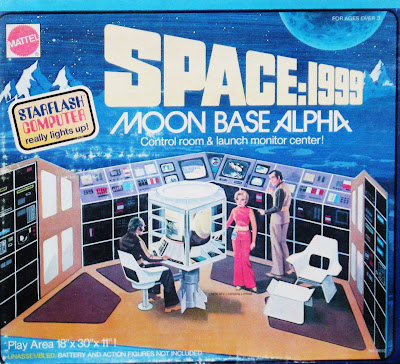 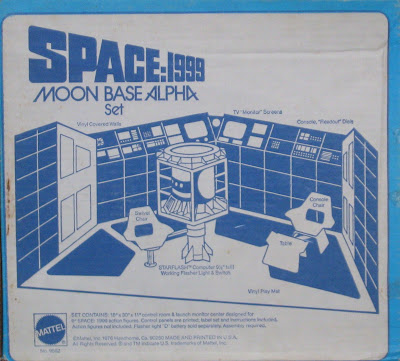 The year 1976 was America's bicentennial, but much more importantly (!) the heyday of Space:1999 toys and memorabilia.
Mattel released its three-foot-long Eagle toy in 1976 and also a line of  action figures to go with this play set, the Space:1999 Moonbase Alpha "control room & launch center."  On television, this area was called "Main Mission" and was a colossal, two-level chamber replete with big screen and observation deck. 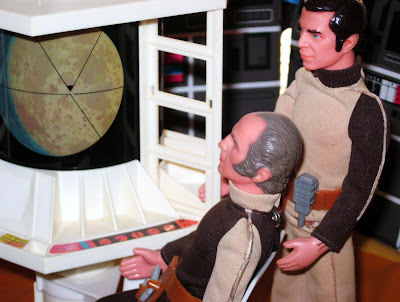 This toy doesn't quite live up to the impressive set from the Gerry and Sylvia Anderson TV series, but is a lot of fun nonetheless.
It comes with a cool "Starflash Computer" that "really lights up!" and  vaguely resembles one of Alpha's trademark "comm-posts."
Eagle-eyed collectors, however, will also notice that the Starflash computer is actually a toy re-purposed from the popular Matt Mason toy line of the sixties.
Other than the Starflash Computer, this set is basically a vinyl mat with  a swivel chair, a console chair and table, TV monitor screens, console readout dials, and vinyl covered walls.
You could apply decals to the playset, to recreate scenes from Year One of the series.  Most importantly, however, this set was a place where your Commander Koenig, Dr. Russell and Victor Bergman action figures could hang out and fight Planet of the Apes figures, or the aliens from Mego's Star Trek line. 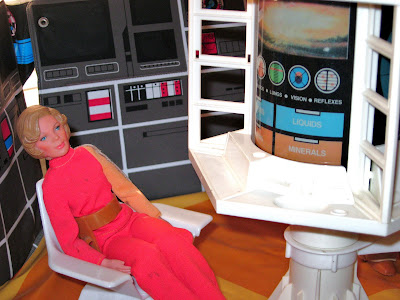 The back of the box described the set this way: "18" x 30" x 11" control room & launch center designed for 9" Space: 1999 action figures. Control panels are printed, label set and instructions included.  Action figures not included. Flasher light "D" battery sold separately."
Today, as an adult collector, I long for a more accurate representation of Moonbase Alpha, one that  captures the minimalist, Kubrickian aesthetic of the TV series a bit more closely.
But I still have a lot of nostalgia for this toy, in part because I remember seeing it in toy stores back in the disco decade and begging my parents for it.
at November 02, 2011