In the years following Star Wars (1977), outer space-related toys flooded the American toy market.  Many of these toys were what collectors today uncharitably term "knock-offs," meaning that the toys don't originate with a license like Star Wars, Star Trek, Battlestar Galactica, or Buck Rogers in the 25th Century...but from an incredible simulation.
In other words, these toys didn't belong to a specific set, but could easily co-exist with the other sets in terms of size and general "look" and vibe. 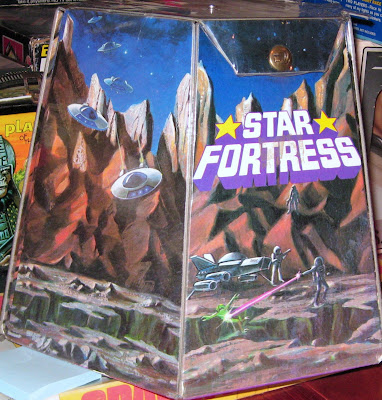 And -- I have to admit it -- I have a sort of crazy obsession for these knock-offs or so called "generic" play sets.  I guess it's because as a kid ,the knock-off toys offered me an opportunity to put  my Jedi Knights, Starfleet Officers, or Directorate Agents into "new" adventures; ones that didn't come specifically from any movie or TV episode.
A few months ago, I featured the Star Base Command Tower here, a glorious generic space play set.  Today, I wanted to remember another such toy from the same epoch, one offered only through the Sears Catalog back in the day: the Interplanetary Star Fortress.
It seems like an alien concept in the era of the Internet, but getting a Sears Catalog near Christmas every year was an incredible experience for kids back then.  I remember eagerly getting my hands on the catalog (after my sister was finished looking at Jordache jeans...) and leafing through the toy section, absolutely agog at the new toys being offered up for sale.  I remember one year, my Mom purchased for me the Star Wars Cantina, complete with Blue Snaggletooth.  The next year (I think...), I got this Interplanetary Star Fortress from the catalog.  And I loved it.
Alas, mine isn't in great shape anymore, as you can likely detect from the photos I'm providing.  If I'm correct, this particular set was sold through the "wish list" Sears Catalog for  only two-years running, both in 1979 (when it was coupled with Mego's Buck Rogers line) and in 1980 (when it was paired with Kenner's The Empire Strikes Back toys.) 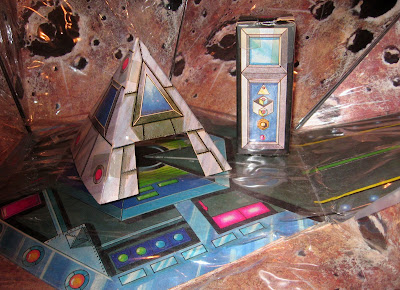 Basically, the toy is a giant laminated cylinder that "unfolds" (after turning a metal clasp) to reveal a kind of secret military base inside an asteroid crater.  Some of the detailing inside the crater looks like a landing platform, for instance.
On the outside of the cylinder, there's some groovy Star Wars era space art featuring astronauts, laser blasts, and flying saucers, plus the logo.
You can't see it on my photos, because I'm missing pieces at this point, but the set also originally came with a shuttle pod and a plastic gun turret that could sit atop the cylinder "mountain."
You can see, I hope, those particular items from the catalog photo below.  Regardless, my memory is that the shuttle pod had engines painted on the bottom, and a hatch that could open up on the side of the thing.  The photo below shows the Mego Buck Rogers figures inhabiting the base.

Finally, I think the Interplanetary Star Fortress also came with a strap, so you could carry the folded-up cylinder around with you in the back yard.  And certainly, it was large enough to hold quite a few Star Wars figures, or their like.
I'd love to get my hands on one of these Sears "knock off" play sets in decent condition, or with the missing parts from my set.  Right now, my five year old son, Joel, uses The Interplanetary Star Fortress as the headquarters for the Predacons in his Beast War battles...
at November 30, 2011

Email ThisBlogThis!Share to TwitterShare to FacebookShare to Pinterest
Labels: collectible of the week