From the Archive: Brian Johnson (February 2001) 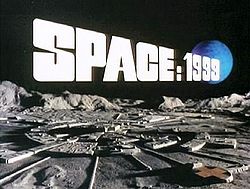 John's note: I conducted this interview with award-wining special effects guru Brian Johnson (Space:1999, Alien, The Empire Strikes Back, etc., in February 2001, via e-mail.  The subject was Space:1999, and the occasion was the new release of the Gerry and Sylvia Anderson series on DVD.

John:  After twenty-five years, the world finally seems to hve caught up with Space:1999 in some senses, with stories about the program running in The New York Times, Cinescape and TV Guide. And the series is being released on DVD. Did you know this day of re-assessment would come, and is there a sense of vindication?
Brian Johnson: I always tried to make Space:1999 a quality show in terms of visual effects. Vindication is not the word. Quiet satisfaction is probably nearer the mark.

John: Have you seen the DVDs?

Brian Johnson: I haven't, though I would like to. Every dog has his day, and the show deserves some extra acclaim. We all gave it our best bang for the buck.

John: I know you've mentioned that DVD is a different format than Space:1999 was originally intended for, and that the format throws off your "wire threshold." What exactly does that mean? 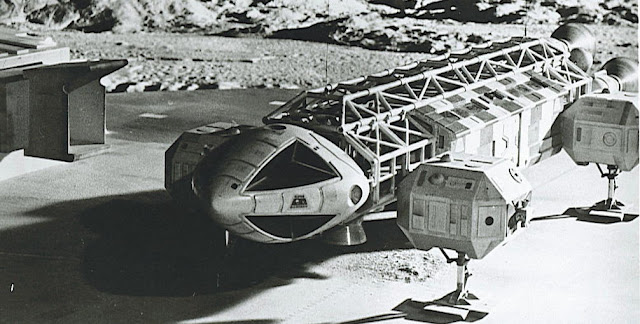 Brian Johnson: The resolution of TV images was low in those days. We had a margin with which we could view our dailies and say "That will never be seen on TV." I never re-shot stuff if I thought we couldn't improve the action, and it didn't show wires when projected at 25-30 frames per second, not rock and rolling and freeze-framing the way people do now, just to see how a shot is done. Wires were a bloody nuisance - I hated them. As often as possible, we avoided them.

Brian Johnson: I would change everything - but not completely. The Eagles would be subtly changed with better undercarriage systems and "bits" on. The Moonbase could do with a spring clean, but not too much. I liked the launch pads. The planets would be much better now. I would use a huge amount of CGI work. I would shoot digitally and make subtle camera moves to enhance production values.

John: The Eagle may be one of the most beloved and believable spaceship designs in TV history. Can you tell us how you came to design it?

Brian Johnson: I was in my "modular" design mode in those days. I reasoned that it made sense to make Pods that were interchangeable. The command pod could serve as a lifeboat, Eagles could be "chained" together, etc. I sketched the basic idea and got Michael Lamont (then a draughtsman/art department) to draw up the full scale 44" plans. I then added sections and thickened tubes until it looked "right." The final cladding was added, and then the different scale versions were finished to match the 44" model. My basic ideas came from looking at dragonflies and insects of all sorts. I copied nature to some degree - I think it made the Eagle believable.

Brian Johnson: Moonbase Alpha was an unashamed homage to Harry Lange, Tony Masters and Stanley Kubrick from 2001, with my own ideas too.

Brian Johnson: I was always about ten days behind the Main unit live action shooting, so Keith Wilson would do his thing. I tried never to interfere with his imagination, and we used the Main Unit shots as keys to our establishing shots. The trick was to "lag" the Main Unit. Also, editor Dave Lane was just the best at using everything we shot.

John: What was the one thing you wanted to do on Space:1999 that you never had the opportunity to do?

Brian Johnson: Motion controlled moves and such, but we didn't have time or money. We had just started to build our first motion control system, but it was cranky and slow.

John: At the time it aired, Space:1999 was roundly criticized for being mystical and anti-science. What do you think about such criticisms?

Brian Johnson: I have to confess that I was never really moved by the concept of Space:1999. I find the most exciting sci-fi ideas are those that obtain some semblance of reality. Frankly, the Moon traveling through space (other than in the company of the Earth) is dumb. We would have stood a better chance if we had been an Asteroid Mining Company, or something. I could have really gone to town in terms of visuals. We had good writers and good directors, and yet we never really got to know the main characters. It was all a little superficial. However, I am being picky here, and in its time, it did push the frontiers a bit. I think TV politics had something to do with the demise of the series. 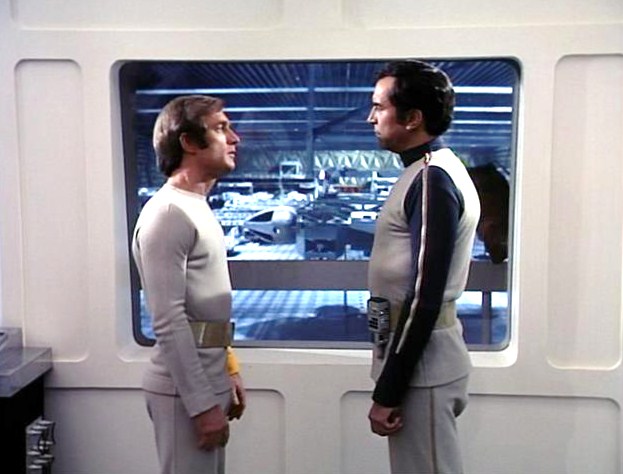 John: What were the primary strengths of Space:1999, in your eyes?

Brian Johnson: Quality and attention to detail. A whole slew of superb actors who lifted some of the more esoteric storylines. Good directors like Charles Crichton, who, because of his background, was given the weakest scripts.

Brian Johnson: We didn't really progress as we went from Series 1 to Series 2. I still feel the first series had the best stories. The whole Maya thing was just a gimmick, though Catherine was superb, and we took on board an established American script advisor who led us away from the audience we had already established. I don't know what figures were charged for each episode, but I think the quality we put out allowed a much higher figure to be charged than was actually the case. If the unit cost was less, we might have gone on for years. Hopefully on an asteroid, not the Moon!

John: Any thoughts on the fans?

Brian Johnson: I'm always amazed by the enthusiasm and loyalty shown by so many different types of people. From the absolute nutter through the sci-fi buff, to the cerebral. Even Mums have a lot of nice things to say about the show - maybe it kept their kids quiet for an hour or so. I also do not have the retention of memory for lines in the script that many fans can recite, ad infinitum. I'm always flattered by the nice things they say about Eagles and Moonbase Alpha.
at January 29, 2011