CULT MOVIE BLOGGING: Sky Captain and the World of Tomorrow (2004) 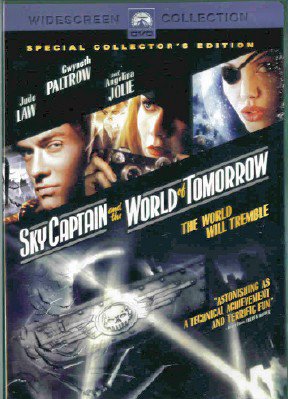 The future just ain't what it used to be...

Once upon a time, our best scientific minds (not to mention our finest pulp sci-fi writers and artists...) forecast a fantastic world of glittering, art deco skyscrapers, elegant hovering machines, Byzantine flying robots, air combat from gravity-defying aircraft carriers and other wonders.

"Things to Come," we imagined and hoped.

Well, darn it, none of that happened; those imaginings are part of a "lost future." Instead, we live in a utilitarian time in which function plays more important a role than beauty...or elegance.

But imagine, if you will, that all those technological and architectural glories and wonders did come to pass.

Imagine the beauty and grandeur of the world we'd inhabit right now if they had. If you can conceive of a 1930s-style future (not unlike Coruscant in George Lucas's The Phantom Menace...) then you have a very good idea of Sky Captain's dramatic and spectacular visual appeal.

This imaginative film - conceived and created as a labor of love by first-time director Kerry Conran -- was released in theaters about a year ago, but didn't do nearly as well as expected with general audiences. I have a theory about that. Surprised? Why, you know I have a theory about everything...

Anyway, I believe that today's audiences refuse to participate in any vision of the 1930s in regards to their imaginative entertainment, and by that I mean, in particular, science fiction and fantasy films.

Exhibit A: The Rocketeer (1991) was a great superhero movie set in the 1930s, but you couldn't pay audiences to go see it.

Exhibit B: Later in the 1990s, The Shadow (1994) and The Phantom (1996) both featured lovingly-created superhero "worlds" of the Great Depression Decade, and again, audiences stayed away in droves. You might be able to blame the perceived lack of quality of those films for their lack of popularity, but one or the other, depending on your perspective, was good enough to be a hit. I actually enjoyed both.

My so-called "anti-retro" (or pro-now-tro, if you prefer...) theory also explains the relative failure at the box office (thus far, anyway...) of Peter Jackson's 200 million dollar King Kong. Had it been set in 2005, I bet it would have grossed double what it did on Wednesday. Like Sky Captain, it imagines a world of the misty past, and asks us to come along on that nostalgic journey. I just don't think that general audiences have the patience to go there anymore...and I hate that fact. To its own detriment, America is obsessed with the new, the current, the technological, and the future. And going back to the 1930s is not something that a lot of folks want to see in their entertainment.

Which is a shame, because The Rocketeer, Sky Captain and King Kong are all magnificent efforts...amongst the finest fantasy ventures of the last twenty years, no doubt.

Sky Captain tells the story of Joe (Jude Law), his plucky reporter girlfriend, Polly Perkins (Gywynth Paltrow) and his - ahem - buddy, Frankie (Angelina Jolie), a British military officer, as they attempt to uncover the secret behind the disappearance of several prominent world scientists.

The journey to find the missing scientists leads from Manhattan to Nepal (and Shangri-La!), to a "robot master" named Totenkompf, a disenchanted genius (and Wizard of Oz-type figure...) who has been utilizing his futuristic technology to steal the world's power generators and other critical resources. Turns out he's building a giant space ark on a prehistoric island in the Pacific. That ark that will bring a new day for the planet, an opportunity to start over...but also the last day for humanity! So it's Joe, our Sky Captain, to the rescue...guns blazing...

From the opening shot, of a dirigible called Hindenburg III docking at the top of the Empire State Building, to the final locale - a primitive jungle world inspired by the lush lost world of 1933's King Kong - Sky Captain is a visual feast like nothing you've ever seen, an excavation of a future we never saw, but once dreamed of.
From the stalwart sidekick engineer named Dex (Giovanni Ribisi) to the Howard Hawks-style romantic banter between Joe and Polly, Sky Captain creates not just a lost world of 1930s-style futurism, but a nostalgic nod to the world of 1930s filmmaking...a time of black & white, fedoras, witty dialogue, "Yellow Menace" (here represented by Bai Ling's robotic assassin...) and fear of a coming tide of fascism. From script to special effects, The World of Tomorrow is splendidly realized.
I just bought the film and watched it on DVD, and I admired it even more the second time around. I saw the film originally in a "cheap seats" theater, and I don't think enough light was going through the imagery, making it appear overly dark. Glorious on DVD, the film is everything I would want in a "nostalgic" fantasy. It features charming, romantic characters; it has an innocence to it (like the original Star Wars). and my gosh, the movie includes armies of flying robots (resembling Gort...) that shoot laser beams out of their eyes. The sound effects come from the 1953 War of the Worlds! What's not to love.
If you ask me, the world needs more men (and more movies...) like Sky Captain.
at December 18, 2005