In “Spacewrecked,” John Blackstar’s lover, Katana follows his trajectory by tracing the photon vapor trail from his ship.  It leads through the black hole, and on the other side of the phenomenon she is reunited with him. They make plans to leave Sagar together. The Trobbits are heartbroken.
Their joy is short-lived, however, because The Overlord wants to possess the spaceship -- a “time ship capable of multi-verse travel” -- for his evil plans. Overlord captures Katana and hypnotizes her into stealing the star-sword.
But the Overlord hasn’t reckoned with the greatest power in the universe: “love.” 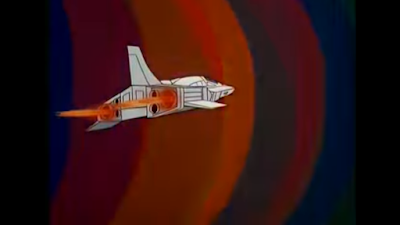 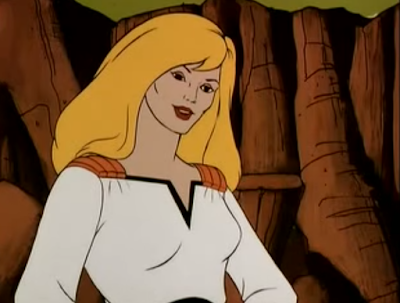 Filmation’s Blackstar focuses on Sagar, and the battle between the human astronaut and the Overlord. But in the case of “Spacewrecked,” audiences get to see a bit more detail about Blackstar’s personal life, as well as the hierarchy he operates under.
The episode starts with Katana communicating via radio to her home base, as she contemplates a trip through the black hole.
And the episode ends with the promise that she will return to help Blackstar.  She communicates again with Earth, and tells mission control “I’ll need the entire fleet for my mission. I’m going back there to help him.” 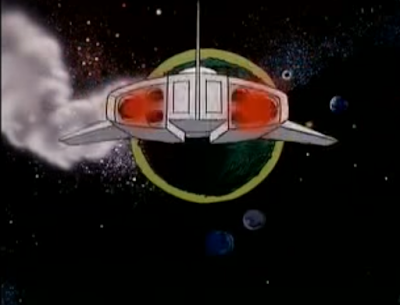 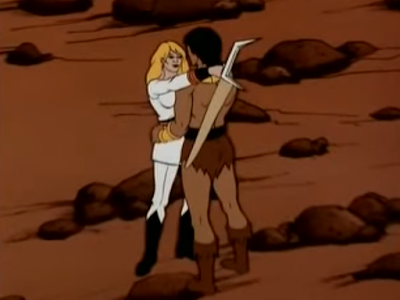 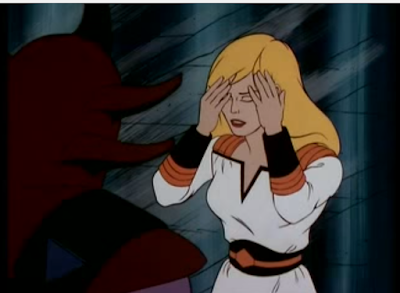 Unfortunately, Blackstar was canceled after one season of just 13 episodes, and audiences never saw Katana’s return.  It’s certainly possible, however, to imagine a final episode in which the cavalry from Earth comes over the hill (through the black hole...) so-to-speak and defeats the Overlord once and for all. Indeed, that would have been a great note to go out on, though the Trobbits would have been sad, in any regard, to see John Blackstar leave Sagar.
“Spacewrecked” is likely a candidate for “best episode” of the series primarily because it reveals that Earth has not forgotten about John Blackstar, and reveals that its technology is coveted by the Overlord as a great weapon, even though he typically relies on magic.
Finally, we meet the love of Blackstar’s life and thus can start to fill in some gaps about his background and history.
at October 16, 2021