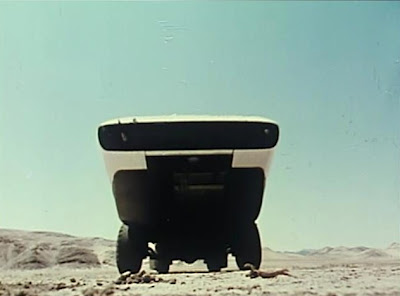 “For millions of years, Earth was fertile and rich. Then pollution and waste began to take their toll. Civilization fell into ruin. This is the world of the 25th Century. Only a handful of scientists remain, men who have vowed to re-build what has been destroyed. This is their achievement: Ark II, a mobile storehouse of scientific knowledge manned by a highly trained crew of young people. Their mission: to bring the hope of a new future to mankind.”
-          Voice-over narration for Ark II (1976) 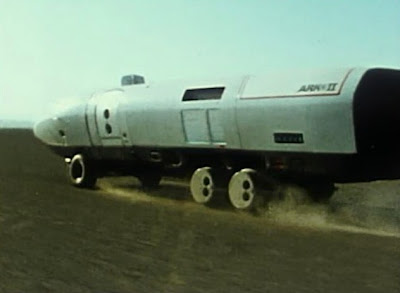 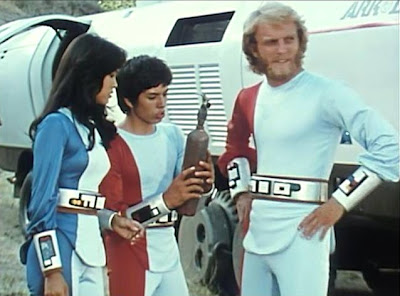 Ark II aired on Saturday mornings beginning September 11, 1976 and ran for fifteen 22-minute episodes. Like many science fiction TV efforts of the time, it was rather determinedly a “civilization of the week” program; meaning that each week, the diverse protagonists traveled (usually by a ground vehicle; sometimes on foot…) to a new and strange civilization.
Basically, it was Star Trek all over again, only without the U.S.S. Enterprise and outer space as useful backdrops.  With some variation, the format was seen in The Starlost (1973), Planet of the Apes (1974), Logan’s Run (1977) The Fantastic Journey (1977) and in the 1980s program Otherworld, to name a few examples. Star Trek creator Gene Roddenberry himself had attempted to take the civilization of the week formula to new heights with Genesis II and Planet Earth, two made-for-tv movie/backdoor series pilots from the early 1970s. 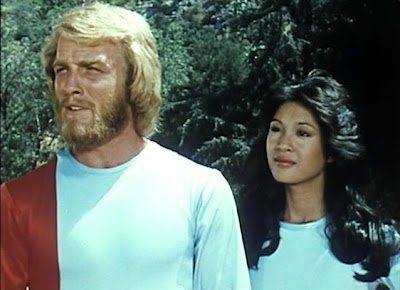 Although it aired during America’s optimistic bicentennial year, Ark II was set in the new Dark Ages of 25th century, and focused on a large, impressive, high-tech tank-like vehicle, the Ark II, which traversed the wasteland in order to aid the survivors of an environmental disaster.

In a hold-over from the popular youth movement of the late 1960s and early 1970s, Ark II’s crew is described in each week’s opening narration as a “highly trained crew of young people.”
Specifically, the crew of Ark II consisted of the bearded Captain Jonah (Terry Lester), scientist Ruth (Jean Marie Hon), and young scholar Samuel (Jose Flores).  In a weird, unspoken acknowledgment of Planet of the Apes’ continuing popularity, these young humans also traveled with a talking chimpanzee named Adam who could play chess and drive the Ark in a pinch.
You may have noticed that all the crew names listed above arise from Judaism, and thus carry resonances beyond the obvious.  In the Hebrew Bible, Jonah was a “truth seeker,” which is a term you might use for the stalwart captain of Ark II.  Ruth was the name for a “companion,” in the same text, and Samuel was a man on the cusp of two eras, the last Hebrew judge and the first prophet.  Similarly, on Ark II, the young Samuel is a child of the Dark Age who will also live in the period of the New Enlightenment, or recovery. As for the ape, he is named for Adam, the first human male. 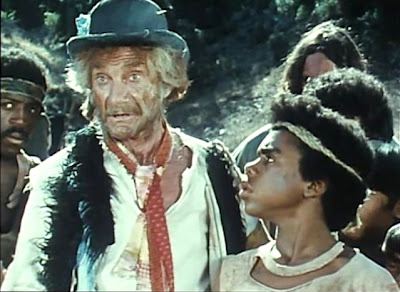 The name “ark,” of course, calls up imagery of Noah’s Ark, the craft that repopulated the Earth after a disaster, the Great Flood.
The first episode of Ark II is called “The Flies.” Written by Martin Roth and directed by Ted Post, it finds Captain Jonah recording his log entry numbered 1444. The Ark is patrolling Sector 83, Area 12, investigating a gang called “The Flies” that is responsible for “serious infringements on the rights of the others.” The assignment: bring “discipline” and “reason” into their lives.  The name “The Flies” conjures images of William Golding’s novel Lord of the Flies (1954), which also concerned a society of children.
Unfortunately for Jonah, the Flies -- an interracial gang of youngsters -- are entirely loyal to their leader, a rapscallion named Fagan and a scoundrel played by the one-and-only Jonathan Harris, Lost in Space’s Dr. Smith. Fagan is named after Charles Dickens’ famous Oliver Twist character Fagin, a “receiver of stolen goods” and man who encourages a life of crime in children, turning them into thieves.  In Ark II’s “The Flies,” Fagin and his group of thieves discover ancient poison gas canisters, ones that are still functional. 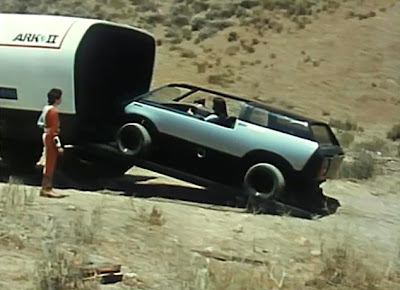 After capturing Jonah, Fagan takes the poison gas cylinders (and a gas mask to protect himself), and heads to the HQ of a local warlord Brack (Malachi Throne), who lives in the “the Village of the Lords,” actually the Ape City set from the live-action Planet of the Apes TV series and films. Fagan believes he has found “the ultimate weapon,” and attempts to wrest control of the warlords from Brack. Brack beats Fagan at his own game, however, and captures the Flies, forcing Fagan to forfeit his leadership
Ruth, Samuel and Adam save Jonah and free Fagon and the Flies from warlord subjugation.  They also retrieve and dismantle all the dangerous gas canisters without ever resorting to violence. Instead, they neutralize the gas and change it into Nitrous Oxide (laughing gas). 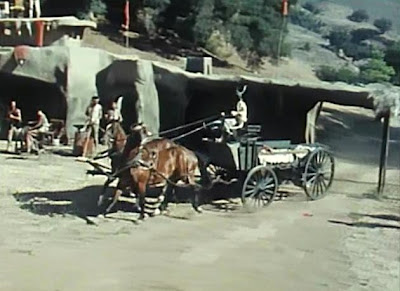 Finally, the episode ends with a moral statement from Jonah: “weapons man creates to use against others can easily be turned against himself.”
Although the series is now over forty years old, the look and production design of Ark II remains admirable.  The main cast, for instance, wears skin-tight and attractive space-age uniforms with computerized belts and cuffs (replete with wrist communicators).

One can see how this design influenced later Star Trek outings, including The Motion Picture (1979).  Also the exterior, post-apocalyptic set design is kind of interesting: a mix of the Old West, Vikings, and the aforementioned Planet of the Apes. Interestingly, Ark II presages the barbarity and chaos of The Road Warrior (1981) on a TV budget and within TV restrictions. 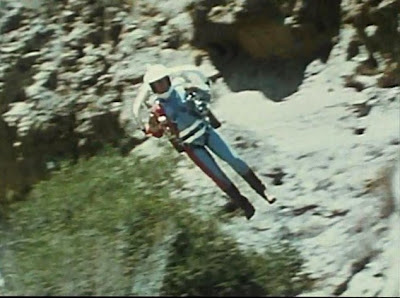 The Ark II itself, built by the Brubaker Group, remains a remarkable piece of hardware, a life-size, operational vehicle. It looks thoroughly convincing….especially in motion. In the series, this high tech truck is equipped with a protective force field.  The Ark II also billets a smaller exploratory vehicle, the fast-moving roamer.
I find it fascinating that Ted Post directed this premiere episode of Ark II.  A veteran director of The Twilight Zone and Boris Karloff’s Thriller, his movie career had taken off in the early 1970s with Beneath the Planet of the Apes (1970) and the Dirty Harry sequel, Magnum Force (1973).

Given this impressive CV, it’s odd that, by 1976, Post was helming Saturday morning television. He does a good job handling the actors and action in “The Flies,” and of introducing all of the various tech, from the Ark itself, to the roamer, to Jonah’s rocket pack (which looks identical to one used on Lost in Space years earlier.)
at October 03, 2020