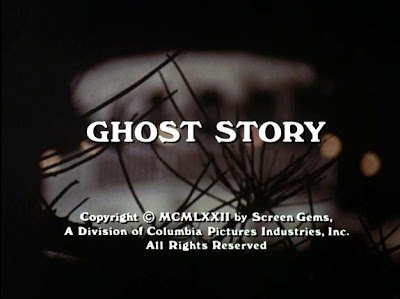 Ghost Story/Circle of Fear (1972 – 1973) represents the TV collaboration of William Castle, the great 1950s exploitation showman responsible for “Emergo” and “Percepto,” and Richard Matheson, brilliant scribe of The Incredible Shrinking Man (1957), The Omega Man (1971), The Legend of Hell House (1971) and Somewhere in Time (1980), among others. 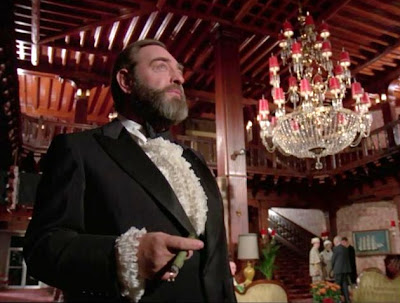 The TV series -- a one-hour horror anthology -- ran for just one season on NBC in the early 1970s, and starred (as host) actor Sebastian Cabot.  He played “Winston Essex,” the “old world aristocrat" and owner of the upscale hotel/bed-and-breakfast called Mansfield House.

In each episode of Ghost Story, Mr. Essex would reveal an unusual and macabre story about his various guests.  This aspect – the host and his world – were dropped from the series entirely when it transitioned into Circle of Fear after fourteen hour-long episodes.
As Ghost Story geared up for broadcast, co-creator and producer William Castle wrote that it would involve “strange happenings” and “ordinary people,” and that his intentiion was “not merely to shock or scare, but to do it in a fun way. Like a ride on a roller coaster.  You scream and you laugh.” (John J. O’Connor, The New York Times: “Cabot in Ghost Story, A Chiller Series,” September 29, 1972, page 87).
Despite the promise of a good time, the series was not particularly well-received by critics, though this is hardly unexpected given the mainstream perception of the horror genre during that time period.  Time Magazine noted that “week after week, this is perhaps the silliest of all the silly hours on TV.” (December 18, 1972, page 67).  The New York Times reviewer, O’Connor, reported yawning “once or twice” during the series, and that “Sometimes the ghosts work.  More often they don’t.”
The pilot episode for Ghost Story, titled “The New House” (or “Pilot”) was based on the English author Elizabeth Walter’s story She Cries, and it aired originally not as part of the series proper, but earlier – on March 17, 1972 -- as the first hour of a two-hour special entitled Double Play.  The second hour presented the pilot for the Trucker series Movin’ On. 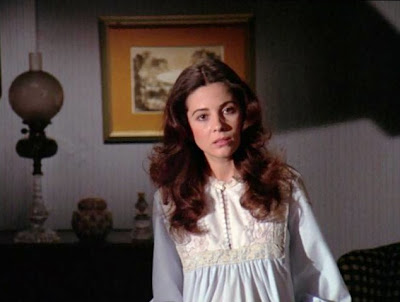 In “The New House,” directed by John Llewelyn Moxey and adapted by Richard Matheson, the Travis family moves into its newly constructed modern home, which sits atop the peak of picturesque Pleasant Hill.

When expectant Eileen Travis (Barbara Perkins) begins hearing ghostly noises at night, she grows convinced that the new home is haunted.  She soon visits a local historian, De Witt (Sam Jaffe), who tells her that her home is actually built over a two-hundred year old gallows, the very spot where a defiant, unrepentant thief, Thomasina Barrows (Allyn Ann McLerie) was hanged on March 2nd, 1779.  Upon her death, she swore to one day return…
Disturbed by her frequent night terrors, Eileen goes into labor and has a beautiful baby girl.  Things seem happy for a while, until a dark night when Mr. Travis (David Birney) can’t seem to get home from work, and Thomasina makes her ghostly presence known… 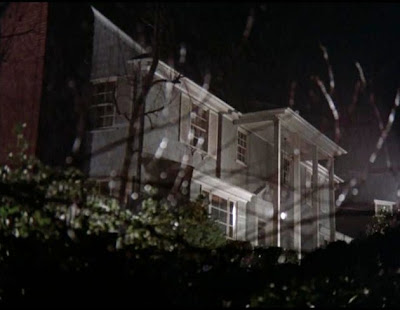 “The New House” is an effective horror tale that, in some ways, reflects the aesthetics of Rosemary’s Baby (1968).  Here we have another pregnant woman, spending her days alone, worrying about things.  And in that state of anxiety, she encounters the supernatural.  Of course, from the perspective of others, Eileen Travis seems unstable, and it’s easy to write  off that instability as a sign of her “condition.”
In fairness, Mr. Travis is not evil, as Rosemary’s husband was in the classic Polanski film, but he’s not very useful to have about., either  He tries to patiently respond to his wife’s situation, but never cares enough to stay home from work, for instance.  Thus, Eileen’s feelings of isolation are powerfully-wrought in the episode.
Some of the visuals are nicely vetted too.  Eileen brings home a creepy statue at one point in the story, and when she hears ghostly singing inside the house at night, the visuals suggest the statue is, itself, vocalizing.  There are also some nice cockeyed pans across the exterior house, ones that suggest, in essence, that the house is off-balance, off-kilter. 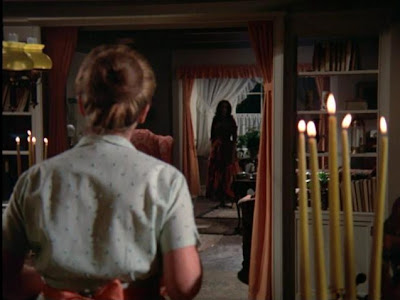 The punctuation of all the horror comes when the ghost of Thomasina Barrows appears (in a thunderstorm, naturally), but we don’t see her face.

Instead, we observe a shadowy, still figure in a long shot, at some distance from the camera.  The Travis’s maid actually speaks to her, believing she is speaking with Eileen, not a ghost.  It’s a creepy, creepy moment as you come to realize that the malevolent ghost is arranging to be alone in the house with Mrs. Travis and her innocent baby.
“The New House” also doesn’t fail in terms of commitment to the genre.  Something diabolical and awful happens at episode’s end regarding Thomasina’s encounter with Eileen and her daughter, and Ghost Story doesn’t back down from it.   Although I didn’t see the episode when it originally aired (I would have been three…) I can certainly imagine watching this pilot at night -- in the dark -- and being creeped the hell out.
In terms of series continuity, this first Ghost Story installment, introduces audiences to Winston Essex, the “host” of Mansfield House. He’s quite different from other series hosts, namely the macabre Alfred Hitchcock and the ironic Rod Serling.  Instead of taking on a tone of detachment or even black humor amusement, Essex exhibits concern and sympathy for the characters in his plays.  “I wish they weren’t going there,” he worries for the Travis family, off to their new home on Pleasant Hill. 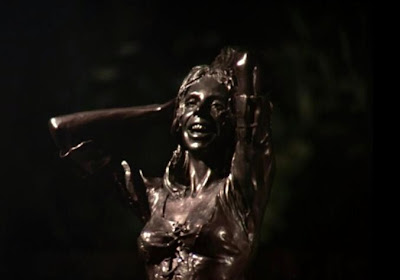 Also, Essex describes himself as a “devious dinosaur” and discusses the incompatibility between Gothic tales and “the nuclear age.”  In a real sense, that’s the terrain Ghost Story wishes to tread.

The series hopes to bridge the gap between modern reason and science, and our ancient, campfire fears of ghosts and goblins.  This idea recurs several times throughout the short-lived series, and I'll be sure to bring it up again when it does.

Importantly, “The New House” sets its horror inside a modern house, one that has never been lived in before.  It boasts all the modern conveniences of the 1970s, from telephones to dish washers.  And yet despite such comforts, something terrifying and ancient – from an age past – infiltrates the family’s life.
“The New House” is well-written, scary, and effectively shot.  The story is solid, if not revolutionary.  In short, it’s a pretty good start for Ghost Story.
at October 12, 2020