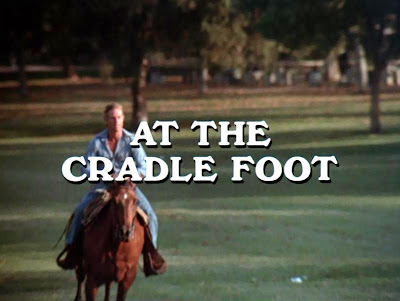 This episode arrives courtesy of writer Anthony Lawrence, the prolific author and creator who also crafted the 1972 paranormal series, The Sixth Sense, which starred Gary Collins as paranormal investigator Dr. Michael Rhodes.
“At the Cradle Foot” feels very much like it could have been an episode of that mostly-forgotten series, as it revolves around a disturbing psychic vision, or premonition.  Here, Paul Dover (James Franciscus) begins to experience recurring dreams that involve his five-year old girl, Emily (Lorie Busk). 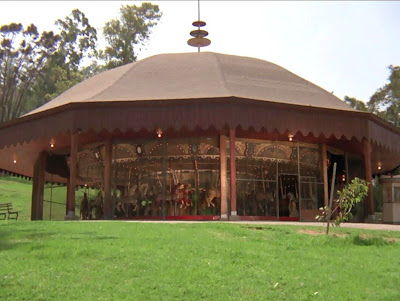 Paul envisions her as a twenty-five year old woman (Lisa James) riding a merry-go-round in an idyllic small town in Wyoming.  As she rides, however, the adult Emily is gunned down by an angry boyfriend named Rafe Norris (George McCallister).  In this psychic phantasm, Paul watches his daughter die.  As Emily passes away, she calls to her father for help, which Paul can’t provide.
This vision is no small matter for Paul because, some years earlier, he experienced a vision that his father would die in a plane crash.  That vision came true, and he has regretted since that he never warned his father about what he saw.  He is determined not to make the same mistake twice.  Paul’s estranged wife, Karen (Elizabeth Ashley), however, fears that he is finally losing his grip on reality.
Unwilling to take a chance with his daughter’s life, Paul heads out to that picturesque town in Wyoming, and attempts to change the direction of fate.  He learns that Rafe Norris has not yet been born, but that his father, also named Rafe (Jeremy Slate), is planning to marry a beautiful young girl who runs a local bed and breakfast, Julie Barnes (Meg Foster).  Paul determines that if he steals Julie away from Rafe, then Rafe Norris Jr. will never be born, and his daughter will never be imperiled.
But it doesn’t quite turn out that way… 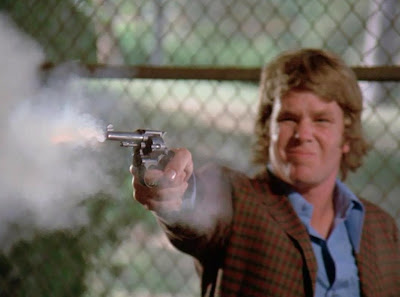 It’s a nice change of pace to get away from beckoning, wailing ghosts this week (though the program is called Ghost Story), and there’s an almost Shakespearean sweep to Paul’s difficult dilemma, which interacts with his obsessive personality.  He is trapped by grinding gears of fate, and every decision he makes seem only to doom his daughter further, adding another nail to her coffin, as it were.
As a committed and concerned parent, I completely understood Paul’s urgency to “do something now” rather than wait patiently for fate to unfold, as his wife urges.  Paul can’t even stand the remote possibility that the vision could come true, and so starts to intervene in events and lives where, bluntly speaking, he has no business.  He breaks up a romantic relationship, and kills a man (in self-defense).
Although the vision is two decades off, Paul wants to fix the world now. He is thus impatient and intemperate.  And because of these qualities, each time he makes a change, the vision of Emily’s death only comes back stronger.  The metaphor of the merry-go-round works very well expressing this character weakness.  Paul goes round-and-round, trying to catch up to fate, but he never gets any closer to altering it. 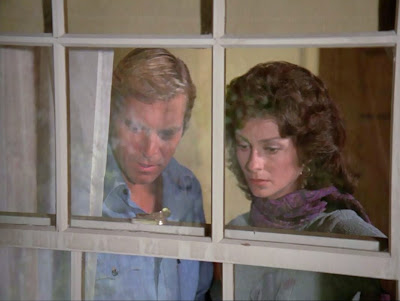 If you think about it, Emily might never head off to Wyoming in the first place were it not for Paul’s interference here.  Even more so, fate seems like an abundantly resilient opponent.  It appears to have a purpose, a direction, and a drive, and every action that Paul undertakes only backfires.
Given that fact, it is entirely appropriate that the final decision in the episode involves Paul pulling back.
He decides to “let go” at his wife’s urging, finally aware that he can’t control the world. The deadly events are not to occur for twenty years, and that leaves plenty of time for the Dovers to warn their daughter, and make certain that she is not murdered.
Eventually, Paul sees the wisdom of this guarded approach, especially when the alternative is to shoot a pregnant woman and kill the baby growing in her womb.  That’s a bridge too far, even for him.
My only quibble with “At the Cradle Foot,” I suppose, is that it feels like the episode needs one final twist.  The episode boasts twists and turns galore leading up to the conclusion.  But then Paul’s wife convinces him they just need to “stay alive” for twenty years to warn Emily of the danger as the date of her doom draws near.  After this epiphany, we see the reunited couple get into a car and drive away, past the ominous merry-go-round…one more time 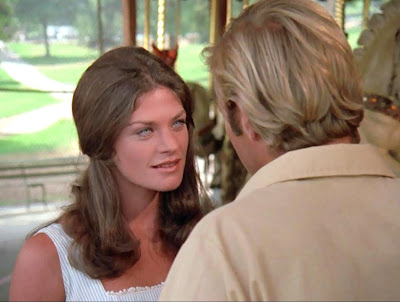 At this point in the tale, I was certain the couple would die in a car accident, and the vision would go unreported and unresolved.
Instead, the episode merely ends, with the idea of premonition -- and the Dovers’ survival for the next two decades -- unresolved.  I’m all for ambiguity, but I just felt that the story needed a final punch heading into its finale.
Still, I get and appreciate the point Lawrence forges in “At the Cradle Foot.”  Sometimes by acting impulsively, we bring on our own disasters, when a wait and see attitude would better serve all parties.
at October 16, 2020