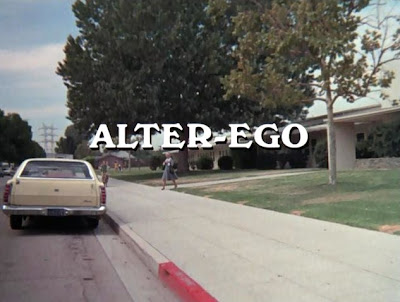 This week, Ghost Story/Circle of Fear fires on all thrusters with the chilling “Alter-Ego,” a macabre story about a kindly old school teacher named Miss Gilden (Helen Hayes) who unexpectedly grapples with a young student’s villainous doppelganger. 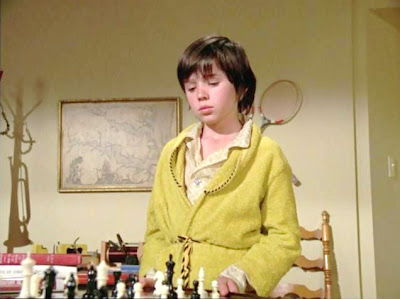 At Mansfield House, our host Winston Essex (Sebastian Cabot) introduces the episode. Essex discusses the origins of chess, a deceivingly “harmless” game.  But, he notes, chess is based on war games: attack, defend…capture…checkmate.  It requires two players “under ordinary circumstances,” he opines, but in the upcoming story, the circumstances will be far from ordinary…
The horror commences when young Bobby Cameron (Michael-James Wixted) is sidelined by an accident and forced to stay home from school for a long stretch of time.  Bobby’s parents don’t know how to relate to the boy, or even how to really talk to him, and the boy’s loneliness grows and grows and grows.
One day, while playing chess by himself in his room, Bobby is surprised to see an exact duplicate appear there.  Unlike the real Bobby, the doppelganger is sinister, secretive, and tricky.  Worse, the evil double seems to know all of Bobby’s thoughts. 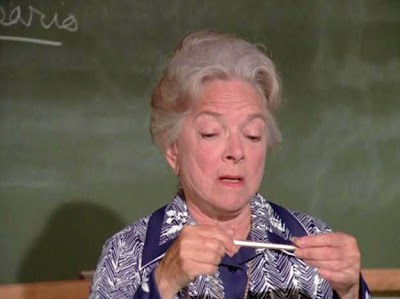 When Bobby innocently makes a remark about how much he likes his elementary school teacher, Miss Gilden, the sinister twin heads off to school to make the instructor’s life a living hell.  The doppelganger quickly proves a distraction in class, but then sets about framing Miss Gilden for using force against him.  His plan is successful, and Miss Gilden is fired from her long-held teaching job just months short of her retirement.
At the Cameron home, meanwhile, Bobby grows more and more afraid of his duplicate.  The evil double kills the family cat and then turns his attention to Bobby.  Bobby realizes that he is indeed weakening, losing strength to his ever-more powerful double.  With little time left before he passes away, Bobby challenges the doppelganger to a game of chess…a battle of wits.  The evil twin agrees to the contest, unaware that Bobby boasts a secret ally… 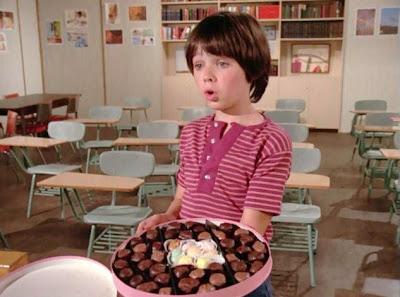 When Ghost Story works…it really works, and “Alter-Ego” proves an excellent reminder of this quality.  This episode is absolutely riveting as Miss Gilden and the sinister Bobby duplicate play a real life game of chess, matching move and counter move perfectly.  The performances by Hayes and Wixted are more than equal to the material, and the teleplay by Dorothy Fontana is very strong too.  The story itself is based on a literary work by Stanley Ellin (1916 – 1986), and in 2001 I had the chance to ask Fontana about her contributions:
“It was based on a short story, and I had to develop the script out of that story.  It only had to be an hour long, but much of what goes on in a short story is internal.  I had to externalize much of the story.  And then when I heard Helen Hayes was going to do the episode, I was just thrilled.  I didn’t even conceive that she might be willing to do our little TV show, and when I saw it, I thought she was just wonderful.” 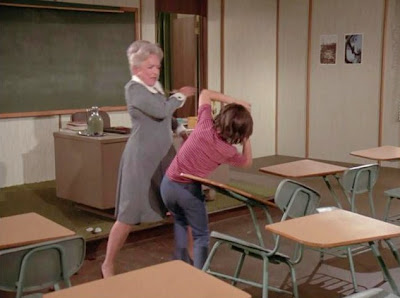 The “evil child” represents one of the great pop culture tropes of the 1970s, appearing in films and television series such as The Exorcist (1973), Space: 1999 (“Alpha Child”), and The Omen (1976) to name just three.  “Alter-Ego” is a highly cerebral variation of the tale, but also an expression of the idea that all children boast a good and a dark side.  Only in this case, the dark side is externalized as a separate (and murderous) entity.
“Alter-Ego” captures our attention so easily and so fully because Miss Gilden is a charming, sweet, old woman, and does nothing to deserve the evil “attention” of Bobby’s double.  Any time Miss. Gilden attempts to fight back, she risks censure and unemployment.  The evil child realizes this fact of course, and keeps staging threatening incidents which require super-human patience from Miss. Gilden.
Those moments will require super-human patience from you as well, as it becomes increasingly clear that Gilden is falling right into the sinister double’s trap.  The episode’s final battle -- which involves the unexpected appearance of one of the dramatis personae -- does a great job of getting across the message that an evil child is nonetheless a child…and should be treated (and disciplined) as such.
Along with “The Dead We Leave Behind” and “House of Evil” (which also involves a child), “Alter Ego” remains a high point for Ghost Story.
at October 13, 2020