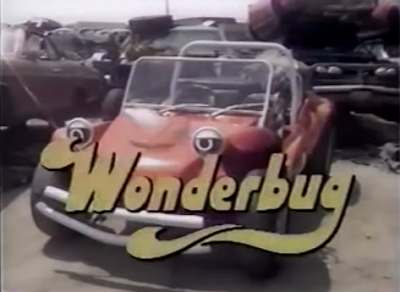 I will make a confession right now.
Wonderbug (1976-1978) was never my favorite Sid and Marty Krofft live-action Saturday morning series.
That honor goes to Land of the Lost (1974-1977), but I would also take Dr. Shrinker (1976), The Lost Saucer (1975), Electra Woman and Dyna Girl (1976) and a few others over Wonderbug.
I recently screened an episode of Wonderbug, “The Incredible Shrinking Wonderbug” and came away with the same feeling.  The series has three generic teen leads, and a mild fantasy element: a schleppy car that turns into a superhero car.  But the stories are dumb and the humor feels antique by today’s standards.
For me, it’s more than that. It’s that there’s no real dramatic hook here.  In Land of the Lost, for example, the Marshalls want to find a way home (not to mention stay alive...).  In Dr. Shrinker, even, there’s a villain to outwit, and the need to restore the Shrinkies to their normal size.
Wonderbug is just a bunch of zany, silly adventures, with no real rules or consistent universe.  In noting that, I sure feel like a humorless bastard, though  I can tell you that I always watched Wonderbug, even though I never really liked Wonderbug.
Wonderbug aired as part of The Krofft Supershow (1976-1978) for both seasons that the omnibus aired, and garnered such a devoted following that a great deal of merchandising was produced for the series, including a board game (from Ideal), a lunch box, and even a comic-book.
The basic premise of the series is that a magic horn transforms a dilapidated old dune buggy called Schlep Car into the shiny super-heroic vehicle, Wonderbug.  (Think: Herbie the Love Bug).
Three hapless American teens then travel with Wonderburg on his journeys: Barry (David Levy), C.C. (John-Anthony Bailey) and Susan (Carole Anne Selfinger).
Each week, the car and its occupants get into trouble, trouble that requires fixing by Wonderbug. 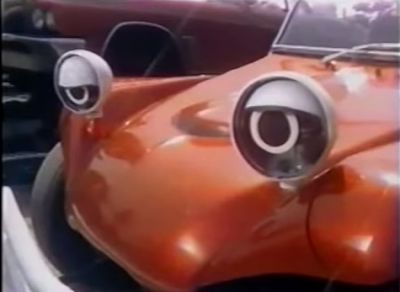 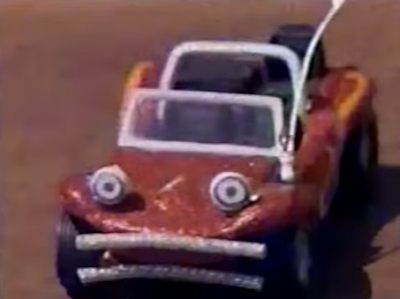 In terms of special effects, Wonderbug, like Land of the Lost and Dr. Shrinker, makes heavy use of chroma key.  In the scenes featuring a flying car, for instance, a shiny toy dune buggy is chroma-keyed over a live-action background, and, well, it’s pretty obviously a toy.
The toy dune buggy (presumably remote-controlled) is also used in some scenes wherein Wonderbug performs tricks, like rearing up on its back wheels.
In one episode, “The Incredible Shrinking Wonderbug,” Barry learns that a villainous client, played by Gordon Jump, is stealing cars and then shrinking them down (using a Mego Star Trek Phaser Target gun, only slightly redesigned…). 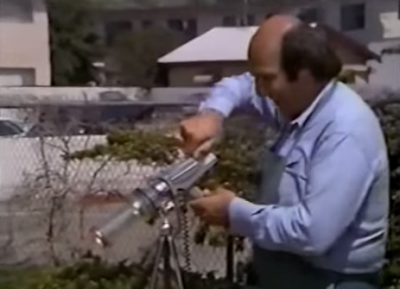 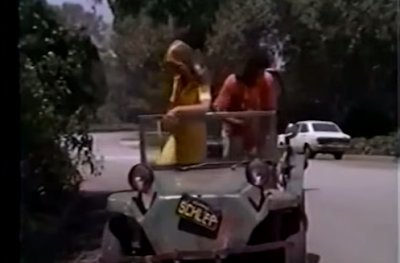 The gang tries to bust the auto theft ring, but Schlep Car – who has a “hood” cold -- is shrunken down to tiny proportions too.  Now Wonderbug’s human friends must save their friend and stop the criminals.
It’s a weird, and horribly shticky half-hour, I must observe. Or, to put it in terms of the dialogue, “this is not your average, run-of-the-mill turkey.”

For me, Wonderbug is one of those Saturday morning series like Big John, Little John (1976), better remembered as nostalgia than necessarily enjoyed in the present.