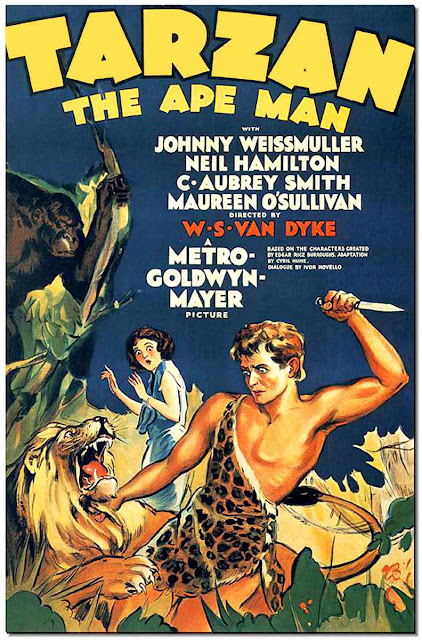 Young Jane Parker (Maureen O’Sullivan) joins her father, James Parker (C. Aubrey Smith) and great hunter Harry Holt (Neil Hamilton) on a safari to the Great Escarpment and beyond to discover “the secret graveyard of the elephants,” where ivory is so plentiful it could “supply the world.”

But she also encounters a wild jungle man -- Tarzan of the apes (Johnny Weismuller) -- and becomes fascinated with him.

Tarzan kidnaps Jane for a time, but reveals his gentle and protective heart, and the two begin to fall in love.

And, as Jane soon learns, Tarzan is also able to communicate with the animals of the jungle, including apes like Cheetah, and elephants.

Soon, however, Jane, Harry, and James are attacked by hostile pygmies, and taken to a village where they are forced to combat a deadly gorilla in a pit.

Tarzan comes to the rescue with an army of elephants, but Jane’s father dies.

James Parker is buried in the elephant graveyard, which Tarzan protects, and Jane decides to remain with Tarzan in the jungle while Harry begins the long journey home. 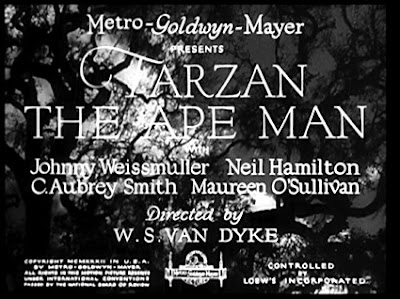 Tarzan the Ape Man (1932) is a good starting point for the cinematic adventures of Johnny Weismuller’s Tarzan and Maureen O'Sullivan's Jane, but not, ultimately, as strong a work of art as its amazing 1934 follow-up, Tarzan and His Mate.

The first is the remarkable chemistry between Weismuller and O’Sullivan.

There’s a scene here in which Tarzan and Jane frolic in a river together, and it is downright electric; cinematic foreplay of the highest order.

The scene works so effectively because of Tarzan’s abundant physical strength and sense of playfulness, and Jane’s sense of emotional, mental strength.  She keeps resisting Tarzan, for fear of giving in, and he keeps pulling her closer.

I could watch Weismuller and O’Sulivan in these roles forever, and not get tired of their interplay. 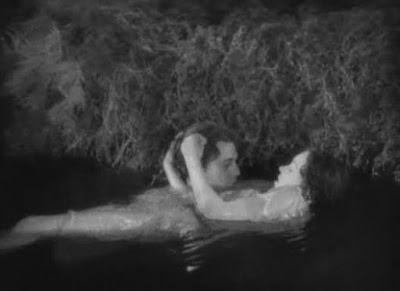 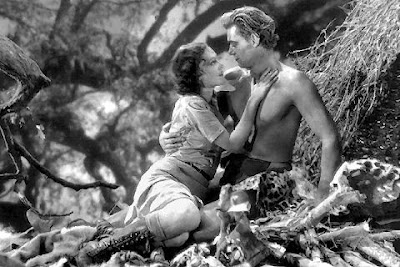 And the second value apparent in Tarzan the Ape Man is the absolute resourcefulness of the production.

In this regard, the film crew never actually left California, and yet a wild eco-system is depicted well via stock-footage, rear-projection, matte paintings, trained animals, and wooded locales.  The film’s action is also intense, and virtually non-stop. Today we are used to and even inured to films that move a mile-a-minute, and yet Tarzan the Ape Man, made nearly ninety years ago, still moves at an amazing clip.

The black-and-white photography mostly hides the seams in terms of matte paintings and stock footage, and the stunt work is exquisite. Only occasionally can one make out (in the distance) that Tarzan is swinging from a trapeze, and not a vine.  The scenes with Tarzan outrunning or fighting animals are mostly very effective, and convincing. 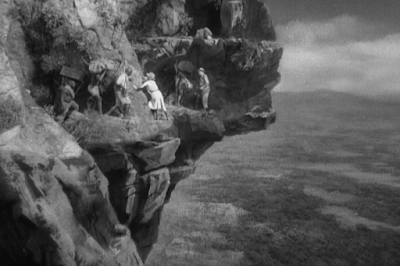 It is true, alas, that Tarzan the Ape Man is racist and sexist in the ways one might entirely expect of a film crafted in 1932.  The film’s finale features pygmies who are actually Caucasian dwarfs in black-face make-up, for example.

And upon Jane’s first appearance in the film, there is a visual joke about her luggage, and the fact that, as a woman, she has over packed for her stay in Africa.

Without being an apologist, I hope, I would simply note that Tarzan the Ape Man, like all works of art, is a reflection of the time period that produced it. You may be shocked at some moments, such as the one in which black safari servants are whipped by their white masters, or a character openly expresses the idea that only white people have feelings. This is a reflection of racial ugliness that has existed too long.

The film certainly isn’t PC, either.

One action scene sees the hunters (including Jane) killing an attacking group of swimming hippos with their rifles. No such scene featuring humans slaughtering animals (even unfriendly ones) would pass muster in Hollywood today. 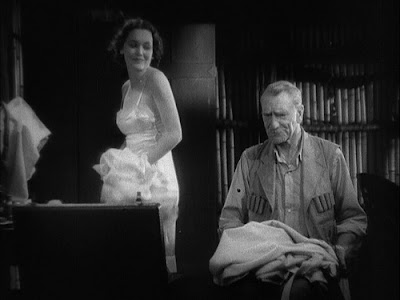 A pre-code film, Tarzan the Ape Man pushes the envelope in terms of Jane’s character in several ways. She strips down, for instance, in the Residency, and is seen wearing a very sheer slip. She leans over, in front of the camera, and little is left to the imagination.

In broader terms, Jane and Tarzan clearly have “relations” in the film, without the word “marriage” ever entering the picture.

In some ways, the depiction of Jane is, actually,  rather progressive. She is depicted, for example, as a great shot with a rifle.  Also, she ultimately decides, without male interference, what she wants in terms of a future. She doesn’t let some external sense of “civilization” impact her choices.

Also, Jane gets the most, and best dialogue in the film, perhaps because Tarzan is mostly reduced to grunts and gestures. The film defines her, in terms of dialogue, as “capable and strong.”

Here, Tarzan is not the dignified, English-speaking character of Burroughs, but more a traditional wild man.  As the film series go on, we see that Tarzan possesses a very pronounced moral code, and sense of right and wrong. He is not a savage. But he is also not a product of WASP culture.

What makes the Tarzan myth, as embodied in this film, so compelling? 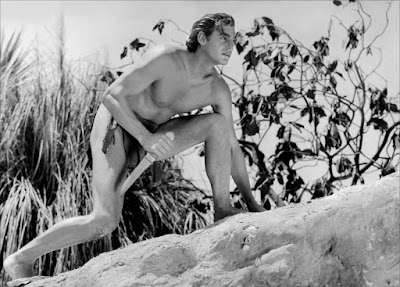 For one thing, this is a story of frontier’s edge. Tarzan lives far “beyond the last outpost of humanity” at the Great Escarpment, a “sheer cliff, which legend says rises from the plains to support the stars.”

He lives in a place of exploration, beyond the rules and bureaucracy of modern human culture.  In that place of legends there is the promise of lost treasure, golden cities, forgotten people with strange customs, and animals never before seen by human eyes.  This is the “heart” of adventure: a location on the very edge of the world.

Also, Tarzan, at least seen here, is visual human evidence that there is another way to live. Tarzan lives in peace and communion with the animal world. This is not to say that there aren’t battles with lions, crocodiles, gorillas and the like, only that Tarzan respects the rues and inhabitants of the jungle, and they respect him.

There is a refreshing straight-forwardness, let’s say about these rules, or laws. In all the MGM Tarzan films, duplicity, betrayal, avarice and other negative human traits only come into the picture with the arrival of white men.

Tarzan is also a paragon of the male of the species. He is strong, courageous, true-of-heart, faithful, and endlessly loyal.

All the things that make a man act contrary to that nature in the “stone jungles” of modern life have not turned his heart away from purity.  He is not reduced by the smallness of civilization, but rather the king of the jungle…as big and heroic as can be.

Clearly, Tarzan is a wish fulfillment figure for men and women.

Men want to be him, and women want to be with him, as has often been stated of James Bond.  Why is Tarzan attractive to women, generally?

According to my wife, it is because he loves Jane without reservation, without end and would sacrifice his life for her…literally on a daily basis. He is beautiful, physically, and offers her complete, unconditional adoration and commitment. He has eyes only for her.  He forgives her, too, when she trespasses (see: Tarzan Finds a Son).

Tarzan and the Ape Man introduces the franchise’s cast of characters and environs ably,, despite the fact that time has (rightly) passed by some of its observations about race and sex.

As I noted above, I prefer the second film, Tarzan and His Mate, but this film nonetheless made history and began a long, successful run of adventure films in the 1930s.
at June 22, 2020