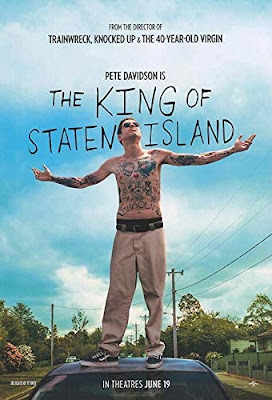 The King of Staten Island Proves There Are Few Lost Causes

Actor/writer Pete Davidson, during his time on Saturday Night Live and within his very public life, has built the persona of a millennial slacker, one medicating with weed to maintain, and lacking the motivation to conform to society's standards. His comedy is unfiltered and child-like, most represented by his character Chad on SNL, who agrees to everything because he's too stoned to comprehend. Matching up with comedy superstar director Judd Apatow for The King of Staten Island, Davidson tweaks his characterizations and breathes humanity into them to form a tender and hopeful protagonist in a surprisingly winsome dramedy semi-autobiography, co-written by Davidson with Apatow. 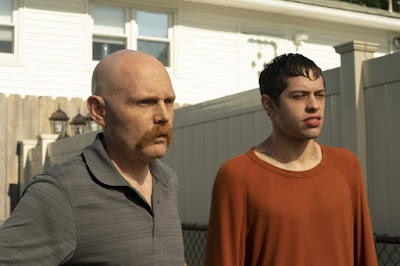 Man-child Scott (Davidson) is a veritable loser and freeloader, with no purpose or drive to move beyond his stale life of stoning, amateur tattooing his own and his friends' bodies, and living at home with his mother. His firefighter father died on the job when Scott was young, and his mother (Oscar winner Marisa Tomei) has become an enabler. Scott can't commit to his girlfriend Kelsey (Bel Powley, The Diary Of A Teenage Girl) and uses his aliments and tragedies as crutches to live out his Peter Pan fantasy. His sister (Maude Apatow, the director's daughter) has long tired of his crap and worries about going off to college and leaving her sibling and mother in a co-dependent mess. The introduction of an interloper (Bill Burr), a slightly duplicitous and volatile firefighter who starts to date Scott's mother, sets Scott on a collision course where he'll have to either grow up or completely spin out. 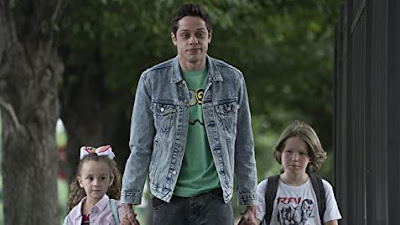 Like Shia LaBeouf, who earlier this year psychoanalyzed his own childhood with his dad by writing and starring in Honey Boy, Pete Davidson gives the impression that through his script, he has taken a long hard look at his life and how his own childhood traumas have crippled him in ways, exploring how to escape a box into which he may feel he has locked himself. Davidson, who lost his own firefighter father on 9/11, takes a stock character, one with whom he has tinkered on SNL, and smartly roughens out the edges. The quips and sarcasm remain, but the pain underneath is thoroughly and courageously explored. Carrying a major motion picture for the first time, Davidson commands the screen, inviting the audience into Scotty's chaos. His character doesn't just drift through life aimlessly (Davidson recognizes that would make a dull protagonist for a 2+ hour film), but instead has a death wish (In the opening scene, he has an anxiety attack that almost leaves him, and several others, dead). Without including grandstanding scenes of rage, Davidson allows Scott to bubble up inside, only to explode ineptly, in several very funny fight scenes.

The humor is more character-based than punchlines, which gives the film depth and keeps it from coming off like a sitcom. As in all Apatow films, The King of Staten Island is brimming with quirky characters and off-beat situations, like an after-hour fight club in a family restaurant, a portfolio of tattoos gone awry, and sardonic female insights on The Purge series.

Each actor makes an impact, no matter how small the role. There are no angels or devils in Davidson and Apatow's script and the actors take advantage of those nuances to show the ugly side of decent people, revealing the internal damages that cause them to act inappropriately. Davidson exudes confidence in his story and in his understanding of Scott. Marisa Tomei is winning as Scott's mother, giving her character her own growth and independence just when you think her lovelorn character would blow wherever the wind would take her. As Scott's gang of reject thieves, Lou Wilson, Ricky Velez and Moises Arias are hilariously hapless and inept, but bond as a group that would never sell each other out. Burr is hard-edged as Ray, Tomei's suitor, manipulative and incompetent, but capable of tenderness. Burr cares about his character and makes sure that Ray's intentions are loftier than his execution. As a fireman from Ray's house, Steve Buscemi quietly steals the film as a wise mentor both to Scott and Ray.

Unexpectedly funny and kindhearted, The King of Staten Island fleshes out Pete Davidson's talents and proves that his insight and compassion is a perfect antidote for these disjoined times.