NOTE: This article features minimal spoilers but does give away concepts that have been revealed in the trailer and in the press. However, though nothing specific is revealed, you may want to wait until you've seen the film before reading if you want to live spoiler-free. 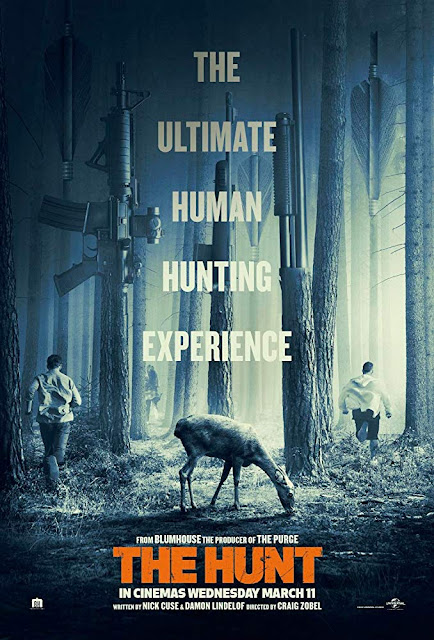 The notorious film The Hunt has finally opened – and is now available to stream -- after a seven-month postponement when two tragic shootings haunted the original August release date. Universal Studios is selling the controversy now as it releases this month on Friday the 13th , utilizing some of the tactics '80s grindhouse producers had used to sell films like Snuff. The poster for The Hunt itself displays quotes from major publications like Time and Wall Street Journal claiming that the film is a heinous powder keg ready to destroy an already divided nation. But in reality, there are two vastly different Hunts in play.  The first is a pitch-perfect black comedy with hilariously grotesque performances, and the second a watered-down social satire that misses the mark by several miles.

Following the framework of the classic thriller, The Most Dangerous Game, The Hunt begins when a slew of strangers awakes in an unknown field with bit gags locked around their mouths. They gather around a box loaded with ammunition, and before they can catch their breath, unknown shooters begin attacking them.  They race for cover and find themselves chased by a well-funded group of mercenaries. However, those guerillas made one fatal flaw. A case of mistaken identity may ruin their entire deadly scheme. 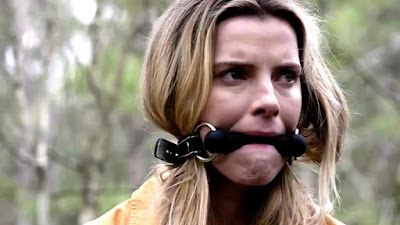 Taking The Hunt at face value, without the – you can't even call it subtext since it's all so abrasively obvious, but more on that later – commentary, it's a wicked comedy. The grue factor out-does Tarantino with such cartoon violence, the audience can only laugh at the absurdity. As a protagonist, Betty Gilpin (G.L.O.W) is an heir to the Uma Thurman school of ass kicking. She's resourceful, self-effacing, and able to utilize any object as a deadly weapon. As the Bond-esque villain, Hillary Swank -- who for half of the film is only shown from behind, as if like Medusa she would turn the audience to stone with one glance -- offers a gloriously insane performance, even if all her dialogue is gibberish. She knows her script is deteriorating in her hands, so she goes for broke. Several familiar actors: Emma Roberts (American Horror Story), Ike Barinholtz (The Mindy Project), multi Oscar-nominee Amy Madigan (Field of Dreams), Tony-winner Reed Birney (House of Cards), It's Always Sunny In Philadelphia co-creator Glenn Howerton, and TV heartthrob Justin Hartley (This Is Us) know exactly what kind of schlock they're in, and their high-wire energy is addictive. Writers Nick Cuse and Damon Lindelof (Producers of Watchmen amongst other TV juggernauts) have their tongue so firmly in their cheek, it almost drills out. They pull a triple Janet Leigh so that from the very start the audience has lost any sense of equilibrium. All the rules that keep audiences safe have been demolished. Director Craig Zobel (if you haven't seen his horrifyingly claustrophobic Compliance, you must) keeps the suspense high, while also reminding the audience he is pacing a comedy. The bombastic score and flippant dialogue is never meant to be taken seriously.

Now for the satire, which doesn't work for different reasons and will offend pretty much every viewpoint.  The story of rich hunters going after destitutes has been utilized for eons and always evokes a Luis Buñuel edict that the rich will always eat the poor. Here the victims are not just lower class, they are red hat wearing, proud Trump fans and internet trolls, who protest LGBT rights, shoot animals for sport, and spread conspiracy theories.  The villains are elite liberals. And here's where the problem lies. Satire is meant to shine a light on the viewer to mock their pride and their convictions. However, if the film wants to reveal that even politically correct liberals have rage in their heart during this contentious time in history, the characters portrayed on screen are not really the audience. They're spoiled, over-paid, over-indulgent stock characters of the wealthy. A savvier film would have made the antagonists everymen/women so that we as a liberal audience could recognize our own foibles. The extreme wealthy, though liberal as their money/donations may claim, are not representatives of the liberal contingency. Let's not forget, one of the most vocal liberals, one who gave great sums to political animals, is current Rikers Island inmate Harvey Weinstein. Because the writers draw such jagged strokes in painting their villains, the satire well runs dry immediately. Rod Serling would never have gone to such extremes when he made his points on The Twilight Zone. He wanted the audience to recognize themselves in the befuddled protagonists, to learn about their own inherent racism, phobias, and hidden hatreds. He would have understood that subtlety is required to achieve that balance. The Hunt has all the subtlety of a runaway tank barreling towards a children's picnic.

If one can accept the schizophrenia of The Hunt and ignore the disjointed commentary, the film is a fun, wacky, well-crafted Grand Guignol with a crackerjack cast.