Aboard the Searcher, Buck (Gil Gerard) is exhausted, having worked for two days straight. However, when a derelict is discovered in Sector 5, drifting into the shipping lanes, he is awakened by Crichton and called upon to investigate.

Buck, Crichton and Hawk (Thom Christopher) discovers that the ancient ship is manned by seven diminutive Zirdonians, and is carrying as Caro several solar bombs. Worse, the solar bombs are degraded, and could poison this area of space for generations to come.

The troublesome Zirdonians return to the Searcher with Buck, as the ship tows the freighter to a star where the dangerous solar bombs can be dumped.  The Zirdonians -- who have never seen a human female before -- terrorize Wilma (Erin Gray), and also cause an accident with the Searcher's plasma drive. Crichton is badly injured in the accident, requiring repairs to his positron brain that only Twiki can assist with.  When the surgery threatens to go awry, the pesky Zirdonians attempt to help using their remarkable telepathic powers. 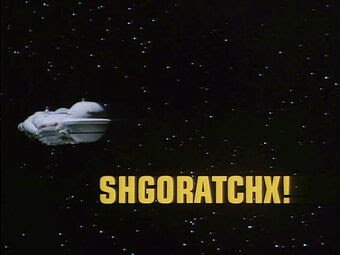 "Shgoratchx!" is the worst episode of the entire Buck Rogers catalog. It is sexist, and flat-out stupid.  The episode is a fifty-minute insult to the intelligence.  This episode, much like "The Golden Man," is one that I have not watched since the original airdate in 1981, nearly forty years ago.   Now I remember why I have avoided it like the plague.

Revisiting "Shgoratchx!" in 2020 was not pleasant.  I tried to explain it to my son as we began to watch "A group of little people, dressed like 18th century French generals, who have never seen a woman before, try to use their mental powers to see Wilma's bumps."

And, sadly that description is pretty accurate. 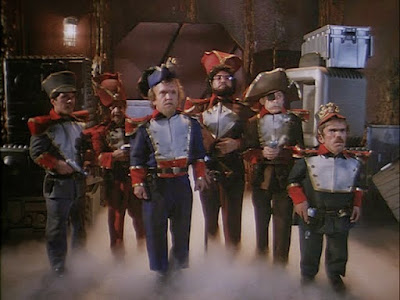 Where can you begin with this one?  The episode treats Wilma in an absolutely offensive way. She is a Colonel in the military who has won space battles, battled deadly cult leaders, and rescued Buck's life on numerous occasions.

But here, this dignified and experienced officer is subjected to repeated exposure to the "handsy" dwarves who wish only to disrobe her...so as to peek at her breasts.  I don't know what's worse, that Wilma doesn't just take these guys out herself with a well-placed laser blast, or that Buck treats the situation as if it were humorous. When Buck was treated as a sex object in the first season episode "Planet of the Amazon Women," he did not find it so amusing in the slightest.

Similarly, why would Admiral Asimov (Jay Garner) order Wilma to be the escort for these perverts around the ship after witnessing, on the Searcher bridge, how they treat her?  The whole situation is meant to be funny, but by today's standards -- or even standards of the 1950's -- this is just horribly wrong, and horribly unfunny. 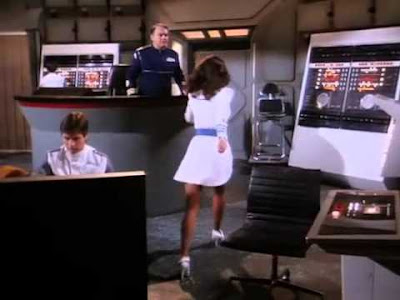 Then again, what can one reasonably expect from a teleplay that lists one of the great catastrophes of the 20th century as "Women's Lib," and puts that beside the Holocaust for comparison?  Yes, because fighting for equal rights for women is an atrocity on the same level as destroying all human life in a planet-ending war.

Once the viewer ties that remark about equal rights for women to Wilma's treatment in the episode, one senses why this episode of Buck Rogers plays more like it is set 500 years in the past than 500 years in the future. The mind-set behind this episode is, decidedly, Neanderthal.  I can imagine the pitch meeting.  Wouldn't it be cool if some aliens with telepathic powers started to unbutton Wilma's blouse with their minds, and she couldn't fight back?

The episode is a disaster for other reasons.

The Zirdonians all possess, basically, endless mental abilities. They are immune to electric shocks. They can, by telekineses, conduct repairs of positronic brains, and remove blouses,

So, given such expansive mental abilities, why don't they simply repair their own ship, and the leaking Solar Bombs themselves?

If they had done that, of course, we would have all been spared this horrendous, backwards hour of television.

Once again, the Searcher seems to be the worst run ship in the galaxy again traveling, unprotected through an asteroid belt, and taking heavy damage. It seems as though so many of these second season stories depend on the Searcher being immobilized during a crisis.  Here, it gets trapped on a collision course with a sun, and desperately needs repairs. Unlike the Enterprise, or even Moonbase Alpha, however, the Searcher seems to possess no damage control or repair teams. Rather, Dr. Goodfellow, an elderly man, is tasked with repairing the ships systems by himself.  How much sense does that arrangement make?  The only person who can repair the ship is approximately 80 years old?  What if two systems break down at the same time?

The second season of Buck Rogers really could have worked well, even with its revamped premise.  "The Guardians," "Time of the Hawk," and "The Satyr" and others are respectable sci-fi dramas in the pattern of a Star Trek or a Space:1999.  But "Shgoratchx!" is an unmitigated disaster.

When people complain about the second season of Buck Rogers in the 25th Century, this is no doubt the story they are thinking of.

"Shgoratchx!" isn't the expletive I would use but it gets close to describing the quality of this episode. "Shit" comes closer to the mark.