Now here is a weird film collectible from the disco decade.  In 1975, Universal Studios -- at the height of the disaster film craze that gave rise to The Poseidon Adventure (1972), Earthquake (1974) and others -- released The Hindenburg. The film was directed by Robert Wise and starred George C. Scott.

The movie recreated the time-period leading up to the 1937 disaster, and, at first blush, wouldn't seem the ideal movie candidate for merchandising efforts.

Yet, the ironically named "Good Time Jewelry, Ltd.," out of Rochelle Park was licensed by Universal to create a series of "Hindelry keepsake medallions" based on the film and the tragic historical events it depicted. 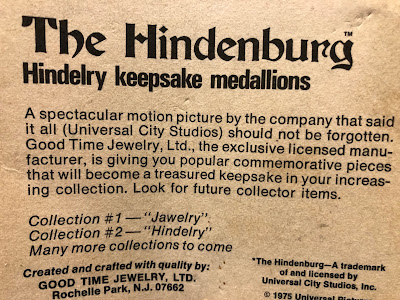 On the card for the Hindenburg medallion, it was written: "the sensation of a lifetime that turned into one of the century's most remembered incidents." Weirder yet is the transposition of the art with the company's name. There are images of people running in terror from the exploding dirigible, while underneath them is the name "Good Time."

Apparently -- and I would love to see this -- there was also "Jawelry" released by the same company, based on Universal's Jaws, from the same year.
at February 11, 2020