When the Searcher loses all engine power and requires new thurbidium crystals to restore power, Buck (Gil Gerard), Wilma (Erin Gray) and Hawk (Thom Christopher) explore the volcanic planet Phibocetes to collect them.  The world is believed to be much like Earth was before animal life developed there, and thought to be uninhabited.

However, the trio soon finds a strange mummified humanoid near the lava pools and brings it back to the shuttle for further examination. The mummy soon takes the crystals they have mined, and disappears.

On the Searcher, Crichton searches the archives and learns that a human colony left Earth and settled on Phibocetes some four hundred years ago. They also seem to have suffered from a strange lifecycle which saw the normal humans devolve into strange mummy creatures. All contact with the colony was lost three hundred years ago. 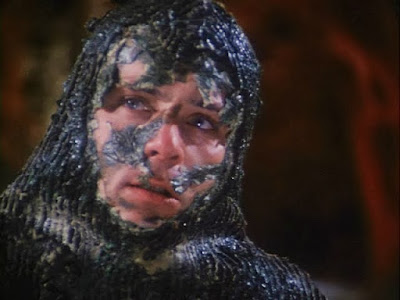 Meanwhile, n the planet, Buck befriends a young humanoid woman, whom he names Laura (Amanda Wyss). She has no memory of her past, and fears that she too, will devolve into a hideous monster. Buck tries to help Laura resolve her amnesia, without success.

As Buck and the other struggle to get the crystals to the Searcher, Crichton reports that he has made a mistake. He had the information from the archive backwards. The creatures on the planet actually evolve from mummy to humanoid, part of a deliberate, genetically-engineered life-cycle that would speed up colonization and remove such pesky human difficulties as pregnancy, infancy and childhod.  Now, Laura realizes she is kin with the mummy, and the he will soon be a fully-developed human male. 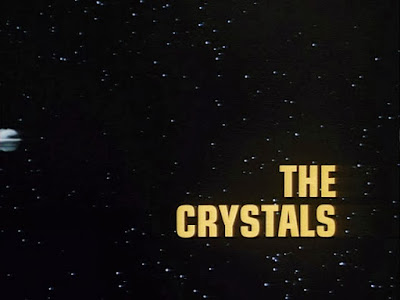 "The Crystals" is another decidedly mediocre second season entry of Buck Rogers in the 25th Century (1979-1981). It's not one of the worst episodes by any means (see: "Shgoratchx!") but nor does it rank with "The Guardians" or "The Satyr" as one of the best.

It seems like the makers of the series were obsessed, at this point, with life-cycles moving in reverse. In the previous episode, "The Golden Man," Buck and the Searcher crew met aliens who aged backwards, from physical adults to children.  In "The Crystals," they meet beings who they believe, at least at first, devolve from human to Mummy.

Alas, the actual Mummy costume featured in the episode is ill-fitting and very fake-looking, down to the rubber zipper on the back. Adding further cheapness to the endeavor, the video imagery of the Mummy's blood is actually stock footage of the microscopic alien "bug" from The Andromeda Strain (1972). 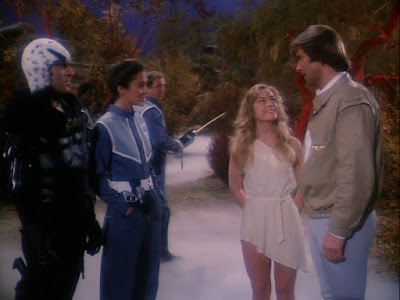 "The Crystals" also adds to the perception that the Searcher is the worst run ship in the galaxy. In "The Golden Man," the ship runs aground on an asteroid in a magnetic storm. Here, the ship's engines go dead as it runs of its needed power crystals.  Does the ship not have a re-supply schedule, or an itinerary to visit star bases or planets with the materials they need? It seems awfully inefficient that the ship should have to depend on (hopefully) finding an Earth-like planet somewhere nearby in space, and then mining crystals they find there.

Also, the ending of "The Crystals" didn't entirely cohere. The teleplay establishes that the crystals are needed on the planet to activate the life forces of Laura's people. That is why the mummy kept stealing them. The crystals required to spur the evolution process.  But the episode ends with Buck and his team packing up the crystals to take back to the Searcher.  Won't that prevent Laura's people from evolving?

I do like the idea of the Searcher's archives being highly imperfect, however. The Buck Rogers chronology has the Holocaust occurring in the 1980's, shortly after Buck left Earth on his ill-fated mission. One group of humans apparently remained on the planet, and tried to rebuild following the nuclear war.  These people became the founders of the Directorate.

But there was another branch of humanity, apparently, that left injured Mother Earth, the so-called "lost tribes" that went out into space to settle other worlds.  The colony featured in this story would be one example. I always wished that the series spent a little more time explaining this second branch of humanity, especially since it isn't clear how the humans who had Earth had the technology to explore distant worlds, in distant solar systems.

Again, "The Crystals" isn't terrible, it just isn't great.  It feels like a story that might have just barely passed muster on an average week of Star Trek, or Space:1999.