Buck Rogers in the 25th Century: "Flight of the War Witch" (Parts I and II)

In "Flight of the War Witch," a mysterious gold orb heads to Earth, a so-called "riddle wrapped in an enigma," and Buck (Gil Gerard) is tasked with learning more about it. The orb presents Buck and Earth with a microchip that confirms "The Vortex Theory," the idea that a black hole is actually a portal from one universe to another.

Buck's starfighter is outfitted to survive the turbulence of the black hole, using the information from the orb, and he travels to a new universe, and the planet Pendar.  There, before the Council of Pendar, he learns that the pacifist creatures of that world are under threat from the Zaad War Witch, Zarina (Julie Newmar). Soon, she will  learn a way through their planetary defense shield and conquer the planet.  The people of Pendar need Buck to fight a war for them and stop this invasion.

Meanwhile, Princess Ardala (Pamela Hensley) has captured Dr. Huer (Tim O'Connor) and Wilma Deering (Erin Gray), and she orders her newly uplifted Draconian flagship through the black hole.  Now, an uneasy alliance forms between the Directorate and the Draconians, in this new universe, to help bring down the tyrannical Zarina before Pendar is lost. 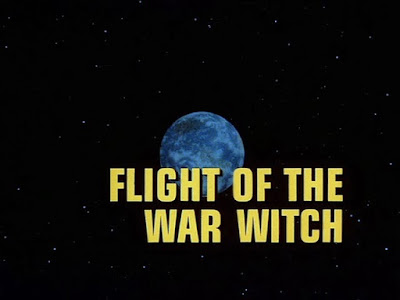 The last, two-part episode of Buck Rogers' first season is a perfect display of all that is right, and all that is wrong with this catalog of episodes.  Namely, the episode features an interesting premise and some good character moment, but then falls back into a formulaic rut.

On the positive side, the episode begins with a tantalizing mystery.

The gold orb from another universe arrives on Earth (at Vasquez Rocks, to be precise), and nobody knows if it is a weapon, or a message of peace. It is fascinating to watch Buck and his friends navigate a "first contact" type of situation, instead of bringing down alien gangsters or despots.  But, before long, the alien orb's message is deciphered, and lo and behold, it involves bringing down an alien despot, Zarina.

All the tantalizing, mysterious trapping of the episode's first twenty minutes, then, lead into an episode that feels very familiar.  "Buck's Duel to the Death," dealt with a similar premise: oppressed, peaceful individuals who need Buck to fight their battle for them.  It is a true shame to open up the idea of another universe, and then tell the exact same story we have already seen in Buck's universe.  That's a failure of creativity on a colossal scale. 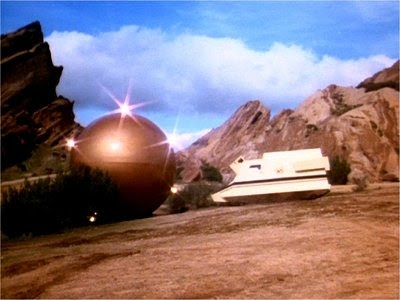 Once Buck gets to Pendar, and is forced to fight a war for the aliens there, the series is back on worn territory, and flies on automatic pilot, for the most part, with captures, escapes, and space dogfights.  Maybe there truly is nothing new under the sun.  Still, I credit the episode's special effects ambition. This two-parter features at least two new miniatures, the shark fighters of Zarina, and her massive (and impressive) warship.

Indeed, there are elements of interest throughout the (overlong) two-hour installment.  I have always enjoyed and appreciated Wilma's emotional farewell to Buck in this episode before he goes into the black hole.  She tells him "I didn't think I was going to like you when I first met you."  That is probably an understatement, given their tumultuous first meeting, but it's a nice callback to their history together, and a good capper for the first season. Buck and Wilma have come to rely and care for each other over the first season, and even though this two-parter is devoted to spectacle, it stops to take stock of their connection, and their history.  Also, it is great that someone actually acknowledges in-universe that Buck can be an insufferable prick at times.  Usually, everyone is falling all over him as a God on Earth, with his ability to dogfight, and his charm.  Truth is, he can be a real jerk. 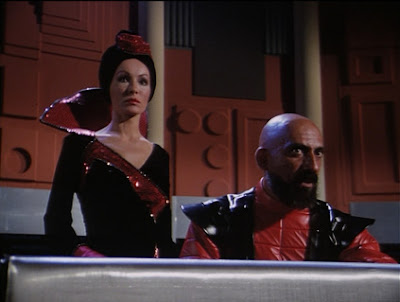 Also, "Flight of the War Witch" brings to an end the season-long subplot about hostilities between Earth and the Draconians. In previous episodes such as "Escape from Wedded Bliss" and "Ardala Returns," the Draconians have still attempted to conquer Earth through violent means. Here, however, the longtime enemies form a truce, and work well together.

By the end, one can see grudging respect between Kane (Michael Ansara) and Dr. Huer. And, of course, Buck and Ardala come to some understanding here, as well, about the nature of their relationship.  The episode uses Ardala, at times, for comic-relief, but this approach is infinitely preferable to her throwing temper tantrums because she can't bed/marry/seduce Buck.  Instead, we also get to see Ardala as a stubborn leader here, forcing a parlay with Zarina, which goes awry.  Still, it's nice to see her acting as a head of state, or representative of state, and not merely lusting for the "genetically perfect" human male of her dreams.

"Flight of the War Witch" raises some questions that don't exactly go answered. For instance, why do non-corporeal aliens, such as those inhabiting Pendar, bother to fall in love and develop monogamous relationships like those seen here?  If they don't have bodies, what's the point?  Indeed, what's the worry about Zarina claiming the planet, given their incorporeality?  It's not like she can physically enslave them, since they have no physicality at all.  And really, if they are incorporeal, couldn't they live in space, or on another planet (even one without an atmosphere). It they don't have bodies, they don't need to breathe.  And if they don't need to breathe, they don't need an atmosphere. This is one touch in the story that makes no sense.  The idea of Pendarians as incorporeal should have been omitted.

Secondly, what's with the weird planetary defense shield holding giant space lizards and other creatures captive in it?  I admit, I was torn on this one.  The idea of a force field holding an alien space menagerie is an appealing, pulpy touch, that seems perfect for a property like Buck Rogers.  On the other hand, I had to wonder about the aliens trapped within. Who are they? How do they breathe in space?  Again, this is an idea that doesn't bear very close examination.

With "Flight of the War Witch" complete, and some ideas of season one wrapped up, namely the conflict between Earth and Draconia, Buck Rogers was free to head off in a new direction in its second season.

And a new direction it headed, indeed.  Next week: "Time of the Hawk."