Another TV series that arose in this era was a spin-off from the Nightmare on Elm Street movie franchise.  In 1988, New Line -- “The House that Freddy Built” -- produced two-seasons of a low-budget horror anthology fronted by none other than Freddy Krueger himself. 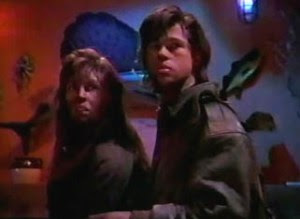 On paper, it certainly looked promising, and the series aired in 106 local markets. But the series experienced some growing pains over its first season. 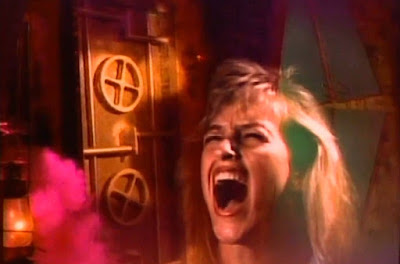 Freddy’s Nightmares’ changing cast of young actors looked inexperienced and diffident, the budget was so low that no good locations could be used (and one episode appears to have been shot in a hotel meeting room…), and the program was shot, badly, on ugly videotape.  The writing seemed rushed too, and lacked nuance.  The series had a lot of gore and a lot of sex in it, but very little in terms of ideas.

And Freddy -- who has continuing a long decline from being terrifying boogeyman to ringleader of a three ring circus – wasn’t well-served by the anthology, either.  He became overly-familiar, and familiarity is the enemy of good horror.

The pilot episode of the series, “No More Mr. Nice Guy” exemplifies the two-dimensional approach to Freddy’s world.

Here, Freddy is portrayed not as a man who hides in shadows and hurts in children in dark corners, out of society’s view, but as Evil Incarnate. 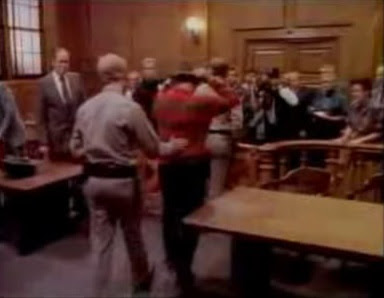 In other words, before his burning and resurrection as a spectral monster, Freddy is already monster, a fearsome immortal not afraid of anyone or anything.  As he is burned alive, Krueger quips” You missed a spot” and makes other ludicrous remarks that suggest he is not afraid of death, and in fact, mocking of those who kill him.

Although we know from the feature films that Don Thompson (John Saxon) captured Freddy (and ultimately had to release him), neither Saxon nor the character appear in this episode. Instead, Lt. Blocker (Ian Patrick Williams) is the arresting officer.

That’s a change in continuity.

As is the fact that several police officers speak openly of Freddy’s final resting place, even though in Dream Warriors, Thompson is the only person who possesses the knowledge that Freddy’s bones rest (though not in peace…) in an auto junkyard.

Worse than any of this, Freddy’s Nightmares is a disaster from a visual standpoint.  Freddy’s house is supposed to look menacing, but looks more like a red-and-green disco where someone’s smoke machine has malfunctioned. Another cost-saving measure: the two-half hour stories in each program often use the same two sets. 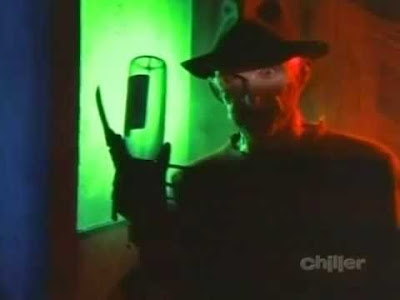 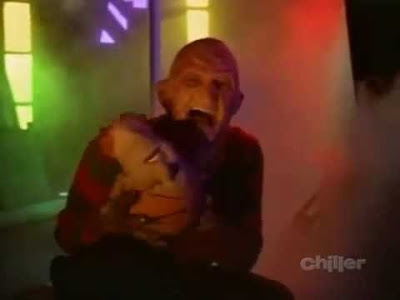 One of the key reasons why the Elm Street films proved so popular in the late 1980's involved the dazzling fusion of inventive dream ideas with amazing special effects.  Freddy’s dream world was always imagined with fantastic results in even the worst of the feature films.  The TV series completely betrays that legacy, and looks like an amateur production by comparison.

I wrote in Terror Television (1999) that Freddy’s Nightmares is my choice for the all-time worst horror TV series, and I stand by that assessment. The series had a duty to respect the King of Horror, Freddy Krueger, and it completely failed him (and Englund) at every turn.  I have never believed it was a coincidence that the movie series began to fare poorly at the box office starting in 1989…the era that Freddy’s Nightmares aired. I think the dumb, cheaply-produced syndicated series killed a lot of good will towards the gloved one.

Still, I’m a completist, and thirty years after it aired, I’d be very happy for an official DVD release of the series, and the opportunity to re-evaluate its merits.
at August 14, 2019