A young man from the 20th century, Hieronymous Fox (Gary Coleman) now serves as the President of the planet Genesia, where he utilizes his genius to help the planet develop. A notorious gangster, Roderick Zale (Ray Walston), however, captures the boy and takes him to Aldebaron 2, where he is held for ransom.

Fox's bodyguard, Did Cyrton (Melody Rogers) abducts Buck (Gil Gerard), who is about to go on two weeks of vacation, to help recover the boy, Genesia's "technological miracle worker." At first Buck doesn't want to help, until he learns that Hieronymous is from the 20th century, just as he is.

Buck, Cyrton and Wilma (Erin Gray) head to Aldebaron II, the "Barbary Coast of Space" and must deal with a telephonic information broker (Earl Boen) and a deadly assassin from a heavy gravity planet, if they hope to save the president from Roderick Zale. 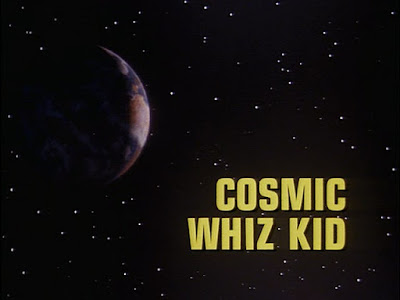 However -- give the devil his due -- "Cosmic Whiz Kid" is actually a pretty fun episode of Buck Rogers, and Coleman is a welcome and leavening presence, showcasing some of the lightness and joie de vivre that the more dour Gerard seems reluctant to showcase on a weekly basis. Coleman's Hieronymous Fox proves to be resourceful, funny, and talented at both getting into scrapes and getting out of them. He also makes, likely, the best foil for Twiki, seen on the series.

Beyond the presence of Coleman, the episode is delightful in large part due to Wilma's subplot. She goes undercover to work in a communications center on Aldebaron 2, and is saddled with an obnoxious, robot servant who looks down his mechanical nose at all organic life-forms. The robot is nasty and condescending to her, and there's nothing Wilma can do about it. Gray's reactions to the robotic put-downs are well-played, and again, a lot of fun. 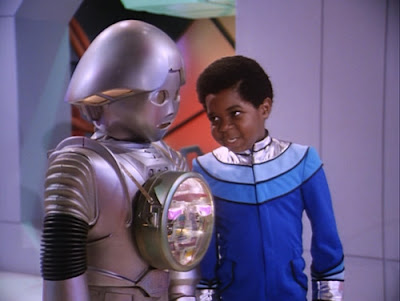 The episode also continues the leitmotif of season one Buck Rogers, creating a cosmic "underworld" of thugs and characters that take our earthbound "criminal" world to a galaxy of new possibilities. Earl Boen plays the telepathic "information broker" who must be near his marks to read their minds. The character can read minds, and therefore he also finish the sentences for people he is talking with...an annoying (but memorable) habit.

Also, the heavy gravity assassin, Toman (Lester Fletcher) is a fascinating a character, a weakling on his own world, but a physical powerhouse on worlds with different gravity, like Aldebaron, or Earth. Now, these aren't deep touches, but they are inventive ones.

On the 25th century tech side of the issue, the episode shows us security fences made of forcefields, and, on Wilma's job at the comm station, the support that goes into comfortable living in this particular future.  We see house-keeping robots, and more.

Again, it's not that this material it is particularly powerful or thoughtful in terms of science fiction, just that the episode is a lot of fun, and often clever in its depiction of Buck's world. 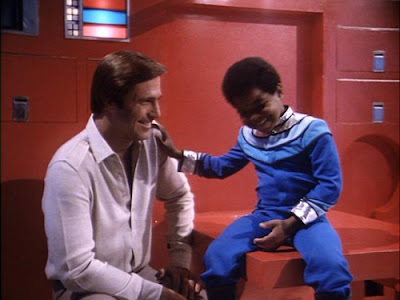 Ray Walston is another great presence in the episode, shading the two-dimensional villain, Roderick Zale, with human, recognizable qualities like irritation, bemusement, and arrogance. He comes across as dangerous, but also relatable. He is less cartoony than many of the villains featured on the series. 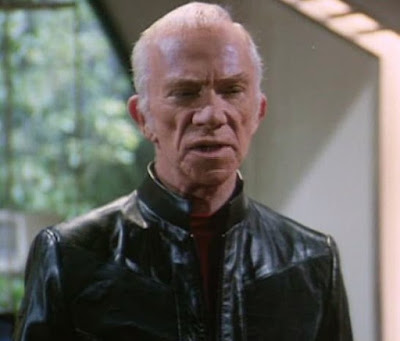 Taken all together, "Cosmic Whiz Kid" is a marked improvement from some of the previous installments, despite the fact that the producers felt it necessary to add a sitcom star to make the world of Buck Rogers more appealing, and more popular.

Next week, Princess Ardala returns in "Escape from Wedded Bliss."
at August 08, 2019