In “Escape from Wedded Bliss,” Princess Ardala (Pamela Hensley), Kane (Michael Ansara) and the Draconians return to Earth armed with a fearsome new weapon: an orbiting, glowing pyramid that can destroy whole cities in a heartbeat. The Draconians stole “ultimate weapon” from an alien mining operation and converted it for purposes of mass destruction.
Now, Princess Ardala ransoms Earth, and the Defense Directorate. She wants to marry the most “genetically sound” man in the universe, Buck Rogers (Gil Gerard), and will destroy New Chicago if he is not sent to her for what Buck terms a “shotgun” wedding.
With the aid of a Draconian defector, Buck gathers intelligence about the Draconia’s lay-out and acquiesces to Ardala’s request. Once aboard her flagship, he must battle Tigerman to the death to prove his worth to marry a Draconian princess. He refuses to kill the hulking bodyguard, however, after defeating him in the arena.
Buck’s real mission, however, is to disarm and destroy the pyramid weapon. He must do so before the marriage ceremony. There, at the wedding, he will be outfitted with a special, constricting collar that will assure his fidelity to Ardala for the duration of their marriage. 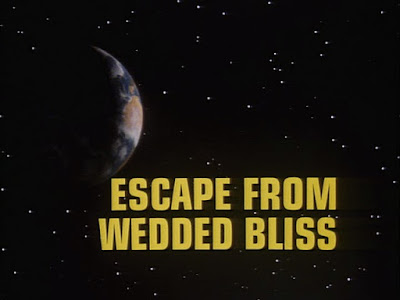 When I was ten years old, and first watched “Escape from Wedded Bliss,” it was probably my favorite episode thus far of Buck Rogers in the 25thCentury. It’s easy to see why I felt that way as a kid.  First, it brought back the Draconians, and sexy Princess Ardala, the distinctive and colorful villains from the feature film. Secondly, it presented a visually memorable, and highly destructive weapon of mass destruction as the episode’s McGuffin.
As an adult watching the episode some forty years later, however, “Escape from Wedded Bliss” loses much of its luster.
Of course, it is always great to see the return of Pamela Hensley, and also terrific to see Ansara join the series, replacing Henry Silva. These accomplished performers and their characters will return two more times, beyond this episode, in the remainder of the first season (“Ardala Returns,” and “Flight of the War Witch.”)
But the story itself in “Escape from Wedded Bliss,” and well as its execution, leave much to be desired.  The first problem, of course, is the whole narrative set-up. Princess Ardala travels half-the-galaxy, carrying a weapon that could conquer any planet, any race…just to marry Buck Rogers?  After he tranquilized her, destroyed her fleet, and sent her scurrying back to Daddy in “Awakening?”
And why is Buck even in the running as the “most physically and genetically sound” man in the galaxy? I mean, Buck is handsome and good looking, sure, but physically and genetically remarkable? The episode offers no specifics about this claim on the part of the princess. It likely would have been better if Ardala simply stated that she found Buck to be the most desirable of all her suitors, and therefore would stop at nothing to marry him. But Buck definitely has this tiresome, 007 thing going on in the first season, where every woman he encounters basically drops to her knees in his presence, judging him to be the hottest guy in the known universe (or even other universes, as the case may be.)
But -- as Kane sort of points out -- Ardala’s plan is pretty lame. She could bring the Earth Defense Directorate to its knees with the pyramid weapon, taking out defense installations and Starfighter squadrons to start.  She could then subjugate the planet and, finally, from that position of authority and strength, demand Buck Rogers as one of the terms of the planet’s surrender. 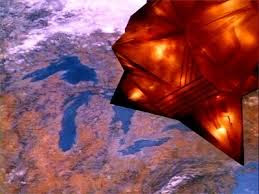 This tactic would not only get her the man she so abundantly desires, but prove to Draco that she is the ruler/leader he wants and needs to succeed him on the throne  But of course, Ardala manages not to go this route.  Perhaps it is because she possesses some small hope that Buck actually loves her, and that if she were to attack Earth, he would never marry her willingly. Still, her plan is really bad, and doesn’t stand up to scrutiny.
“Escape from Wedded Bliss” also features a scene that will live in infamy, at least in cult-television circles. At the reception for Princess Ardala in New Chicago, the Earth Directorate Defense provides some live entertainment. That entertainment turns out to be a troupe of scantily clad, male and female roller skaters.  The roller skaters engage in a terribly dated, horrifically embarrassing number to quasi-futuristic music that stops the episode in its tracks.
To paraphrase a review from the series I once read, if this is the entertainment of the future, count me out.
Also, there’s some weak writing here, as Buck manages to get out of all his scrapes, including the dangerous wedding ceremony, using a “black light” bomb, given to him by Dr. Huer. Basically, Rogers just has to pitch the bomb on the ground, and the whole screen goes black.  When the screen returns to normal, Buck is gone, having escaped. 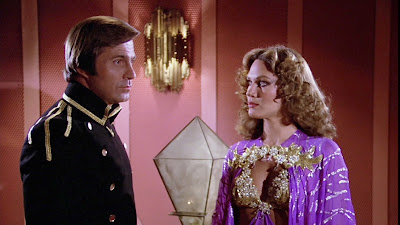 In the audience, we don’t see him flee, or get past the guards, or find his way. The screen just goes black and we cut to Buck’s new location as he is miraculously out of danger. I would like to ask the question: why is Buck immune to the effects of the black light bomb? Why can he see, after detonating the bomb, well enough to escape and get where he’s headed  If the bomb lays down an impenetrable veil of blackness how does Buck see through it?
Then, of course, the episode must feature a standard duel between Buck and Tigerman (think “Amok Time,” or “Rules of Luton,” or “Code of Honor,” or…), one that requires Buck to showcase his moral, human superiority by not killing his opponent. This decision proves helpful, as Tigerman helps Buck escape the princess’s clutches in the final act.
But does anyone really believe that Ardala wouldn’t immediately have Tigerman put to death, following, his defense of Buck? Tigerman strangles the Princess and threatens to kill her, while Buck escapes. Why does Ardala tolerate his presence after that?  Good help isn’t that hard to find.
A commenter here a few weeks ago wrote, based on my review of “Vegas in Space,” that it sounds as though that episode didn’t stand up to much scrutiny. The same observation holds for “Escape from Wedded Bliss.” It’s a silly, inconsequential hour, despite the return of the delightful, Hensley.  I guess all I can say is that it is a fun show, and Buck’s main claim to fame is, finally, its reputation as a fun space romp.  At its best (“Plot to Kill a City”), the series could shatter that ceiling, but “Escape from Wedded Bliss” is more representative of the first season, as a whole. It’s a fun and silly adventure, and that’s it.
Next week. More “genetically perfect” people in “Cruise Ship to the Stars.”