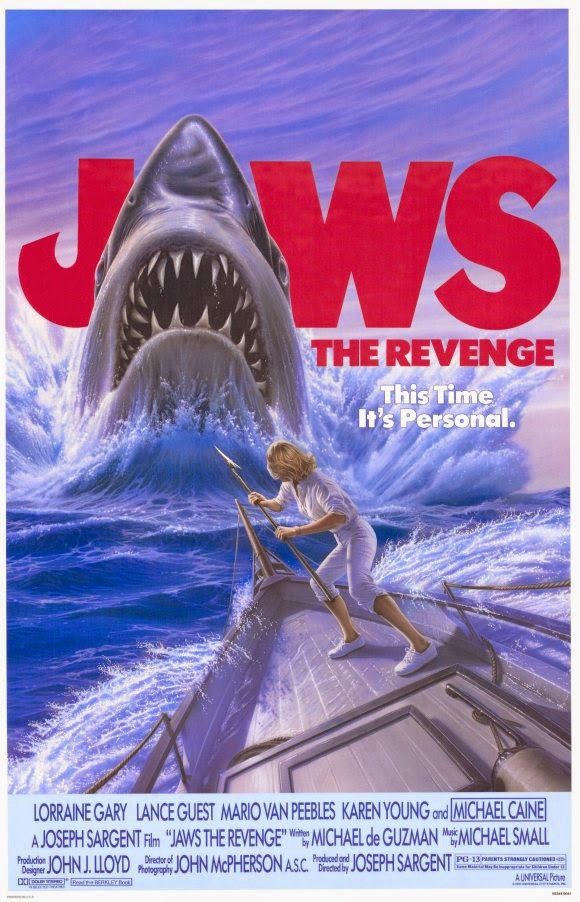 During a funeral for a shark victim in Jaws: The Revenge (1987), a character notes that “to everything, there is a season.”

That observation also applies, alas, to the later sequels to Steven Spielberg’s Jaws (1975). By the time of this final, gloriously awful sequel to the first film, the franchise had long endured past its season, and freshness date too.

Ironically, at some level, the filmmakers seem to understand this fact.

Either that, are they are spectacularly unaware of the dialogue being spoken in their own film, and just plain hapless. Early on, for instance, a pilot named Hoagie (Michael Caine), asks Mrs. Ellen Brody (Lorraine Gary) if she has ever been to the Bahamas.  She answers that she has not.

At which point Hoagie says the following: “The first time’s the best for everything.  After that, you know too much, and nothing’s quite the same.”

He’s right, and he’s insightful (and he’s a really cool character, because his clothes don’t get wet even when’s submerged for minutes at a time underwater...).

As per Hoagie’s wit and wisdom, the first Jaws remains the best, and the more times we go back into the water to see Brody family fighting sharks, the less impressive the sight is.  At some point, it just gets old...and stale, and the screenwriters must use desperate tactics to maintain interest.

Jaws: The Revenge is an object-lesson in this wisdom, as it concocts an absurd, incoherent, inconsistent plot about a shark’s plan to kill the family members responsible for its own death.

My God...what did I just write?

Yes, that’s right -- per the movie’s dialogue -- “The shark [singular] that killed Martin and Sean” has returned from beyond the grave to murder the other Brodys, to avenge itself.

Technically, that makes Jaws: The Revenge a zombie shark movie.

At the very least, it’s dead in the water. 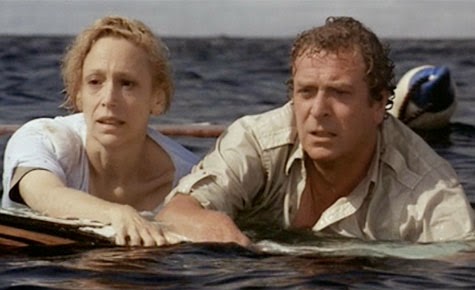 Sometime after the death of Sheriff Brody in Amity, Sean Brody has become a police deputy. Near Christmas one year, a great white shark sets a trap for him in the harbor, lodging a piece of wood near a buoy.  As Sean attempts to clear the debris, the shark strikes, and kills him.

In mourning, Ellen Brody (Gary) becomes convinced that the shark that killed both Brody (by heart attack…) and Sean is after the whole Brody family.

Accordingly, she wants her other son, Mike (Lance Guest), to quit his job as a marine biologist and stay away from the water.  Instead, Mike invites his Mother to visit his family -- his wife and daughter -- in the Bahamas, where he is working on a grant.

She agrees, and in the Bahamas romances Hoagie (Caine), a local pilot.  But before long the shark shows up, threatening Mike, and Mike’s daughter, Thea, when she rides on a banana boat.

Ellen takes to the sea alone aboard a ship, Neptune’s Folly, and decides to meet the shark on its own terms… 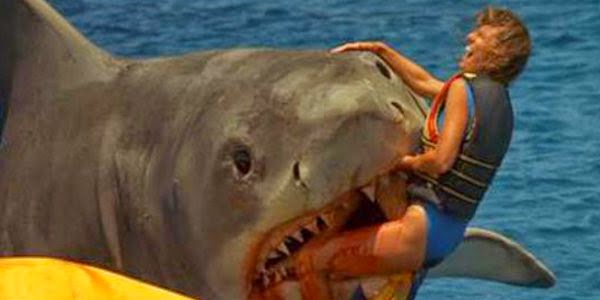 I must confess, it’s tough to know where exactly to begin with this film.

I suppose the best starting point is Ellen Brody.  She tells us herself that Martin Brody (Roy Scheider) died from a heart attack (brought on “by fear”) and yet she blames the shark explicitly for his death. I guess Martin's exercise and eating habits had nothing to do with his condition. The shark made his heart fail.

Ellen also appears to possess some kind of psychic link with the attacking shark, and knows when it is nearby, and what it wants. She possesses the certainty of the devout in “knowing” these ridiculous things, and yet the movie validates her by making everything she believes absolutely true. Yes, the shark is killing Brodys! She is right...and righteous!

The shark that killed Ellen's husband (and was killed by her husband), and that also killed her son is indeed after her family. In fact, it has traveled from Amity to the Bahamas in about a day, without benefit of airplane, and it operates, essentially, like a Brody-seeking missile, able to detect (by smell?) when a Brody is in the ocean.  Alas, the Brody-sensing, avenging-angel zombie shark has one flaw: it is clumsy. It doesn't get Thea on the banana boat. It gets her neighbor, seated directly beside her.

Missed it by that much...

In short, Ellen Brody makes a series of very dumb, even ridiculous assumptions about the shark, and the movie validates all of those assumptions. This isn’t just a shark, it’s a shark back from the dead…with a vendetta!

Ellen is special in other ways. She has the Marvel-esque ability to flashback (in sepia-tone coloring) to events that she could not possibly have witnessed. She remembers Sean’s death, though she was not in the boat with him when he died.  And she remembers Martin’s execution of the shark, though she was not aboard the Orca with him at that time.  The movie actually cuts to images of these scenes, as Ellen wages war with the zombie shark.  So she has the power to connect not just to her enemy, psychically, but to access the memory of all shark-fighting Brodys in history! 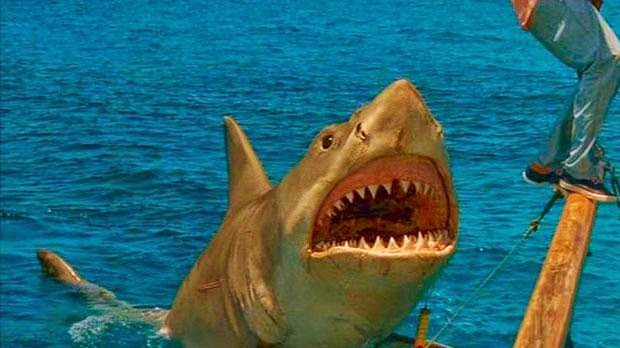 Let’s move on to the shark next.

This shark can sense people of the Brody clan, has returned from the dead, and feels anger and resentment towards those who ended its life the first time around.

My question, of course, involves shark intelligence.  Could a shark understand that it died, and came back to life?  If so, would it really devote its new life to killing off human enemies?  I mean, a shark always has to swim forward, doesn’t it?  Well, this is one shark obsessed with looking back.

This one-of-a-kind shark is -- uniquely -- able to swim the approximately 1,100 mile distance from Amity to the Bahamas in a day.  A typical shark can swim about 35 to 50 miles a day, if memory serves, so this guy is lightning fast.

And when challenged by Ellen on the open sea….the shark roars at her. You read that right, too.  It roars like a lion at its nemesis.  Maybe it is trying to prove it is king of this watery jungle.  But the problem is that sharks, unlike people, do not possess vocal cords. A shark is physically unable to roar like a lion.  But hey, this is a zombie shark, right?

Then, during the final battle, this one-of-a-kind shark jumps onto the bow of Neptune’s Folly and fatally explodes into a million pieces. There’s only one explanation: a great white shark self-destruct sequence.  If you are a zombie shark, back from the dead and seeking vengeance, it’s a given that if you fail, you have no alternative but to explode. It's a rule.

Allow me to continue this discussion regarding the behavior of other characters in the film.  Hoagie – he who does not get wet even when submerged in the ocean – flies his perfectly functioning plane into the ocean and scuttles it, so that he, and others, can swim to Ellen’s location, on Neptune’s Folly.  Does that sound smart to you? And Mario Van Peebles' character, Jake, speaks with the worst, most stereotyped Caribbean accent you've ever heard. It's a relief when the shark gets him, and a disappointment when he shows up, miraculously alive, after the final battle.

And Mike?  Well, he has a mother who can’t stop talking about the fact that a great white shark is out for revenge against his family, but when a great white shark actually shows up in the Bahamas -- for the first time in recorded history, according to Mike himself -- what does Mike do? He keeps it a secret.

Because then it has a better chance of killing his daughter on the banana boat.

Again and again, over and over, Jaws: The Revenge proves itself ape-shit crazy in terms of logic, characterization, and even the basic details of the movie's narrative.

It’s a charmless, derivative moment that adds nothing to movie.  Instead, it reminds us how good the original Jaws really was.

And what's up with the famous ad-line, "this time it's personal?"  I would wager that for every shark victim in the previous Jaws movies, the attacks were also pretty damn personal. It's not like the shark was handing out business cards and making appointments for carnage.

Jaws: The Revenge is a terrible movie, starring an extremely limited actress, Lorraine Gary, but at least it is audacious in its stupidity.  The movie is so over-the-top dumb that you can’t help but giggle your way through it.