What's the Worst that Could Happen? (First Contact Edition) 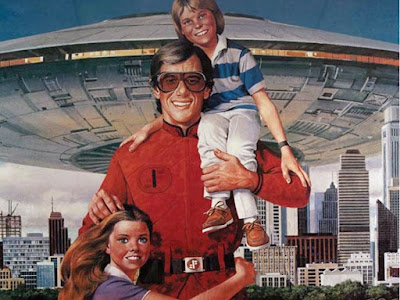 In this edition of "What's the Worst that Could Happen?" the subject is first contact; the first occasion an alien race meets the human race. The encounter can take place in space (on a ship), or on Earth.

For purposes of this list, however, encounters with one alien of a larger species will not be included. Movies such as Alien (1979), The Thing (1982) and Predator (1987) all contend with humans in out-of-the-way locations meeting a single representative of a dangerous species.

This list focuses, instead, on the disasters that invariable occur when two worlds, and two societies, collide. 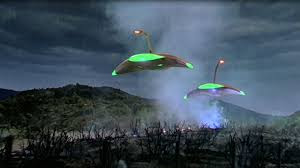 10. In 1953, aliens from Mars land on Earth, and commence the annihilation of the human race. Humanity responds with force, even deploying atomic weapons, but the manta-ray-shaped alien ships continue their conquest of our world, until humanity's society is in ruins. Fortunately, the aliens are defeated by germs. "After all that men could do had failed, the Martians were destroyed and humanity was saved by the littlest things, which God, in His wisdom, had put upon this Earth." (War of the Worlds [1953]). 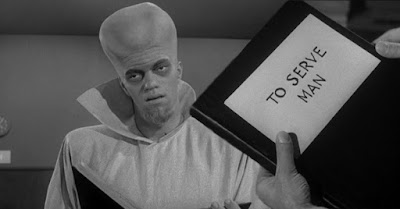 09. The alien Kanamit arrive on Earth and appear humble and friendly. Their primary textbook (the Kanamit version of our Bible, perhaps) even suggests the alien desire to work with man. That textbook is titled "To Serve Man."  Alas, it's a cookbook!  The humans boarding Kanamit spaceships to visit the alien home planet are bound, on arriving at their destination, to be served on a dinner platter. (The Twilight Zone (1959-1961): "To Serve Man.") 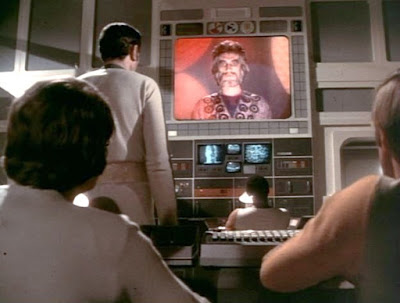 08. In 1985, Earth launches an exploratory space probe called Voyager One. This peaceful satellite is equipped with the Queller Drive, which spews fast neutrons, destroying all organic life within close range. Unfortunately, Voyager One passes within close range of the Worlds of Sidon, killing millions of people on two worlds.  Years later, after 1999, the people of Moonbase Alpha encounter the Sidons, who are seeking vengeance for the deaths of their people.  ]"Greetings from the people of Earth!" (Space:1999 [1975-1977]: "Voyager's Return.") 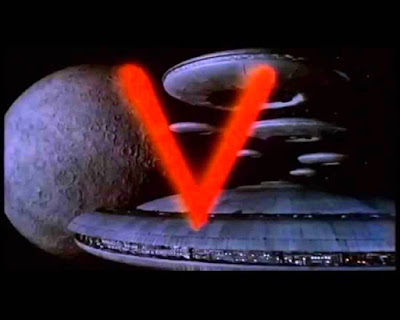 07. Fifty alien mother-ships take up positions over major cities around the world. The aliens aboard, the Visitors, promise friendship and peace. Instead, they begin turning the world against scientists, who might discover the truth about them. And what is that truth?  The Visitors are reptilian creatures here to steal our water, eat our people, and abduct humans to use as cannon fodder in their Great Leader's war against an unknown alien enemy.  "Friendship is universal!" (V [1983]). 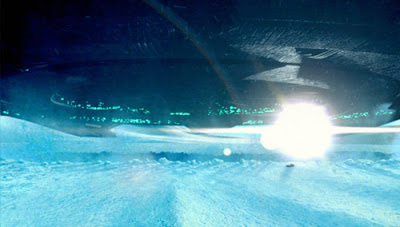 06. An alien ship in crashes in Roswell in 1947, but its pilot is murdered by dark forces within the U.S. government. The aliens behind the crashed ship forge an alliance with an International Syndicate on Earth to enslave the human race (turning it into a breeding ground, for the Earth's original life form: the black oil). This global consortium sells out its own species to the aliens, permitting (while simultaneously discrediting) widespread alien abduction. (The X-Files[1993 - 2002]).  The members of the syndicate will be allowed to survive, naturally, after the new regime takes over during a national emergency. "Fight the future!" 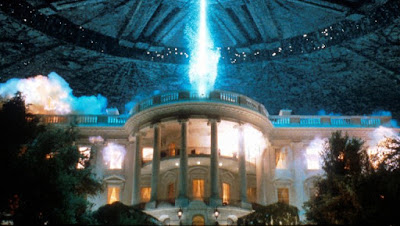 05. Gigantic alien saucers arrive on Earth and, after a coordinated countdown, use their powerful weapons to obliterate cities around the world. They destroy the White House and other monuments (including the Statue of Liberty), nearly wiping humanity off the face of the planet. Fortunately, these ultra-advanced aliens use computers compatible with our own, and a virus is uploaded to their mainframe which makes the aliens susceptible to human counter-attack. (Independence Day [1996]). 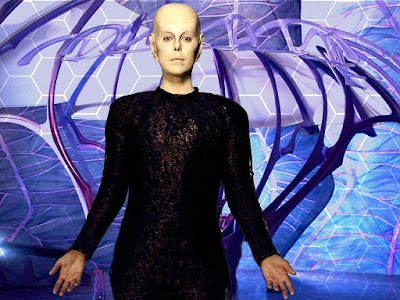 04. The Taelons come to Earth promising peace and new technologies for the human race. Unfortunately, the Taelons are a dying race, and are secretly using humans or dark purposes, including strange breeding experiments, and the recruitment of our young to fight in a war against the Taelon enemy. A human resistance movement springs up on Earth, and over the years another secret is revealed: The Taelons are fighting an even more hostile enemy, which also wants to take over the Earth. (Earth: Final Conflict [1997 - 2002]). 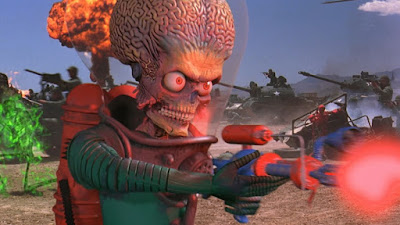 03. Aliens from Mars come to Earth, and basically troll everyone on the planet. They enjoy wiping out humanity by shrink rays, disintegration rays, and other bizarre means. They also perform strange experiments on our people, creating animal-human hybrids. Fortunately, yodeling kills them.  "Ack ack! (Mars Attacks [1996]). 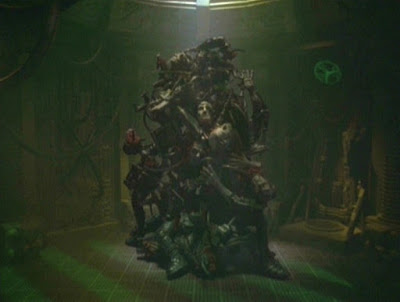 02. In the 24th century, in the Delta Quadrant, the U.S.S. Voyager encounters a race of berserk aliens in fluidic space, called Species 8472. These aliens, who go by the mantra "the weak shall perish," are so terrifying that the Borg are actually scared of them.  Captain Janeway makes an alliance with the Borg, to send the psychic, savage aliens back to fluidic space. (Star Trek: Voyager  [1995 - 2001]). 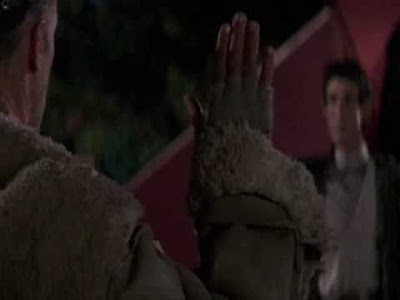 01. In the Mirror Universe, the peaceful and logical Vulcans land on Earth, following the successful test flight of Zefram Cochrane's warp ship, the Phoenix. Th kindly Vulcans are greeted, in this universe, not with a handshake and open arms, but with fire-arms. All hail the Terran Empire. (Star Trek: Enterprise [2001 - 2005]).