In “The Hungry Sea,” Penny (Angela Cartwright) and Will (Bill Mumy) are rescued from the dead city tomb by the rest of the family and Don (Mark Goddard). They all flee from the city to the Jupiter 2, only to learn (from the Robot) of the planet’s irregular orbit.

If the Robinson family doesn’t seek warmer ground, it will all freeze to death -- even in the safety of the Jupiter 2 -- within an hour.

As the temperature drops precipitously outside, the Robinsons and Major West board the chariot and head across a lake of ice, bound for warmer temperatures. A petulant Dr. Smith (Jonathan Harris) refuses to leave the Jupiter 2, however, and stays behind.

En route to warmer territory, the Robinsons are shocked to learn that the temperature is now rising again.  They can return home!

But to do so, they must survive a scorching sun, and a sea of ice now turned to churning, roiling water… 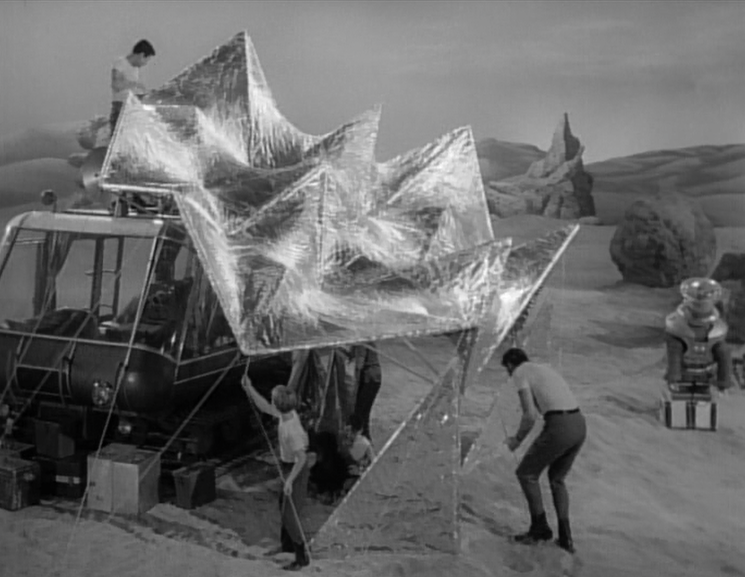 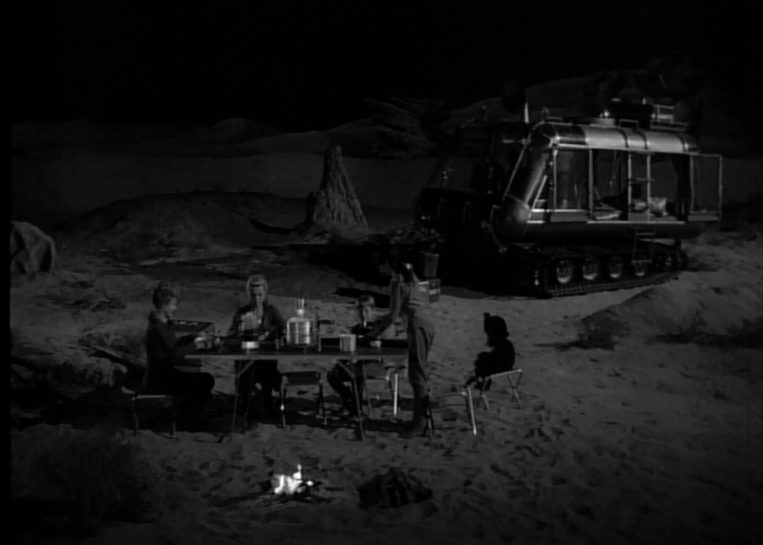 “The Hungry Sea” is another rip-roaring Lost in Space adventure episode that could be classified as a transplanted Western.  If you ignore the sci-fi bells-and-whistles, what you really have here is a story of pioneers attempting to survive in a new and dangerous land.

That land is dangerous, the weather is dangerous, and the people -- in such a crisis -- grow tense and irritable.  Through it all, however, the central unit of human civilization, the family, holds together and tries to find and acknowledge cause for hope.

I am not a religious persona at all, as most of you know, but I enjoyed the moment in “The Hungry Sea” wherein the Robinsons huddle together and pray, and read a verse from their Bible. They give thanks, according to their belief system, for their continued survival in the most difficult of circumstances. There’s just something humble and true about this moment.  No matter where man goes, or how far he travels, he will take his identity and world-view with him.  In a new land, anything from home -- family, Scripture, the basic necessities -- is something to grab onto, and to hold tight. 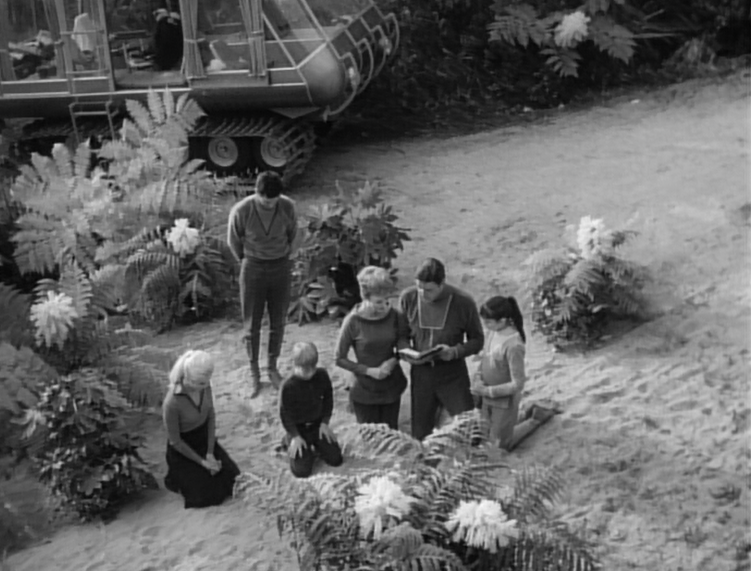 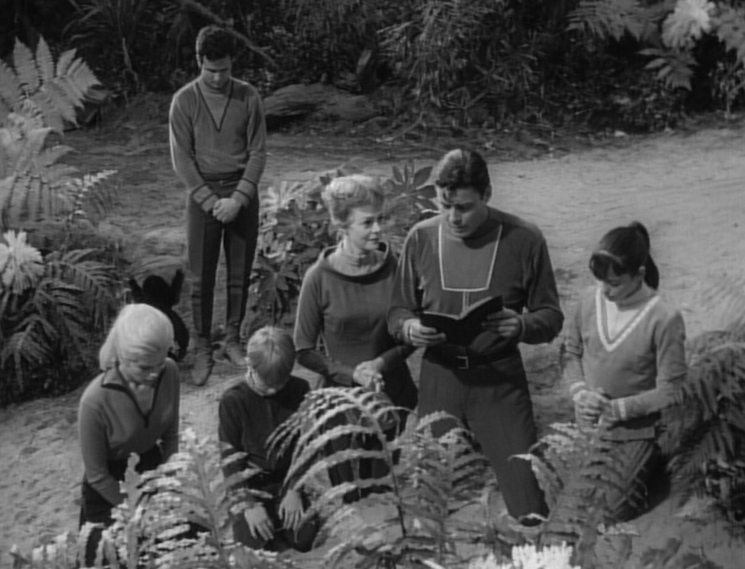 Here we see a lovely family -- like yours our mine -- on an alien world trying desperately to survive against impossible odds, and stopping to acknowledge forces in the universe larger than itself.

Again, I’m an avowed (and happy) atheist, but this moment is beautifully presented, and suggests the universality of the human condition.

I especially enjoy “The Hungry Sea,” too because it is another chariot-centric episode.  Here, the Robinsons pile into their all-terrain vehicle, and it carries them across ice fields, and -- terrifyingly – a swirling, hungry sea. 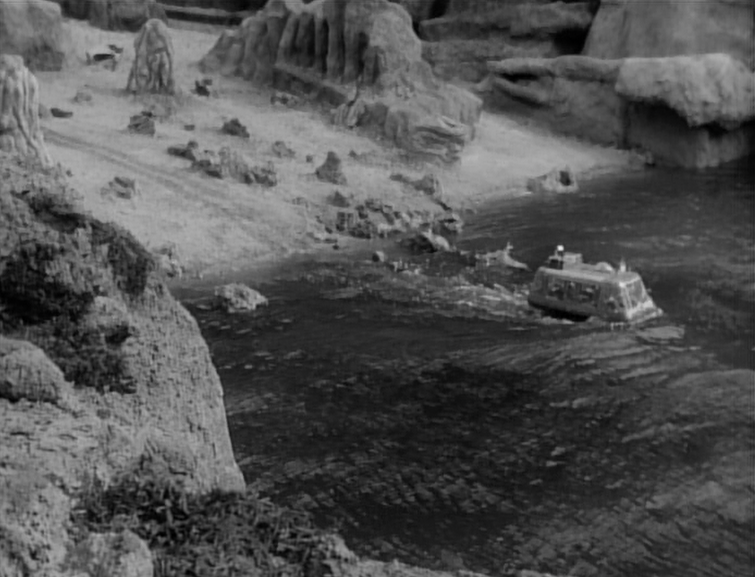 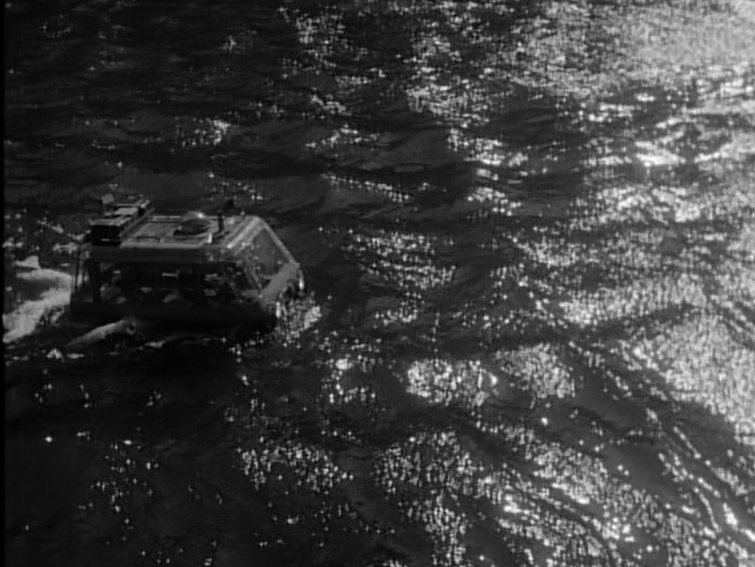 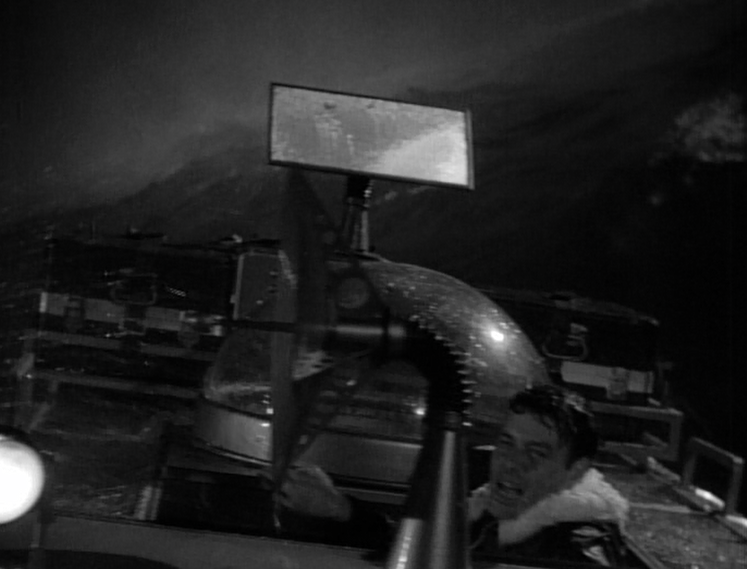 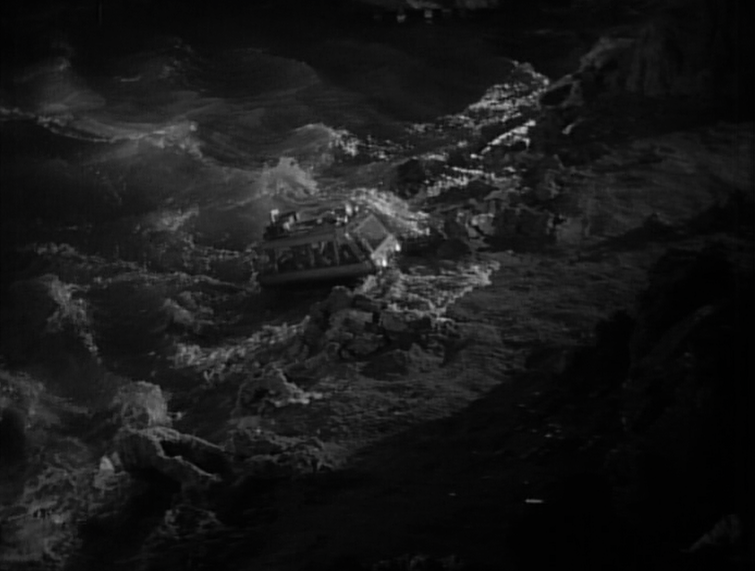 The special effects that depict both of these obstacles are well-vetted, and hold up nicely after fifty years.  As far as I’m concerned, Lost in Space is at its best not contending with so-called alien life-forms or invasions, but simply showcasing how difficult the pioneers have it in an environment very unlike Earth’s.  With a little ingenuity, the writers could have stuck to this template, and avoided a lot of the silliness that is to come.

There are only two things in “The Hungry Sea” that I found troublesome.

First, Smith has only an hour to live before he freezes to death on the Jupiter 2.  Fortunately, the temperature rises, and he survives.

But, we just saw in a recent episode that the suspended animation tubes/facilities on the craft still function.  Smith was imprisoned in one such tube – frozen – for a spell in a previous episode.  If he risks being frozen now, why not go into a tube and ride out the freezing temperatures in suspended animation?  In fact, the whole family could have stayed at the Jupiter 2 and used their respective tubes, though West and Smith would have been out of luck.

But again, it’s an option that should have been weighed.  John and Maureen might have left their children in the suspended animation tubes, while they sought warmer land on such a treacherous journey.

Secondly, I am intrigued about how dangerous this planet is turning out to be.  I love the moment in the episode when the sun starts to scorch the Robinsons’ make-shift encampment, and the chariot gets too hot to touch.

But, again, this is really is one hell of an irregular orbit.  Since the Robinsons are stuck on this world for a while, that means the wild extremes of weather should repeat, and repeat often.  But, at least so far as I know, they don’t.  The settles should be dealing with this cycle of extreme heat/cold more frequently, right?  And of course, if that is true, it would be hell on the crops.

“The Hungry Sea ends with a radar blip bearing down on the Jupiter 2, and that leads us to the next story: “Welcome Stranger.”
at April 13, 2018

Email ThisBlogThis!Share to TwitterShare to FacebookShare to Pinterest
Labels: Lost in Space