While the Enterprise races to the Quadra Sigma system to help miners and families caught in a gas explosion at a Federation facility, the vessel is unexpectedly intercepted by the meddling omnipotent being known as Q (John De Lancie).

Q has returned to bestow god-like powers upon a human being, but Captain Picard (Patrick Stewart) wants no part of his machinations.

To get his way in the matter, Q teleports the bridge crew -- save for the captain -- to a weird battlefield on an alien world. There, he forces them to engage in a game to the death involving strange “animal-things” in Napoleonic uniforms. Q gifts Riker (Jonathan Frakes) with the power of the Q to save his friends when the deadly game reaches its conclusion.

But once Riker uses the power of the Q, will he be corrupted by it?

Upon return to the Enterprise, Picard orders Riker to refrain from using his new powers under any circumstances, an arrangement the executive officer regrets immediately when he finds a child of the miners’ dead in a cave-in. He believes he could have saved her.

Picard relents in regards to Number One’s new powers, but when Riker offers to give the command crew their deepest dreams, he finds they are far wiser than he. They refuse his gifts, and he sees the error of his ways.

After Riker renounces his powers, Q is cast out from the Enterprise, agreeing never to return, and never again to interfere in the matters of man. 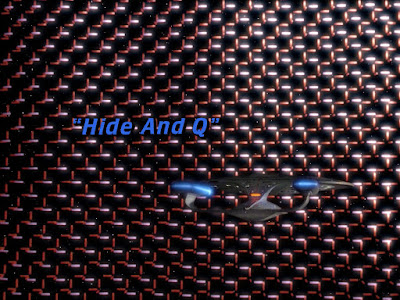 “Hide and Q” is a fun episode of Star Trek: The Next Generation (1987-1994) that -- while charting no new ground for the franchise -- offers some fun performances, especially on the parts of John De Lancie and Patrick Stewart. Also, Riker finally gets to prove himself more than a loyal lap-dog to Picard, expressing his own views on a matter of life-and-death (no matter how wrong-headed).

In terms of franchise history, the pilot that sold the original series in 1966, “Where No Man Has Gone Before,” concerned an Enterprise crew member, Gary Mitchell, who develops God-like powers, as well-as God-like arrogance. 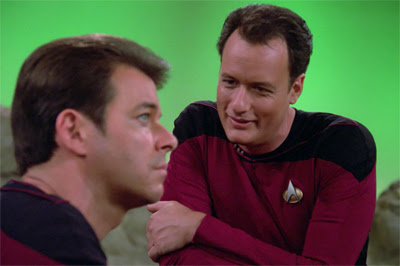 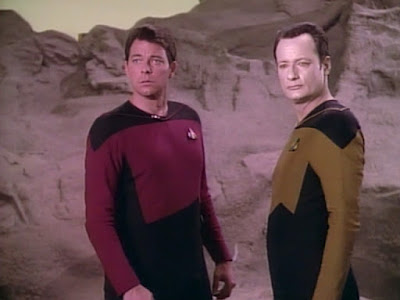 In “Where No Man Has Gone Before,” Mitchell was irredeemable, and Kirk had to dispatch with him in a fist-fight. In The Next Generation, Riker learns and grows, instead, and realizes the error of his ways. When all his friends refuse his “gifts,” he recognizes how flawed his thinking has been.

Like many early episodes of Star Trek: The Next Generation, “Hide and Q” brings up some intriguing ideas, only to abandon them quickly. With great fanfare, Q introduces the captured bridge crew to a game, and tells them there are no rules. Tasha (Denise Crosby) gets put in an existential “penalty box.”

But then, there is no real game, and Riker zaps the crew back home, to the starship.  The game is a half-thought out idea, the “animal things” not real players, just a momentary threat. A game must have an objective for each team, and that objective can’t just be “stay alive” until someone stops the proceedings. It’s a change in premise, mid-way through the episode.  The death scenes of Wesley and Worf, however, are a lot of fun, and even shocking in their own way. Not so much that they occur (we can guess the demises will be undone), but in the fact that they are portrayed as gory. We see Wesley impaled, and there’s plenty of blood. 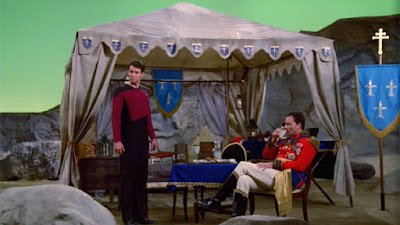 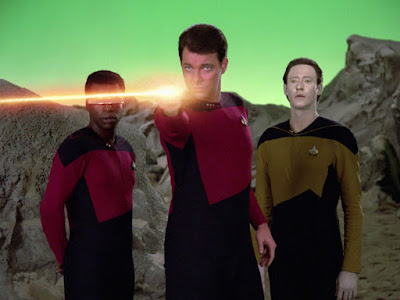 Despite the changed premise mid-way through the episode, what follows it is not necessarily bad. The episode’s final sequence, with Riker “guessing” the dreams of his friends, is very effective in character-building.

We see Worf’s (painful but amusing) idea of sex, with the appearance of a growling Klingon female, and would-be mate. We see Geordi with “normal” sight, and therefore Levar Burton’s expressive eyes.

And we also see Wesley as a twenty-five year old, which is a little cringe-inducing, and weird, truth-be told. 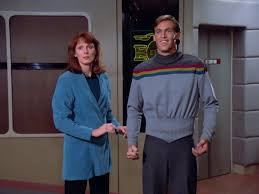 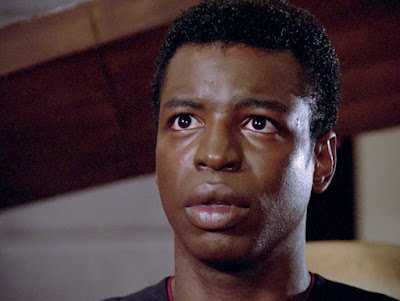 In this scene, Data quotes Polonius, from Hamlet (“This above all; to thine own self be true.”), which brings up my favorite scene in the episode: Picard’s hectoring of Q using quotations from Shakespeare.  In fact, the nemeses have a kind of Shakespeare duel in the NCC-1701-D ready room.

Q quotes MacBeth to demean humanity and his existence: “Life is but a walking shadow, a poor player that struts and frets his hours upon the stage, and then is heard no more. It is a tale told by an idiot, full of sound and fury, signifying nothing.”

Picard responds, appropriately, with another Shakespeare selection. He quotes Hamlet, Act II, Scene II: “What a piece of work is man, How noble in reason, how infinite in faculty, In form and moving how express and admirable, In action how like an angel, In apprehension how like a god.”

This response enrages Q, but fits perfectly with the central debate of the episode. Q sees mankind as a tool to be manipulated, one with no real value. Picard sees mankind growing, becoming -- over time -- more and more admirable. 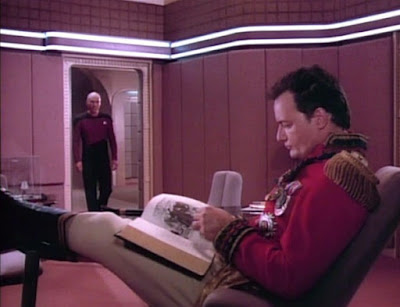 This scene between Q and Picard may represent the captain’s finest moment in the first half of season one, since he so thoroughly outwits and irritates the God-being.

And “Hide and Q” does well by Riker, as well.

Riker grows angry that Picard has forbidden him from using his new powers. For once, he disagrees with the Captain, and challenges his authority. It’s nice to see that Riker can grow angry, and emotional, and is not always perfect and loyal. I have complained in my episode reviews before about how the characters in Star Trek: The Next Generation tend not to learn new things. Instead, they are the smug teachers, having all the answers from the beginning.  This episode is a notable exception.  Riker actually learns something about his friends, his captain, and his own weaknesses in this tale. Frakes plays Riker’s embarrassment at the end quite well.

Finally, the episode ends with “Q” being taken by the Continuum, over his protests, from the bridge of the Enterprise.  The moment is highly reminiscent of Trelane’s exit in the original series episode “The Squire of Gothos” and Charlie’s similar goodbye in “Charlie X.”

We can be grateful, however for Q’s return, in season two. When we next see the omnipotent alien, he provides Star Trek: The Next Generation with one of its finest hours (and the introduction of the Borg), in “Q Who.”