Summoned to the Xendi Sabu star system by the Ferengi, the Enterprise waits for three days for a further transmission, much to the dismay of Captain Picard (Patrick Stewart).

Strangely, Captain Picard develops a headache, which Dr. Crusher (Gates McFadden) can “cloak,” but not eliminate.

Soon the Ferengi make their move. Daimon Bok (Frank Corsentino) has arranged a unique gift for Picard. He has recovered Picard’s previous command, the Constellation class U.S.S. Stargazer, which Picard was forced to abandon nine years earlier; following a sneak attack from an alien vessel.

As Bok reveals, that vessel was a Ferengi ship, and the encounter is now known as “The Battle of Maxia” by his people.

As Picard learns more, he starts to experience powerful memories from his last day aboard the Stargazer, and that fateful battle. The only way his crew survived the attack was a last ditch gambit now known in Starfleet lore as “The Picard Maneuver.”

As Picard grows more unable to discern past from present, the Enterprise crew learns that Bok is utilizing alien “orb” devices to trigger his memories, an attempt at revenge for the death of the Ferengi’s son, who commanded that alien ship all those years ago. 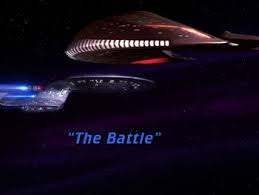 “The Battle” is another minor, and undistinguished episode of Star Trek: The Next Generation’s (1987-1994) troubled first season.

This makes the third story out of eight to feature an incapacitated Captain Jean-Luc Picard (the other two being “The Naked Now” and “Lonely Among Us.”)  Here, he takes command of his old ship, the Stargazer, and attacks his current ship, the Enterprise.

If we are to run a check on Captain Picard’s record in the first eight episodes of the series, we’ve got three instances of the character being incapacitated, and two surrenders by Picard of the Federation flagship (“Encounter at Farpoint,” and “The Last Outpost.”)

Again, had these instances and scenarios been spread out over an entire season of twenty-four episodes, we would have a different first impression of Kirk’s successor. As it stand, he isn’t a towering figure of command, at least not yet. 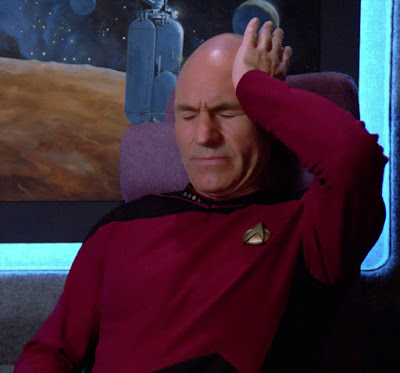 If any character suffers more deeply than Picard does in the first stretch of TNG episodes it is Wesley Crusher.

It’s as though the writers are deliberately trying to undermine the poor kid. Here, once more, he proves himself cleverer than the Starfleet officers who represent “the best of the best.” In “The Battle,” it is Wesley -- not a trained professional -- who realizes that Picard’s brainwaves are in “tune” with broadcasts emanating from the Ferengi Marauder.

The problem, as we have seen before, is that by making Wesley the “hero” so often, he not only seems like an obnoxious know-it-all, but the other characters, from Riker and Geordi to Worf and Yar -- seem incompetent.

Don’t even get me started on Data. He’s supposed to be able to complete 60 trillion operations a second, and still Wesley figures out the similarity in patterns before he does.

Since I ran a tally for Picard above, I’ll give you Wesley’s tally at this juncture. In the first eight episodes, young Mr. Crusher provides the answer that saves the day in three stories: “The Naked Now,” “Where No One Has Gone Before,” and here in “The Battle.”

So if you were serving on The Enterprise during the series’ first season, there was a 37.5% percent chance you were alive because of a wet-behind-his ears, untrained genius teenager.

Still, you’d be glad to have him aboard, considering Picard’s track record!  How does Acting-Captain Crusher sound?

Seriously, it’s easy to pick on The Next Generation at this early juncture, but it’s a bit of a wonder that no writers or producers were seriously looking out for how viewers might perceive these characters, hour-to-hour, episode-to-episode.

In terms of other elements in this story, one tough one to swallow is the condition of the Stargazer. It’s pretty much intact, it seems.

I understand the Ferengi must have done some repair work, but just in terms of the ship’s structure, it still possesses its saucer section and all four nacelles.

Consider for a moment, how the Reliant looked after a similar battle, in The Wrath of Khan (1982). The Enterprise blew off a torpedo pod and a nacelle in the Battle of the Mutara Nebula (before Khan detonated the Genesis Device). It was a wreck. It clearly went through a battle.

Now look at the Stargazer by comparison. Structurally sound. All engines intact. There’s some cosmetic damage inside the ship, but not enough to merit evacuating it.

Once again, we have a reason to question Picard as a captain. Why’d he abandon a ship that is still, largely, space worthy? 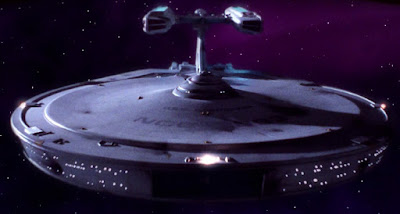 There is another problem that crops up in "The Battle," and again and again on this show: lax or incompetent security.

Here, Worf just unquestioningly delivers a heavy trunk from a Ferengi-controlled vessel (the Stargazer) and deposits it in the captain’s quarters, without checking its contents.  Wouldn’t security go over absolutely everything, especially as it is going to the personal quarters of the ship’s commanding officer? 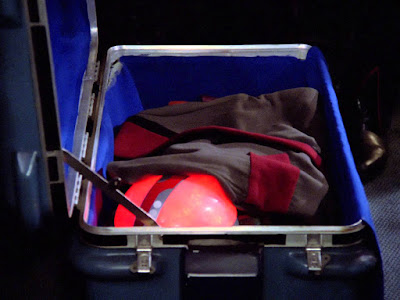 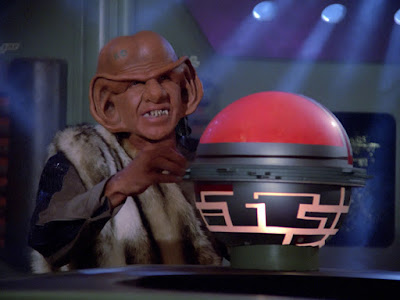 Dr. Crusher should also be on the list of incompetent officers, at least in this episode. Several top-rank Starfleet officers witness Captain Picard, in a briefing, unable to distinguish past from present.

And yet Crusher doesn’t relieve the captain, even with prior knowledge of the fact that he is experiencing debilitating headaches. We know from Crusher's comments earlier in the episode that headaches are no longer common.  (They must have been cured since the Original Series era, since Kirk had a headache in "The Trouble with Tribbles").

So, any good doctor would relieve Picard based on his physical condition, and the stress of the Ferengi situation.

The whole revenge plot is rather hackneyed too. It's been done before on Star Trek, and done far better.  Bok is no Khan. Let's just put it that way. 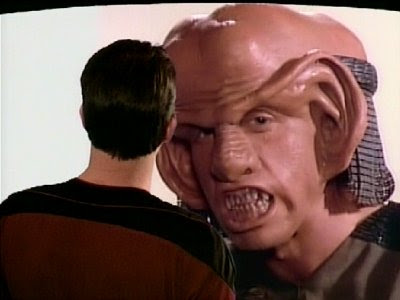 One nice aspect of “The Battle,” however, is Riker’s friendship with Kazago (Doug Warhit), first officer of Bok’s ship. The two characters develop a nice rapport over the course of the episode, and come to trust one another. Something about the relationship seems oddly realistic. Both men are loyal officers, and yet both men know something is amiss with their respective commanding officer. Perhaps out of empathy for their opposite number, they unexpectedly develop a sense of trust.

The final scenes on the bridge of the Stargazer, with Picard surrounded by the “ghosts” of his Stargazer crew, are also well-visualized, thanks to director Rob Bowman.

But overall, "The Battle" another decidedly mediocre show; with some sloppy storytelling and a reliance on clichés we have already seen on the show (the genius kid, and the incapacitated captain, to name two.)