In “Fairy Tale of Doom,” Toyman unveils his “newest and most awesome” invention, a weapon which can zap any living being into the pages of a book.  If someone becomes trapped in said book for more than twelve hours, they are stuck there “forever.”

The Legion of Doom traps Hawkman in Jack and the Bean Stalk, which pits him against a giant. And the Man of Steel is tricked into the world of Gulliver’s Travels, and captured in Lilliput.

Meanwhile, Batman, Robin, Green Lantern and Black Vulcan are trapped in a pit in the Hall of Justice, unable to save their friends.  Meanwhile, the clock ticks down... 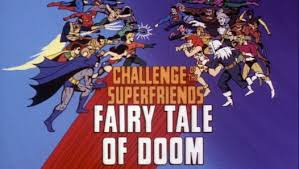 Another episode of Challenge of the Super Friends (1978), another ridiculous (but enjoyable) plot-line. This week, the Legion of Doom traps our favorite DC heroes in the fictional world of books.

It’s a dopey idea -- “Holy Science Fiction!” as Robin exclaims -- and yet an installment filled with fun little Easter eggs.

For instance, the Nautilus, Captain Nemo’s submarine from Jules Verne’s 20,000 Leagues under the Sea, makes a guest appearance in “Fairy Tale of Doom,” and in design it looks almost exactly like the beloved Disney Nautilus from the 1954 film. 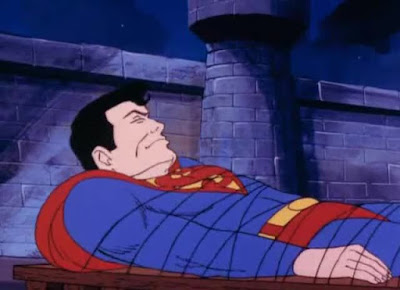 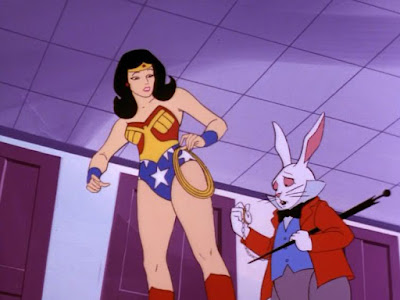 Later, while the superheroes fight in Japan, we see a sign for “Toho,” the studio that produces the Godzilla films (and which had licensed Godzilla to Hanna-Barbera for a 1978 Saturday morning series of his own…).

Otherwise, this is your standard episode of the series. Everyone announces what they are going to do, as they do it, and a character inevitably states “That’s what you think!” This time, Toyman gets the honor.

And, of course, the situations are ridiculous. I noted above that Batman, Robin, Green Lantern and Black Vulcan become trapped in a pit in the Hall of Justice. It has an open-ended top, but the series writers apparently forget that both Black Vulcan and Green Lantern can fly. A hole in the floor shouldn’t impede them;