Cult-TV Blogging: The Immortal: "Reflections on a Lost Tomorrow" (October 8, 1970) In “Reflections on a Lost Tomorrow,” tycoon Arthur Maitland (David Brian) and fugitive Ben Richards (Christopher George) both seek out Doctor Walter Koster (Jake Albertson), a  local physician who believes that he can stop and even reverse the aging process.

After learning that Koster and his lovely daughter, Dr. Anne Koster (Rosemary Forsythe) are trustworthy individuals, Ben Richards confides his secret to them, and consents to testing. Perhaps, if he can unlock the mysteries of his unique blood, he will no longer be a hunted man. At least that’s the hope.

Unfortunately, Maitland shows up at the Koster Clinic too, also seeking treatment. With Fletcher (Don Knight) at his side, he offers to give Koster a million dollars to continue his research. At first, Koster seems incorruptible, but before long, he sells out Ben for the promise of making a difference with his work.

Fortunately, the doctor sees the error of his ways, and with Anne’s help works to free Ben from custody. The Kosters help him escape from the clinic, but Ben has grown close to Anne and their goodbye is sorrowful. 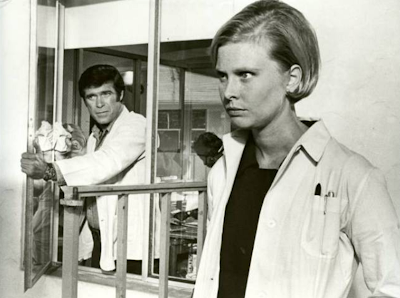 Although lacking in any real science fiction storytelling, “Reflections on a Lost Tomorrow” is another riveting episode of the short-lived The Immortal (1970-1971). The episode favors suspense over action -- which is a bit of a change, -- and the romance between Richards and Anne doesn’t feel at all forced, remarkably, even though it is a trope of man-on-the-run series such as this one.  The result is an entertaining hour.

“Reflections on a Lost Tomorrow” is very much about character, particularly the character of cantankerous Dr. Koster.

When he first see him, he is a guest on a local TV series “Frontiers of Science,” operating a clinic, and happy with his place in life. He loves his work in fact, and is clearly a genius in his field, even without notoriety, fame, or the promise of a professional legacy. Koster resists Maitland’s efforts to corrupt him, at least for a while, but loses sight, finally, of his oath to do no harm.  It takes a while for Koster to understand that his real legacy in this life is Anne, a better version of himself, perhaps, and she shows her father how to be his best self again.

It’s fascinating how Maitland manages to appeal to Koster’s vanity over time. Koster claims he is concerned with “millions of lives” and therefore doing the right thing. It is Anne who must remind her father that if he gives in, Ben will be “…caged like an animal…long after we’ve died.”

In other words, you can’t be a hero for saving millions if you are willing to let one of your patients suffer. 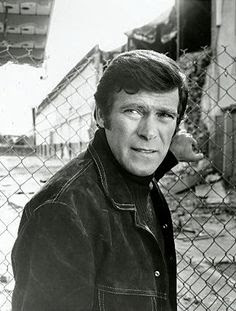 On the other hand, this discussion simultaneously lessens our identification with Richards. Ben has the capacity, basically, to change the world, if only he accepts some limits on his freedom. As is pointed out, he doesn't have to turn himself in to Maitland or some other greedy private individual. He could surrender to the government, and hope to be treated fairly.

Richards' insistence that he's "gotta be free" means, essentially, that he risks squandering his gift, and never helping those whom he could save.  At time, this feels very, very selfish.

In terms of presentation and style, “Reflections on a Lost Tomorrow” doesn’t exactly end on a high-note, unfortunately. Anne helps Ben escape from a strait jacket, and he puts on a disguise before fleeing the clinic, but he’s been drugged, so he’s shaky. To escape the building, he must walk out on his own two feet, and not draw attention to himself.  This is difficult, and we can see how groggy he is, thanks to George's good performance.

Director Leslie H. Martinson shoots the scene well, to, again, heighten the sense of suspense. But, alas, he is undercut by the scene’s lack of extras. We get several point-of-view shots, as Richards walks the halls of the clinic, trying to escape. We see the same patient in a robe twice, for instance, in different rooms. Once, he walks by Richards. The next time we see him, Richards enters a new room, and he is sitting down there. Another extra tries to disguise himself by wearing a surgical mask in one of his two shots, but we’ve clearly seen him before as well.

If you have an attentive eye, these repeat “extras” will undercut the hard-fought attempt to build suspense.

Finally, this episode adds significantly to the sense of villainy surrounding Maitland. When he learns that Koster has betrayed him, for example, the rich man's default position is to threaten to burn down the doctor’s clinic. That’s his first instinct. To commit arson to hurt the person who defied him. The fact that the clinic is filled with sick people is immaterial to the guy. It’s actually a shocking moment because it is so ugly. We know Maitland is single-minded in wanting to live forever, to cage and use Richards at his discretion. Here, we see he is vindictive and murderous too.