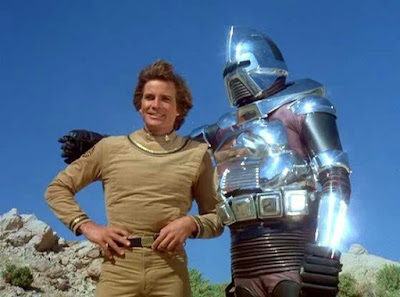 What does it mean when I write about “my enemy, my ally?

You may have seen this dramatic idea played out, large scale -- human pilot against alien Drac -- in Wolfgang Peterson's epic film, Enemy Mine (1985). But a similar tale has also been a staple of sci-fi TV programs across the decades.

This "My Enemy/My Ally" narrative conceit proved especially popular during the 1970’s and 1980’s. Perhaps it was a coded reflection of the Global Cold War between the U.S. and the Soviet Union, a conflict that separated the world into two intractable sides, and ideologies.

Episodes of the "My Enemy/My Ally" variety often suggest that -- once thrown together into a life-threatening scenario -- enemies can find a common bond if only they leave their pre-existing, hostile, cultural beliefs behind.

The notion is that understanding and trust are seeds that can grow inside people over time, and even blossom into peaceful co-existence, tolerance and hopefully, real friendship. In the era of mutually assured destruction, it was powerful for sci-fi television to suggest that -- just by being thrown together into a common danger with our mortal enemies -- we could prevent nuclear annihilation.

By personally knowing our enemy, we could make a better choice...for the planet.

Gazing back across the decades, you can see several examples of this My Enemy/My Ally story template.

For instance, in the year 1970, an episode of the jingoistic (but utterly brilliant...) Gerry Anderson series U.F.O. saw S.H.A.D.O. astronaut Paul Foster and an alien pilot work together to survive on the desolate lunar surface following a battle, in the installment called "Survival." Different ideologies/different agenda, but a mutual, positive purpose outside the political confines of a larger war-between-the-planets. 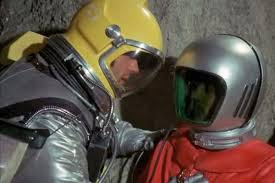 Then, in 1974, a first season episode of the Krofft Saturday morning TV series Land of the Lost found a Sleestak named S'latch and human protagonist Rick Marshall (Spencer Milligan) trapped in a deep, smoky pit inside the Lost City. 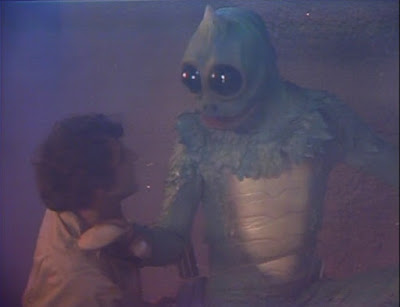 Again, these two opposing individuals had to learn to trust, and to work together, to escape...before the Sleestak God made them lunch. When S'latch was wounded during an escape attempt, Rick Marshall rescued the Sleestak from the pit, and earned the creature's loyalty and friendship. 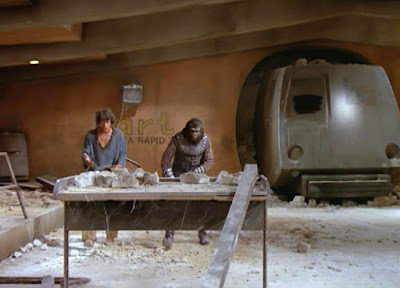 The same year saw an intelligent simian of future Earth, General Urko (Mark Lenard) team up with a human astronaut from the past, Peter Burke (James Naughton) in the Planet of the Apes series episode “The Trap. 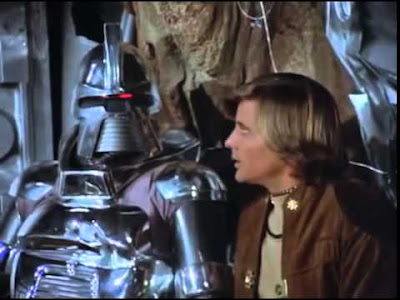 Likewise, in "The Return of Starbuck," an episode of Galactica: 1980 from May of '80, Lt. Starbuck (Dirk Benedict) and a Cylon enemy crash-landed on a barren planet after (another) pitched space battle. A lonely Starbuck re-programmed "Cy" to become an ally, and they kept each other company for a time...until Cy gave his life to save his human friend from further Cylon troops.

As late as November of 1989, Star Trek: The Next Generation took a stab at this "My Enemy/My Ally"-fashioned narrative. 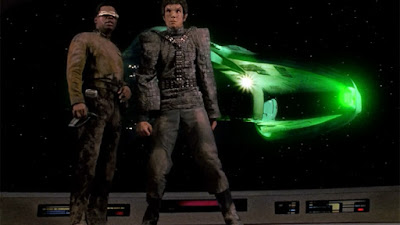 In "The Enemy," Engineer Geordi La Forge (LeVar Burton) became trapped on an inhospitable world, Galorndon Core, with only a zealous Romulan soldier for company. The sub-plot of two enemies finding understanding on the isolated planet was artfully balanced against a story of Worf refusing to give aid to an injured, dying Romulan aboard the Enterprise. On the surface: enemies helping one another, their mutual existences threatened. On the Enterprise (and inside the "culture war" between the Federation and the Romulans...), one man/Klingon just couldn't let go of the hate-filled past.