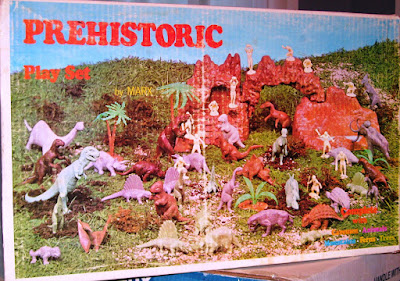 To this day, I cherish memories of an early birthday (I must have been four or five years old...) when I received this glorious "Prehistoric Play Set" sold and marketed by Louis Marx Co., Inc.

In particular, I have very distinct memories of opening up the huge playset box in our living room at my home at 7 Clinton Road in Glen Ridge, New Jersey, seeing the contents, and playing madly with the dinosaurs (and cave-men) for hours, even as my granny visited. 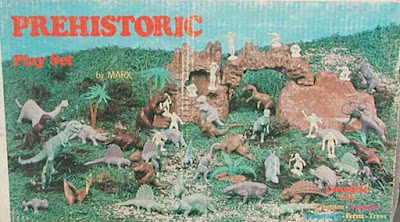 I seem to remember that my granny gave me the set, but my memory could be confused in that regard. As a child, I was absolutely obsessed with dinosaurs, so this was the perfect gift.

This huge prehistoric Marx playset (tagged as Style 3398 on the box -- whatever that means...) comes "complete with Cavemen * Animals * Mountains * Ferns * Trees."

There are probably about thirty-six dinosaurs or prehistoric creatures included in the set, plus a cave-person dwelling (reachable by ladder...) and plastic mountains (complete with a ridge and a small lake...). Populating the set are ten or so plastic cave-men molded in various action-oriented poses (some poised to throw rocks at the nearby dinosaurs, no doubt...) 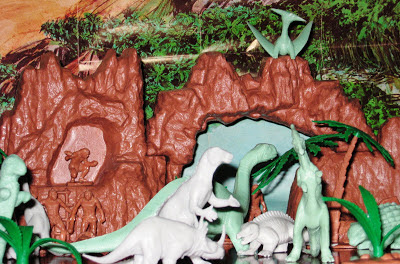 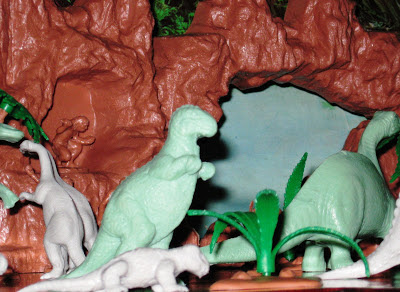 Among the dinosaurs included (molded in green, grey and brown...) are the Allosaurus, the armored Ankylosaurus and Stegosaurus, a Dimetrodon, an Iguanadon, the duck-billed Trachodon, the horned Triceratops, and a Brontosaurus. There was a T-Rex, a Woolly Mammoth, and even a saber-toothed tiger too. Now, you may realize that these creatures didn't actually all exist in the same time period, but as a kid I didn't care much about the scientific accuracy of the toys.

Simply put, this was Skull Island, the Lost World, the Land of the Lost, Monster Island, and the Valley of the Dinosaurs all rolled into one great toy, and I spent many a day sending in "modern" plastic tanks and soldiers to battle these small plastic behemoths.

Somehow, I had managed to hold on to one squatting plastic caveman (!) from this set for over thirty five years, but in 2008, I acquired a complete playset on E-Bay. It was a gift for Joel on his third birthday, but these days, he lets me display it in my home office. My wife insists that was the (secret) plan all along.