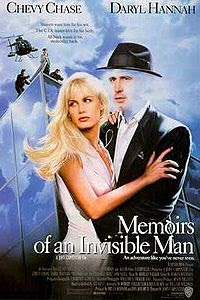 Over at his terrific blog, Fantasmo Cult Cinema Explosion, Jim Blanton joins the debate on 1990-2001 era John Carpenter films, offering a spirited defense of the much-disliked Memoirs of an Invisible Man (1992).

In a detailed, illuminating piece, Jim contextualizes the film as a Carpenter-style updating of the Hitchcock suspense thriller, a "wrong man" picture such as North by Northwest (1960):
If Vampires is a play on Red River, and Ghost of Mars a play on Rio Bravo, then Memoirs is certainly Carpenter’s tribute to Hitchcock. It is nothing less than North By Northwest meets The Invisible Man, with Chevy Case as Cary Grant, Daryl Hannah as Eva Marie Saint, and Sam Neill as James Mason.

In a nutshell it’s a wrong man, cross-country chase, featuring visually dazzling set pieces, an expansive orchestral score, and an undercurrent of humor. They even get on a train at one point. Having read the book (I’ll touch on that more in a moment) I can tell you that this Hitchcockian approach was developed for the movie, and I have to believe that’s what attracted Carpenter to this project. So with Memoirs I’d argue that Carpenter is doing nothing less than what he has done with so many of his movies, by adapting a version of a film favorite into another genre (sci-fi) perceived more agreeable to modern (circa-1992) audiences. So his name being absent before the title notwithstanding, this is most definitely a Carpenter film in the most important sense.