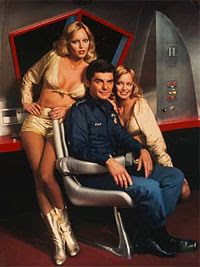 In 1977, Buck Henry did to Star Trek (and science fiction TV programs in general) what he had already done to James Bond (and the spy genre in general) with his previous comedy series, Get Smart.

In other words, Henry crafted Quark, a sharp and funny sci-fi satire; a merciless parody that understood perfectly the content and form of that which it sought to mock (and also, in a weird sense, honor).

Quark the series ran for only seven delightful episodes (following the pilot) in 1978 before a quick cancellation. Yet the series has survived in fandom as something of a legend ever since...and for good reason. Now that the series is finally available on DVD, I'll be blogging the episodes here, beginning with this early pilot (which pre-dated the arrival of Star Wars by just a few weeks.)

First, a small disclaimer: there are some notable differences between the pilot and the eventual series. Most notable among these changes is that the pilot episode features a wacky mad scientist-type named O.B. Mudd in a supporting role; a character who is replaced (mercifully...) in the series by an unemotional and logical science officer named Ficus...an alien from the planet Vegeton.

In Quark's pilot, we join Captain Adam Quark (Richard Benjamin) aboard his United Galaxy Sanitation Patrol Ship. Quark is from the (abandoned) planet Earth, particularly an ancient country called "America" (a country which -- historians believe -- worshipped a talking Mouse named Mickey). Quark cares for an alien pet named Ergo in the pilot episode: a hungry little ball of gelatin (shades of Dark Star...) that would just as soon snack on Quark's legs as doggie kibbles. In the pilot episode (as in later episodes), we are privy to Quark's thoughts: a captain's log of sorts, here called a "star note."

Quark's mission? To boldly collect space garbage baggies (literally giant green garbage bags drifting through space...). He is an acknowledged expert at the difficult garbage collection maneuver, manipulating his ship's "auto-grabs" (giant robotic arms, which shove the baggies into the ship's open mouth).
Quark's colorful crew includes two helms-people: the drop-dead gorgeous clones Betty and Betty (The Double Mint Twins). A running joke in both the pilot and the series is that each Betty claims to be the original article...and points the finger at the other as the second rate copy. Quark never learns which Betty is which.

Also aboard the ship is the chief engineer: an impulsive Transmute named Gene/Jean (Tim Thomerson). Gene/Jean -- like all his people -- possesses a complete set of male and female chromosomes. This makes him a tough-talking macho man in some scenes, and a mincing effete in others. As you might guess, the transition between personalities often comes at inopportune moments.

Finally, there is a cowardly robot named Andy, built by Quark and Mudd. Andy falls in love with a critical piece of the ship's machinery in the pilot episode...and the two machines get engaged.

Quark's base of operations is the space station called Perma One. It is administrated by a bureaucrat named Otto Palindrome (Conrad Janis of Mork and Mindy) and commanded by a disembodied, over-sized head called, appropriately, The Head.

In Quark's pilot episode, Quark is sent on an apparent suicide mission. A giant enzyme cloud has been detected in Sector M82 and is on an intercept course with Perma One, metabolizing all matter and all life in its path. The only ship in the quadrant to stop this menace is...Quark's!

If you're a Star Trek fan, you may recognize this story a parody of the episode "The Immunity Syndrome" about a giant amoeba "sucking" up all life in several solar systems. There's also a Space:1999 episode entitled "Space Brain" about - yeah - a space brain - sending out antibodies to crush Moonbase Alpha and avoid a collision. Even after Quark, Star Trek used a variation of the theme in Star Trek: The Motion Picture, which concerned another threatening "space cloud." Here, the only way to defeat the hungry Enzyme Cloud is to feed it over two-hundred tons of...space garbage.

The greatest thing about this pilot episode is not merely that Quark has pinpointed a suitable old genre chestnut to parody, but that Richard Benjamin portrays Adam Quark as though he thinks he's actually Captain Kirk. Benjamin plays the material straigh (dead straight, actually)t, making his Quark a romantic, a philosophizer and even, after a fashion, a sort of action hero. It reminds me, indeed, of Don Adams' approach on Get Smart. Maxwell Smart was a comic figure, certainly, but he could throw a punch and handle himself in action scenes too.

Similarly, Adam Quark is believable as the captain of this particular ship at the same time that he is very, very amusing. Usually, he's just plain flustered at his turn of bad luck, or the incompetence of his underlings.

The pilot episode also goes a long way towards establishing the bizarre "larger" universe of Quark. On the spaceship, for instance, the crew eats by taking nourishment out of pneumatic tubes. They sleep in "cryogeno-tubes" and traverse decks through a hatch...and a slide. Though the special effects are of 1977 vintage, they hold up surprisingly well today. The gag with the space baggies is a good one.

Also, in the tradition of Rod Serling or Gene Roddenberry, there's even a little bit of socially relevant material about mankind's bigotry in this sci-fi pilot. After Mudd has a negative encounter with Gene/Jean, Quark reminds him that "Transmutes are people like everyone else." Mudd's response: "Would you want your sister to marry one?" In some small sense, then Gene/Jean represents an early portrayal of a gay man on television (concurrent with Billy Crystal's performance in Soap).

Despite some interesting moments like that, one can detect that the Quark format was still on something of a shakedown mission here. (In future episodes, sets and costumes are altered quite a bit, for instance.) A lot of the material in the pilot, about Palindrome and The Head sending a "long distance laser gram" through an infuriating multi-limbed operator called "Interface," feels woefully outdated now. Still, it's an interesting (and timely...) comment on Ma Bell in the 1970s, I suppose. Still, the series would improve dramatically in upcoming episodes with the arrival of Ficus (Richard Kelton), a character designed to parody the loquacious, logical Mr. Spock.

The next episode is a Star Wars parody entitled: "May the Source Be With You."
at September 18, 2008

Email ThisBlogThis!Share to TwitterShare to FacebookShare to Pinterest
Labels: Quark