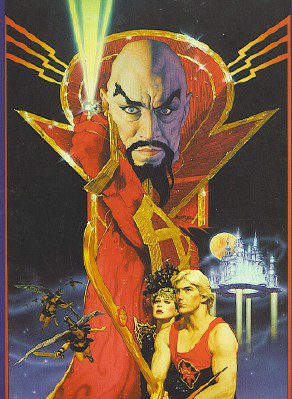 Sometimes, as viewers (and fan boys/girls), we appreciate movies that can't really be defended on objective terms. I mean, let's face it here, just this week on the blog I copped to my enormous affection for Star Trek V: The Final Frontier. Now, I'm not going to sit here at my computer and say that I think it's a good movie, but I do believe it is a very enjoyable one. And I get a kick out of it. I could watch it any time, and laugh and feel good.

So here's the postulate: Can a movie's parts be enjoyable and interesting, even if the sum of those parts is less than quality? I wonder, why do we sometimes really get stuck on movies that are - in the final analysis - not very good? Why do we enjoy them, and perhaps more to the point, why do we go back to them again and again? This is something I'm always watching for and contemplating about, because I'm basically a professional critic. I ponder, what if that crazy gene is going to kick in and I'm going to shout to the world my objective, critical love of The Day After Tomorrow? Wouldn't that be embarrassing?

For me, one of those indefensible - but nonetheless compelling - films is surely 1980's big budget bomb Flash Gordon. My parents took me to see it in theaters in December 1980 for my 11th birthday, along with a gaggle of friends. I loved the film then, but I don't think that nostalgia accounts for the primary reason why.

On the surface, not only does Flash Gordon feature extraordinary production values and set design, but it's got that unbelievable score by Queen and a theme song for the ages. Flash! Savior of the Universe!
It doesn't hurt, either, I guess that the film features luscious Melody Anderson as Dale Ardor, er Arden, and the incomparable Ornella Muti as Princess Aura. Max Von Sydow makes an outrageous and memorable villain as Ming the Merciless and the movie boasts neat gadgets like rocket scooters. There's also a ludicrous (and amusing) "football" action set-piece in Ming's court. Why there's even gore! When Klytus falls on a platform of spikes, his eyes pop out. It's positively charming.

As a kid, I remember being terrified of that insect/monster-thing on Arborea too. You remember that don't you? Flash engages in a contest of wills with Prince Barin (Timothy Dalton!) and each man has to stick his bare arm into this gnarled tree trunk where that slimy creature lives. If the scorpion-y thing catches you, it snaps you with its stinger. This poisons you and you die a horrible death in minutes. No matter how bad the rest of the movie is, this scene still works on me. It's tense...

Watching the film today, I can plainly see the bad special effects (the wire-work involving the Hawkmen is particularly bad). It's not hard to detect Sam Jones' inexperience acting, either. And yet - AND YET - there's something magnificently opulent about this gold and silver fantasy world where planets look like giants tree stumps, moons are Mongo kingdoms and sexy women wear shoulder-pads and skin-tight bodysuits. I know Flash Gordon is meant to be camp, and I guess that's why many true believers hate this Dino De Laurentiis version, but I can pop the movie in the laserdisc player (yes, you read that right...) and watch it any time with a great deal of enjoyment.

So what's your indefensible movie pick? What's that one movie that you absolutely love with all your heart, but which your brain just tells you is bad, bad, bad? What's your guilty pleasure? Come on, ante up. I know you have one.

Some of my other choices in this category would likely include The Black Hole (1979), Godzilla 1985 and...gosh - I don't know if I should admit this, even in passing...