While Galen recuperates, the humans must contend with the grumpy chimpanzee farmer, Polar (Lonny Chapman), and his resentful, superstitious son, Anto (Geoffrey Deuel).

Meanwhile, gorillas are on the hunt for the refugee humans... 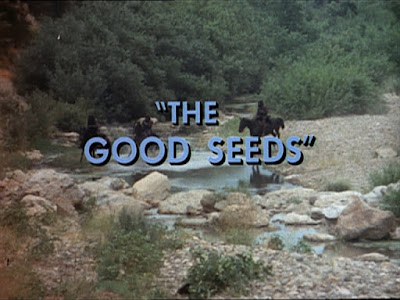 “The Good Seeds” demonstrates well the serious flaws of the Planet of the Apes (1974) TV series.

In particular, this is a series largely devoid of what today we would term mythology.  For example, even a mediocre sci-fi series such as Logan’s Run (1977) was smart enough to develop its mythology. The refugee characters, in their episodic journeys, would encounter the “first runner,” various places that could be the mysterious “Sanctuary,” and contend with issues outside the “civilization of the week.”

The Planet of the Apes series features very little in terms of on-going mythology.  There isn't that added layer to the storytelling. We have the astronauts’ data disc, which can provide details about the trajectory that brought them to this future Earth, if only they can find a computer to play it.  That’s about it, alas.

What mythology could there be here? Well, there are thousands of years of history we could learn about. How did the changeover in planetary dominance occur? When did it occur? Who are, historically, the great ape leaders?

In the absence of mythology, this TV series doesn’t often find stories that grab and hold the attention.  Occasionally, the program will brilliantly handle a contemporary issue with social commentary (mainly involving racism and prejudice). One impressive upcoming story, “The Deception,” is essentially about an ape version of the Ku Klux Klan, for example.

But too many episodes of the short-lived series depend on the simple premise that one of the fugitives (Burke, Virdon or Galen) is badly injured, or captured, and then must be healed or rescued.

Similarly, many episodes are about humans “outsmarting” bad apes.  One future episode “The Tyrant” is like Mission: Impossible on the Planet of the Apes.

It’s not the series is bad, necessarily, only that it is often aimless, and largely uninteresting. “The Good Seeds” falls into this category. It’s a largely inoffensive, but not terribly compelling story about the fugitives spending time with a family of farmers. 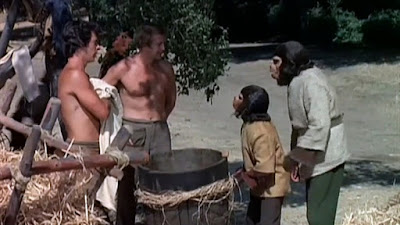 As I’ve noted in previous weeks, the social commentary in the Apes TV series is all about racism; about how the ruling apes treat humans like lesser, inferior beings.  That aspect of commentary is certainly here.

One gorilla notes, for example, that “all humans look alike.”  Urko laments that some humans think “they are as good as we are,” meaning the apes.  And then, of course, we get the sexism of the ape culture. One woman ape is told to “shut up, female.” 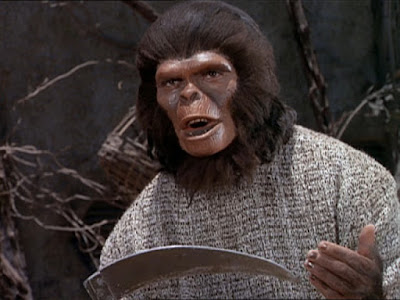 So, “The Good Seeds” does conform to the series’ main line about social disparity on this future world of apes.  I can also see it how the episode attempts to address what I call the medieval mind-set of ape culture. The apes clearly dwell in a pre-Renaissance culture, though it is by (Zaius's) design)

At the start of the episode, Galen expresses amazement at Virdon’s home-made compass. Galen likens the device to witchcraft.

Later in the story, Anto believes that the humans have caused a “hex” on his cow, when in fact she is just pregnant. Both instances reveal that the apes place very little stock in science or learning. Anything that is not known, or different, is automatically considered suspicious, unnatural, or dangerous.

Although the series doesn’t explore the concept fully, this lack of knowledge is not an accident, but a choice. Zaius (Booth Colman) and the Ape Council repress knowledge, knowingly, so that apes and humans will not get any ideas about changing the status quo.

Of course, Zaius knows that humans all-but destroyed the world. Is he so bad for attempting to not repeat the same mistake?  I do wish the series went more deeply into the background on Zaius, and the reason he demands his people (and the humans) live in a state of ignorance. Though, I suppose, he may call it innocence.

Another not entirely palatable aspect of the series is evident in “The Good Seeds.” Virdon and Burke -- the knowledgeable humans -- overcome the “simpleton” apes with their superior human knowledge and know-how.

I say that this is aspect of the tale not entirely palatable because, let’s face it, humans are responsible for the near destruction of the planet.  I’m not saying Zaius and Urko are “good” in any sense. They are zealots who repress the truth (though, as I noted above, apparently for a reason they believe valid).  But it gets tiresome sometimes for the humans to always be victorious, running circles around the ignorant, primitive apes. If humans are so awesome, so brilliant and learned, how come they have lost their perch atop the food chain?

It would be nice, sometimes, to see the humans learn something from the apes, or acknowledge that the apes now rule the Earth because mankind, apparently, blew it.  But that’s more depth than we get in the Planet of the Apes TV series.

“The Good Seeds” is a fine, one-off story about humans and apes learning not to view each other with suspicion and fear. But absolutely nothing in the episode seems important, or vital to the characters or their on-going journey.