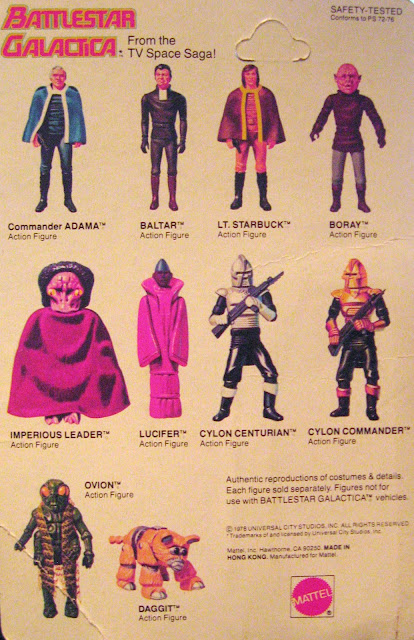 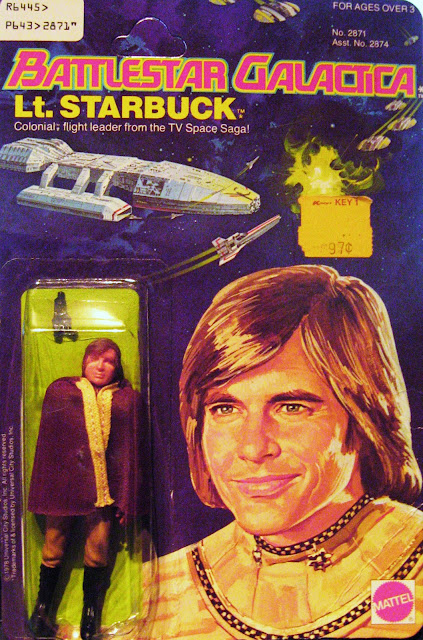 In 1978, Glen Larson’s Battlestar Galactica premiered on ABC television amid a merchandising and toy blitz from Mattel.

The human figures -- Starbuck and Adama -- came garbed with capes and Colonial laser pistols but oddly, their faces boasted no color or facial detail.  The eyes and mouth were left unpainted, giving them a kind of “blank” pallor.

The Cylon came with a fierce-looking, show-accurate rifle, and the Ovion was garbed in a kind of webby yellow shawl.

The second series of Mattel Battlestar Galactica figures consisted of the traitor Baltar, his robotic number one, Lucifer, a golden Cylon Commander, and a pig monster called a Boray from the episode “The Magnificent Warriors.”

There are two big omissions here as you likely noticed from the above tally. 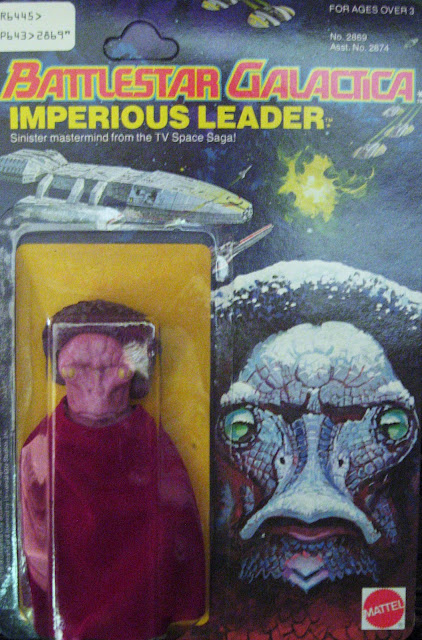 First, no Captain Apollo action figure was produced, and this is roughly akin to releasing a Star Wars line without Luke Skywalker, or a Star Trek line without Captain Kirk.

Secondly, no female figures were produced.  I can understand why no Cassiopiea wasn’t made, given her non-kiddie designation as a“socialator” (prostitute…). But why on Earth wasn’t an Athena figure released?  Athena (Maren Jensen) was a shuttle pilot and bridge officer, for goodness sake.  I can’t think of another 1970s action-figure toy line off-hand (from Mego Star Trek, Black Hole and Buck Rogers to Kenner Star Wars to Mattel Space: 1999) that featured no female characters.

At the time -- as a nine year-old kid -- the bigger concern for me was the glaring lack of a Captain Apollo figure.  I would sub-in a Han Solo figure, but the hair wasn’t right, obviously, and neither was the costuming.

I have very fond memories of my Granny from Texas, Tippie, buying me several of these Mattel BSG figures (and even doubling up on the Cylons so I could create an army…), and how thrilled I was to have them.

Today, I still have all my original figures, though they are very heavily played with, and a few mint-in-box.  If memory serves, Lucifer is among the rarest and most prized of the bunch.
at March 16, 2016

Email ThisBlogThis!Share to TwitterShare to FacebookShare to Pinterest
Labels: Action figure of the week, Battlestar Galactica