“You have been strangely quiet on this subject so I will come right out and ask. What are your thoughts about the new Star Trek series and Bryan Fuller as show-runner?” 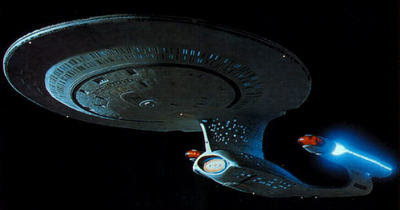 I haven’t been quiet on this topic by design, or out of seething rage or anything.  I just feel it is still really early in terms of the new series’ development, and so haven’t had much to comment on or react to.

But since you asked, here goes: I feel very optimistic.

I love Bryan Fuller’s work (especially on Hannibal) and beyond that outstanding work, he has two other factors in his favor.

First is experience: Fuller has worked on Star Trek before, in the 1990s (DS9 and Voyager).  So he knows how to make Star Trek happen, in a practical sense. He knows the ropes of TV production, and has had success both in and out of Trek.

And secondly, Mr. Fuller is a life-time fan so he understands and enjoys Star Trek for what it is.  He “gets it.”  He’s not out to reboot it or make it like another popular franchise, I suspect, just successfully translate Roddenberry's ethos to the 21st century.

All of this bodes well, I feel, for the new series. Once you add the great Nicholas Meyer to the mix as a writer and producer, the new Trek looks incredibly promising.

As far as what I would like from the new series, I do have some preferences. But hey, don’t we all?

I am not a J.J. Abrams-verse hater by any means. I like the Abrams’ movies (both of them, so far).

But nonetheless, I would like to see a return to the Prime Universe. That’s the universe where Vulcan has not been destroyed and we have the established history of the 23rd and 24th centuries to interact with.

The Alternate Trek universe is absolutely a valid creative outlet for Trek in movie form, but I would prefer to see a return in the new series to tradition, rather than an expansion of a “pocket” realm.

I would also like the new TV series to be set on the Enterprise, approximately 100 years or so after the era of the Next Generation films.

Let’s do what was done so beautifully in 1987: leap forward a century, reveal new technology and new characters, but also maintain the integrity of Starfleet and its personnel and belief system.

Naturally, I would like to see a return of Star Trek’s utopian-thinking, study of humanity, and yes, even the ideal that fighting doesn’t always solves problems.

I would also like to see the new series continue the proud tradition of lauding diversity, and therefore feature a diverse human/alien crew.  And I feel the show needs to comment on the here and now; honoring the franchise's history of social commentary.

Finally, I think it would be great to have Patrick Stewart -- as an elderly Captain Picard -- guest star in the first episode, fulfilling, essentially, the role De Forest Kelley played in “Encounter at Farpoint.”

Let’s honor Star Trek’s past, and then move into a new century!  The final frontier is waiting.

Don't forget to ask me your questions at Muirbusiness@yahoo.com
at March 28, 2016