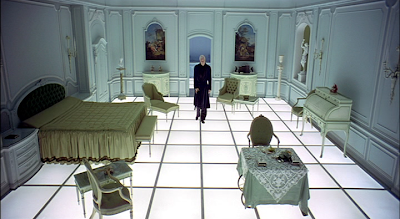 Reader Pierre Fontaine contributes the final  list for this go-round of the Reader Top Ten!

“I really can't think of too many films where the endings have completely blown me away.  This begs the question, "Does a great film need a great ending?"  Not necessarily but the flip side is that there are mediocre films that end spectacularly and therein lies my problem.

So, here's my stab at great Sci-Fi films that have great endings, even if the films themselves aren't really the best representatives of the field.  Also, since I can't imagine myself coming up with ten sci-fi films, I'm going to pepper the list with some close relations to sci-fi.

2001: A Space Odyssey - From the StarGate to the Star Child looking down on Earth, an amazing end to an astounding film.

Planet Of The Apes:  Nothing to add that hasn't already been said.  Perhaps the best "sting" ending of any sci-fi film.

King Kong:  So this is really a fantasy film but it's such a classic film that it's finale needs to be mentioned.  It evokes emotions of regret for the poor giant ape's tragic life while simultaneously evoking classic storytelling by reminding us that "it was beauty that killed the beast".

Bride Of Frankenstein:  Along the lines of King Kong, the last ten minutes or so are filled with enormous pathos for the poor monster.  He's rejected by the mate that's been created just for him and dies in a burning windmill rather than be accepted for the misunderstood creature he really is.

Time Bandits:  Just when you think the story is over, the fantasy world re-emerges and shatters his reality.

Brazil:  While I honestly don't like this movie, the ending is pretty wild.

Star Wars:  As if the escape from the Death Star wasn't enough, there's an extended space battle between spaceships and a planet-sized Death Star.  An award ceremony tops off the movie like a cherry on an ice cream Sundae.  Perfect!

Close Encounters of the Third Kind:  From the moment the Mothership appears over Devil's Tower to the climax when Neary is singled out from all the trained scientists to be travel with the aliens into outer space.  This movie has remained a favorite of mine for those final twenty minutes.

Invasion Of The Body Snatchers: Both the original and the 1978 version are equally terrifying and wholly satisfying!


There are so many other films that have already been mentioned that really belong on this list as well but I had to limit myself to ten films.  Thanks as always for another fun top ten list!

A terrific list, Pierre!  It's nice to see both King Kong and Bride of Frankenstein make your cut.  Time Bandits is also a wonderful choice...