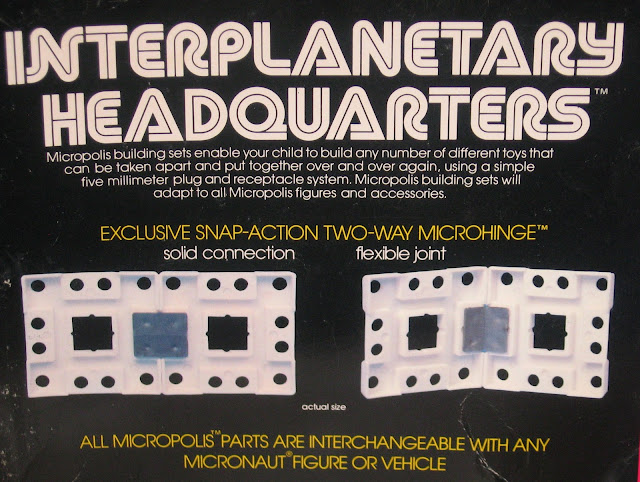 One of the most incredible products to come out of Mego's Micronaut line of the 1970s (an American version of Takara's Microman brand...) was the "Micropolis" building set series. 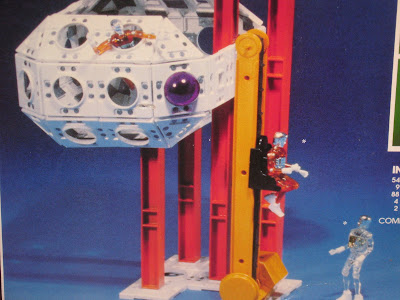 The Micropolis collection was advertised in Micronaut catalogs and on box art as "the building set that never stops growing," and a major selling point was that all "Micropolis parts are interchangeable with any Micronaut figure or vehicle."
The first Micropolis sets were released in America in 1978 as part of the Series 3 wave, and included such toys as "Microrail City," "Galactic Command Center," "The Interplanetary Headquarters" and the "Satellite Survey Station."
Each one of the sets came with literally hundreds of pieces, so that ambitious kids could construct a complete, interactive city of the future.  I had one of these sets as a kid (I think it was the Galactic Command Center, but I'm not sure...) and I  played with it for years.  Seriously.
The Micropolis packaging described the instructions for the sets in this fashion: 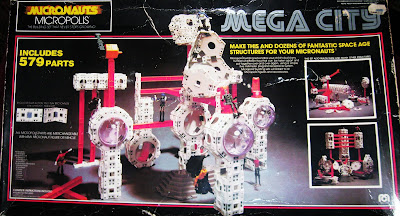 "Micropolis building sets enable your child to build any number of different toys that can be taken apart and put together over and over again, using a simple five millimeter plug and receptacle system. Micropolis's building sets will adapt to all Micropolis's figures and accessories."
Every Micropolis set also came with various individual accouterments.  The Interplanetary Headquarters, for instance, came with a whopping 186 parts, and in this case, some of those included a "Multi-Position Crank-Action Elevator" and "Micronaut Elevator Seat."
In 1979, Sears sold the mother of all these Micropolis sets, "Mega City," which was a vast toy incorporating some 579 pieces (162 squares, 27 triangles, 308 connectors, 12 octagons, 15 columns, 22 accessory connectors, 2 bucket seats, 4 seat bases, 4 charis, 1 crank, 1 winch, 6 domes, 4 stairs, 2 consoles...).

Given a lot of time and dedication, intrepid kids could actually create a whole city for their Micronaut figures and vehicles out of these construction play sets.  Or, as the box suggested: "Make this and dozens of fantastic space age structures for your Micronauts!"
And I'll tell you, that's exactly what Joel and did Christmas morning two weeks ago, after he opened his last gifts: a complete Mega City and a near-complete Interplanetary Headquarters.
Even now, our fingers still hurt from pushing those tiny gray "connectors" into the white, unforgiving "receptacles."  I actually couldn't type for a few days because my finger tips were black and blue...
Still, it was all worth it.
Joel parked his Astro-Station, battle cruiser, Biotron and Microtron in Mega City, and for awhile, it was an amazing diorama.  We had a great series of adventures there.  After a few days, however, our cats accomplished what Baron Karza and Membros never could: they toppled Mega City.
Anyway, here's a 1970s-era commercial for Micropolis so you get a sense of what the building set looks like in action: