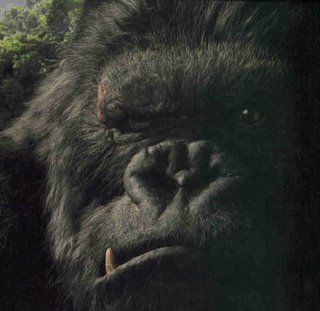 Despite my love for the original King Kong (1933) -- as well as the 1976 remake introducing Jessica Lange -- Peter Jackson's two hundred million dollar update, which opened in theaters yesterday, wasn't necessarily an easy sale for me.

Why? Well, on the first count, I'm not one of those people who thinks the same movie needs to be re-imagined and re-made for every generation just because special effects have improved. Let alone a film already once re-made.

And I also think there's something very healthy about the idea of today's 15 and 16 year olds seeking out a film from 1933 or 1976, and becoming acquainted with what movies looked like in those eras. Cinema history is more than Napoleon Dynamite (which I love...) Wedding Crashers and Shrek. One of the greatest movie "awakenings" in my life occurred when my father began introducing me to the movies he loved from the 1960s, titles like The Great Escape, Cool Hand Luke, Hud, Bonnie & Clyde, The Graduate and the like. I was about sixteen when we did this together. I shudder to think how I would be different today had I - as a teen in the 1980s - not been exposed to such works. Today's teenagers, weaned on CGI and the Hollywood blockbuster mentality, could do with a little history lesson.

Secondly, and more importantly, I was one of those apparently few-in-number movie-lovers who didn't drink the Peter Jackson kool-aid after the last installment of Lord of the Rings; Return of the King. I greatly admired Jackson's first film in that trilogy, Fellowship of the Ring, but found both The Two Towers and Return of the King somewhat overlong, lugubrious, and laboriously paced. Let's face it, you could just watch Fellowship and Return and skip The Two Towers all together, and still get a pretty good sense of the Rings story without missing anything vital. The second film just kills time....for over three hours. I realize, this is heresy I'm writing to some people...

And yes, I am quite aware that Jackson and Return of the King took home a near-gaggle of Academy Award statuettes, but that fact doesn't change my estimation of these films. The latter two installments of the saga bored the pants off me. And believe me, you don't want me sitting around reviewing movies without my pants...

One quality a good filmmaker requires is discipline. Yep, discipline. The original King Kong was a taut and lean 90 minutes from start-to-finish. When I heard that Jackson's King Kong was going to run over three hours (three hours and seven minutes, I believe...) I really began to grow concerned. I remembered how the ending(s) of Return of the King rambled and rambled. And I wondered if Jackson weren't just a director badly in need of a close associate who would tell him that he hadn't just shit a golden egg, that his work, too, could use the experienced hand of a fine editor.
So, as I wrote above, I was not necessarily sold on the Kong remake, despite my love of the property over the years.

But now, having seen the film on opening day, I can state unequivocally and for the record that these amazing three hours move very quickly and enjoyably. Director Jackson knows exactly what he's doing, and this is a better film than any he's yet made. King Kong is an incredible silver screen spectacle - a monster movie epic on a scale heretofore unimagined, even by genre enthusiasts like myself.

Like I said, I was inclined to be wary, but came out of the film filled with awe, excitement and wonder. This movie is everything you imagine it could be; and much more. The special effects are, for the most part, quite fantastic, and the elements that have made Kong work so well as a story over the years have been augmented, nay improved. The end result is a film that makes more sense, and tugs more powerfully at the heart than either Kong predecessor.

This is Jurassic Park on steroids. And more.

Although I like all incarnations of Kong, if I'm being totally honest, I guess I've always felt a tiny disconnect with one element of the tale. Each film before this one - each in its own way - has wanted audiences to sympathize with Kong, with the Beast who "is as one dead" because of his love for a blond beauty. That element comes to the foreground most successfully in this version.

The dinosaur attacks on Skull Island in Jackson's version are so ramped up, so-over-the-top, so much the last word in edge-of-your-seat cliffhanger action, that you can't catch a breath. You'll squirm and gasp throughout these exhilarating moments. Kong and Ann swing from vines, fall from a precipice, fight off a pack of tyrannosaur and emerge triumphant, and so something is clear in this story in a way it's never been before in Kong history. These characters have bonded. An experience like this permits nothing else. They've been through the wringer together, and Ann has come to need Kong to survive on Skull Island, so it is natural that she would, after a fashion, fall for the big hairy guy.

This is really one of the best things about the movie. For the first time, you believe that a gorgeous blond actress could fall head over heels in love with a 25-foot tall gorilla. It's perfectly understandable; even rational, given the (admittedly peculiar) circumstances.

It's odd to write about a giant gorilla as a "character," but this version of Kong is far more developed too. He is a battle-scarred warrior, perhaps a little over-the-hill, even. He is the last of his kind, as you can see from his cave high over the island, where the bones of his ancestors and family lay scattered. And the natives in this film are terrible, psychotic people, so one senses that Kong has made his loneliness their worst nightmare. They live in mortal fear of their "God," and again, no version of the film has brought that idea home better than Jackson's. When you see the terrors of Skull Island this time around, you'll understand exactly how and why a giant gorilla might long for the company of a Vaudeville entertainer to take his mind off certain things. Like giant vampire bats. Or roving T-Rex packs.

And because the Ann Darrow/King Kong relationship makes more sense in this version, the last third of the film (set in 1933 Manhattan...) is far more effective. Again, this may sound absurd based on the fact I'm writing about a giant simian here, but the film works in the same rarified dimension as Romeo & Juliet or any other tale of star-crossed lovers. Ann isn't just "sorry" for Kong because she has sympathy for an innocent animal, she actually loves him, based on their experiences together. All her life, the script informs us, the people she loves have left her; leaving her vulnerable. Kong is the one creature always there for her; always fighting to protect her.

After the dinosaur stampedes (an amazing sequence), the spider pit (which will make you really uncomfortable...) and the film's other horrors, I figured it was impossible for Jackson to surpass his already considerable efforts for the climax. But he does just that . The portion of the film set in Manhattan, particularly atop the Empire State Building is utterly enthralling. You will feel awe (at the depiction of NYC during that time...), vertigo (at the dizzying heights), and anxiety (even though, of course, you know how it's all going to end.) This is an amazing climax to an amazing roller-coaster of a film, topped by a denouement for the ages. Does this sound like mindless praise? Well, just remember, as I enumerated above, I went in a skeptic. I wasn't inclined just to give the movie a pass because I love the character of Kong.

King Kong is a great Beauty & The Beast story, a tragic tale of a "brute's" love, and how it is ultimately used against him. I don't think the metaphor for male/female relationships has ever been better put in a monster movie. A lefthanded compliment, perhaps, but this is the most emotional and also the most satisfying Kong. It's also an unsurpassed thrill ride. The dinosaur stampede will knock your socks off, and the Empire State Building sequence will rip your heart out.
You can tell that every frame of this film is a labor of love.
But don't take my word for it, go see it. It's more fun than a barrel of...well, you know.
at December 15, 2005