In "Destruction," A UFO attacks a royal Navy destroyer in the South Atlantic, and is shot-down by missiles. Commander Straker (Ed Bishop) is curious about the reasons behind the attack, and asks Paul Foster (Michael Billington) to glean information from Admiral Sheringham's (Edwin Richfield') attractive secretary, Sarah Bonsanquet (Stephanie Beacham) about the encounter.

Straker and Colonel Lake (Wanda Ventham) soon discover that Sarah is secretly using a special refracting telescope with a "radio wave jammer" to help the aliens get through Interceptor defenses, perhaps because her father, a former astronaut, has been abducted by them.

Regardless, the aliens are bound and determined to get through to the destroyer, which is dumping a toxic nerve gas into a deep trench in the ocean. Should the nerve gas escape its containers, all of human life on Earth would be wiped out. 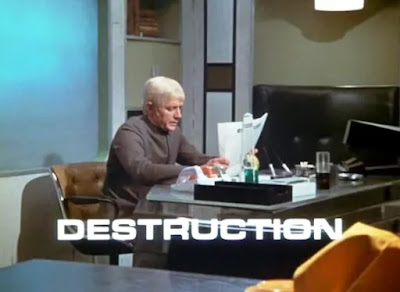 "Destruction" is a very weak episode of UFO, for numerous reasons, and therefore a crushing disappointment.  Several episodes of the series, from "The Cat with Ten Lives" to "Flight Path" deal with the idea of a human pressured by endangered loved ones, into helping the aliens. This is at least the third time that narrative has been used in one season.

On one hand, the idea of compromised individuals becoming turncoats fits in with the overall scheme of the "human cost" of the war between planets. On the other hand, even with Straker's final worry about how many humans are compromised in this war, the story doesn't feel fresh. Uniquely, however, Sarah pays no consequences for her actions.  In the past, turncoats such as Roper pay with their lives, and get some form of redemption.  Sarah gets no punishment, and no redemption. 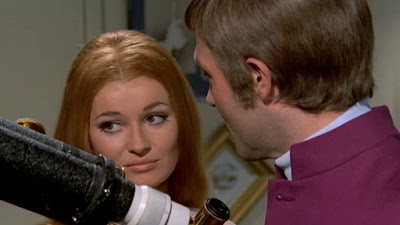 Furthermore, the alien plot in "Destruction" doesn't really make much sense, given what we know of the enemy's motives. We know from previous episodes that the aliens harvest human bodies, and, because they are non-corporeal, need those human bodies (or feline ones, as the case may be), to exist, to pilot craft, and more.  So why on Earth would the aliens attempt to utilize a nerve gas that would destroy all life on Earth?  Doing so would rob them of the very resource they most need to harvest: us!  So the narrative does not stand up to any kind of scrutiny.

These are significant problems.  In terms of characters and social context, "Destruction" isn't very good, either.  We''re back in sexist-ville here, with Straker basically ordering Foster to romance a young woman, Sarah, to get information from her boss. I wonder where in the SHADO manual this is described as an acceptable tactic. It's ugly for two reasons.

First, the strategy suggests that a woman will sacrifice top secret information, and loyalty to her superiors, for a handsome face and nice bod. Secondly, it reduces the character of Foster -- a pilot, and, at times, a rather cunning strategist -- to nothing more than a handsome face and nice bod.  Basically, "Destruction" transmit the notion that Paul's looks, or "charms" are more important than his abilities, and that idea doesn't do the character any favors. 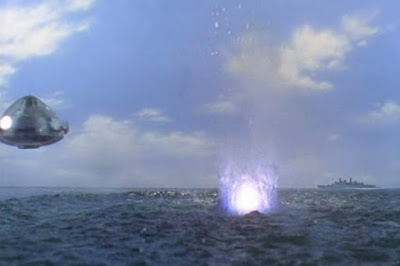 Finally, "Destruction" may just must be the dullest episode of UFO ever made.  The final alien attack on the destroyer goes on and on, seemingly endlessly, with not a single member of the primary cast involved in the events to make it meaningful or vital.  Skydiver shows up for the party late, but Straker, Foster, and Lake are never on-screen to comment from HQ, or otherwise show their engagement in the crisis.  It's a terrible, un-involving denouement.

I suppose all episodes of this series can't be stylishly compelling or mind-blowing (think "Timelash," "Mindbender," or "The Cat with Ten Lives,") but "Destruction" is a really pedestrian, poorly-conceived, and poorly-executed installment of this fifty year old cult series.

In two weeks: "The Sound of Silence."