In “Planet of the Slave Girls” Buck (Gil Gerard) and Colonel Deering (Erin Gray) return to New Chicago, after meeting up in space with Major Duke Danton (David Groh) of Earth Recon #1. Duke takes an instant disliking to Buck, and is a rival to him, both for the approbation of his cadets, and for Wilma’s affection. Buck attends Danton’s class to explain 20th century tactics, but the visit degenerates into a pissing contest as Duke and Buck tackle one another to demonstrate football moves.

Before this rivalry can escalate further, Buck and Wilma learn of a developing crisis. In New Chicago alone, there are 25,000 cases of deadly illness, believed to be food poisoning. The illness has hit the Earth Defense Directorate especially hard, downing pilots and thereby imperiling the planet. A scientist, Dr. Mallory (Macdonald Carey), learns that there is a bio-chemical agent” poisoning the food supply, but before he can create an antidote, his assistant, Stella, sabotages his computer and flees the city.

The source of the poisoning, it is learned, is the distant world of Vistula, run by hapless Governor Saroyan (Roddy McDowall). Buck, Duke, and Wilma lead a mission there to learn more and befriend the governor’s son, as well as a slave girl named Ryma (Breanne Leary).  They learn, in short order, of a cult-leader named Kaleel (Jack Palance), who has poisoned the Earth in hopes of disabling its defenses, and then taking it over. His headquarters is in a desert mountain fortress in the “Sea of Stone,” one protected by an “energy leech” which disables spaceships.

While Buck and Wilma attempt to stop Kaleel on Vistula, Duke returns to Earth to marshal a defense, despite the lack of healthy pilots. Among the pilots: Twiki and Theo, and a retired pilot, Brigadier Gordon (Buster Crabbe). 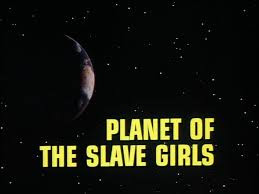 The first Buck Rogers episode to follow the series premiere, “Planet of the Slave Girls” is a two-hour opus of incredible scope for 1970’s television. The episode starts with an intriguing mystery, comes to include a relevant topic in the culture (cults), and ends with one of the series’ most engaging and invigorating space battles. The character interaction is intriguing too, since Buck gets a charismatic nemesis (and then friend) in Groh’s unimpressed Duke Danton.

The event that leads into the main story here is a mystery illness felling Earth’s best pilots. Long-time sci-fi fans may recognize this as the same plot element or ingredient from the second episode of another Glen Larson-produced series, Battlestar Galactica (1978-1979): “Lost Planet of the Gods.” There, the rag-tag fleet was left defenseless as an illness incapacitated all the viper pilots.

After this derivative premise, however, “Planet of the Slave Girls” heads off into some original and provocative territory. Despite the pulpy and exploitative episode title, the episode narrative actually deals with a number of relevant issues in the culture at the time. The first involves the peril of colonialism, even benevolent colonialism. Governor Saroyan is not an evil man, but he willfully looks the other way regarding issues such as slavery, and freedom. His willingness to use the native people of Vistula to make money (and trade with Earth) is the very opening that Kaleel needs to rally the disenfranchised people to his cause.  Of course, his cause is evil and self-serving. 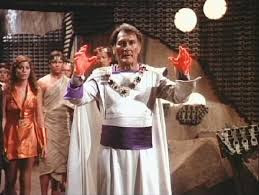 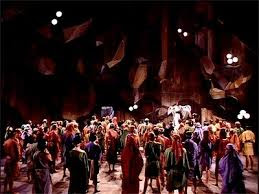 Kaleel, however, isn’t just a stand-in for the desert Mujahideen fighting an occupying power, like the Soviet Union in harsh Afghanistan. Kaleel is also a mesmerizing cult-leader in the spirit of Jim Jones, and Jonestown.  Just a year before this episode aired, the mass suicide at Jonestown in Guyana occurred, resulting in the death of 909 followers. Those who died succumbed to group think, and were therefore susceptible to Jones’ charisma and leadership. Kaleel is a character very much in the spirit of that real life figure, controlling his people to the extent that they believe he possesses supernatural powers: the ability to kill with a touch. He claims that his touch “is the truth,” and his people cower in fear of it. In one powerful scene, we see a woman rat out her husband, out of fear of Kaleel and his powers. “Planet of the Slave Girls” also aptly describes Kaleel as a “sorcerer who feeds off the adulation of a crowd.”  This was a meaningful idea in 1979, given the Jonestown tragedy.

Although the episode is a fast-moving comic-strip, essentially, it’s remarkable how this Buck Rogers tale is set-up to reflect a very nuanced concept: both the idea that colonialist attitudes create a backlash (in Saroyan’s blind leadership) and that the would-be replacement leadership for that colonialism, in Kaleel, can be fanatical and dangerous. In other words, neither option is workable, equitable, or just.

The episode’s final battle is a high note, and set-up well in the first scenes. Early on, Buck explains “red dogging” and “sacking the quarterback” in Duke Danton’s strategy class. In the final space battle, Buck puts these concepts into action. The final space combat sees Buck’s small group of pilots facing off against a huge, but inexperienced fleet. The key to victory is the destruction of the enemy fleet’s general, Galen, who is “calling the shots.”  The battle is splendidly rendered as Twiki, Buster Crabbe’s Gordon, and others use football strategy to sack this particular quarterback. The design of the alien fighters is also great. 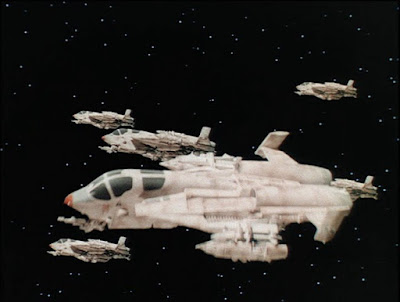 Although this space battle is entertaining, and even invigorating, other special effects moments throughout the episode are not nearly so inspiring.  For example, the Cylon base from “Lost Planet of the Gods” fills in as a launch bay at one point.  At another point, on Vistula, we actually see the familiar spires of Earth’s New Chicago in the background.  And, a transport to the desert starts out as a Buck Rogers design, but soon becomes a shuttle from Battlestar Galactica…a completely different spaceship design.  These inconsistencies dramatically cut down the success of the episode’s visualization.  The miniature/effects moments are a mess throughout, even when some moments -- like the reveal of Kaleel’s space fleet in a vast desert landing field – are impressive. 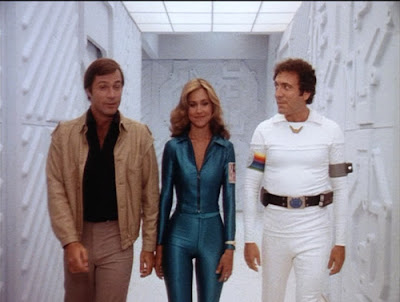 In terms of characters, it is a shame that Duke never re-appears on the series, as he and Buck have a fun chemistry that goes from outright hatred, to fun, competitive rivalry.  The first season of Buck Rogers never really had a male character who could or would challenge Buck, and Duke could have done the job.  Sometimes Buck’s “know it all,” “always right” persona becomes tiresome, and it’s nice to see a character to provide a little push back. 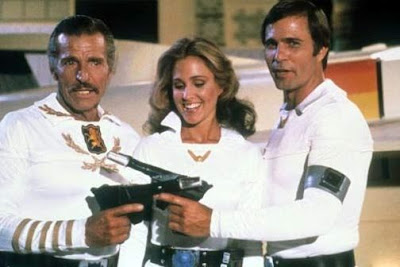 Finally, “Planet of the Slave Girls” features some great moments with Buster Crabbe, as Brigadier (Flash?) Gordon. By featuring this beloved cult figure, the new Buck Rogers series remembers and honors the history of the name Buck Rogers.  It is great to see Crabbe in action again.

Next week: “Vegas in Space.”