Horror Lexicon #8: Through the Looking Glass 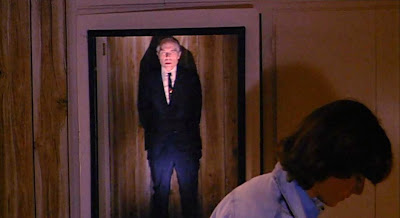 Mirror, mirror on the wall...

Horror movies frequently serve as a mirror to our world, a reflection of our deepest fears as individuals and as a culture. Given this notion, it’s no surprise that the mirror remains one of the most important and oft-used symbols featured in the genre.  The looking glass, simply stated, reveals a picture of us.

In many instances throughout the horror genre, the mirror represents a peek into another world, a dimension in view, but often beyond touch.  In films such as The Boogeyman (1980), the mirror contains a terrible evil, a repository for a terrible childhood memory, for instance.  In this case, we see ourselves in the mirror and remember the pain we’ve suffered, the pain visible to us, but not to others. 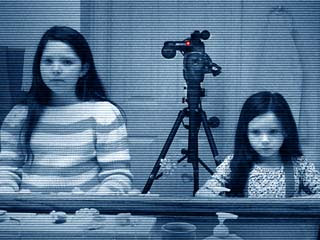 In John Carpenter’s Prince of Darkness (1987), the mirror is utilized to represent the “other world,” one where evil dwells, our “opposite.”  This film is exceptionally clever, creating a dynamic of God/anti-God, matter/anti-matter, and deploying the mirror as the visual cue to that similar but opposing realm.

Poltergeist III (1988) treads similar territory, revealing that the world of the supernatural lives as malevolent reflections in all our mirrors.  The idea is interesting, if not consistent with previous Poltergeist lore.

Mirrors in horror movies are also used to say something about how we face fear.

In films such as Candyman (1992) and Paranormal Activity 3 (2011), characters face the mirror, and quote a name (like “Candyman” or “Bloody Mary”) three times in a row to summon a force of darkness.  In these situations, people are facing themselves and their own fears, and looking for some sign that our “belief” can re-shape reality itself.  We look in the mirror at our own expressions, our terror growing...

There’s an old saying that evil cannot gaze upon itself, and so a mirror has proven a weapon against evil in horror films such as A Nightmare on Elm Street IV: The Dream Master (1987).

On a more frequent basis, mirrors are utilized in vampire films such as Fright Night (1985), because vampires don’t cast a reflection.  The mirror shows only empty space where Jerry Dandridge (Chris Sarandon) or other “monsters” should be.  In other words, a mirror reflects life, but not the undead.

The mirror has proven a potent symbolic and visual device in non-supernatural horror films too.  In Brian De Palma’s Dressed to Kill (1980), for instance, Dr. Elliott (Michael Caine) hides a terrible secret about himself, a fracturing of his very psyche.  Virtually each time his alternate identity, Bobbi, is mentioned even in passing, De Palma cuts to a view of Elliott looking in the mirror, an important visual cue of the psychiatrist’s schizophrenic nature.

Single White Female (1992) treads a similar path.  The film involves a psychotic woman, Hedra (Jennifer Jason Leigh) who has never escaped her need for her twin…a girl who died years earlier.  Now, Hedra attempts to complete herself by making Allie (Bridget Fonda) a kind of twin-surrogate.  The film’s director, Barbet Schroeder features numerous shots of Hedra and Allie together in a mirror, a visual attempt to re-capture the film’s opening composition of Hedra and her twin sister. 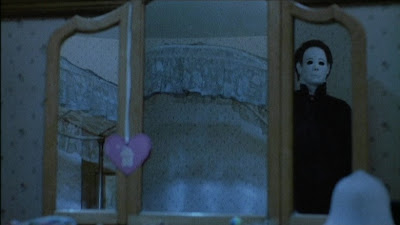 On a very basic level, the mirror is also a useful device for generating jolts or jump scares.  A character runs into a room, slams the door...and something evil is reflected on the mirror hanging there.  We've seen this kind of surprise jolt in films such as Phantasm (1979) and even, to a degree, in Halloween IV: The Return of Michael Myers (1988), wherein we witness The Shape illuminated by lightning....in a mirror.

One of my all-time favorite mirror shots appears in this film as well. The Shape lifts his knife, mirror behind him on both sides, and we see an endless lines of stalking Boogeymen in the frame.  This was a perfect visual representation of the film, which featured on more than one occasion "false" or "multiple" Michaels to confuse the authorities (and audiences). 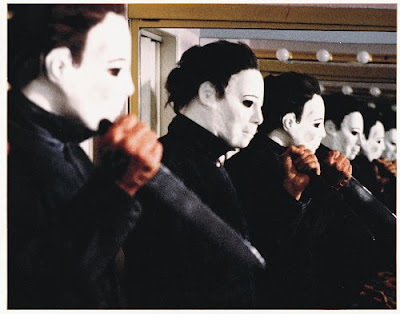