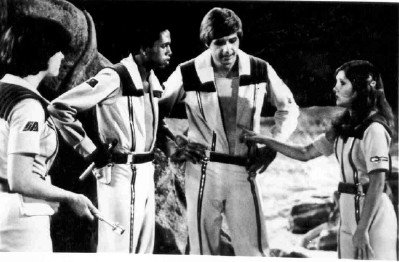 This week on Filmation's 1977 Saturday morning space adventure, a Space Academy mission "marking the boundaries" of the Alderaan Triangle with "beacons," grows increasingly dangerous. Chris and Paul's Seeker experiences a mysterious power drain after going off course to avoid space junk.
The Seeker is miraculously rescued by a "strange old-fashioned laser beam," which pushes the craft out of the futuristic Bermuda Triangle. On the viewscreen, a strange disembodied head appears and warns the Seeker to stay away.

Thus begins "Star Legend," written by Samuel Peeples and directed by Ezra Stone. Meanwhile, back at the Academy, Gampu comes to believe that the legendary Captain Rampo (Howard Morris), "the flying dutchman of outer space" may be responsible for the incident with the Seeker. Gampu describes the legend of how Rampo, captaining an early planetoid spacecraft not unlike the the Academy, became lost in space, over a millennium ago. Tee Gar then obligingly reports that a millennium is a thousand years. Thanks, Tee Gar! Anyway, Commander Gampu flies the Academy in (full speed ahead!) to the Alderaan Triangle's lateral perimeter, and the Academy too is promptly drained of energy...

With the Academy frozen in the Triangle, Gampu takes Blue Team aboard a Seeker to Rampo's space craft, which resembles the Academy, but is lit green. Once on board, a strange specter warns them to "leave...or stay forever" and states that "all visitors here are doomed...doomed!"

Gampu and his cadets laser down a locked door and discover 1,603 year-old Captain Rampo, a funny old man dressed like a train conductor, circa 1910. Turns out he's been pulling a Balok strategy (from the classic Star Trek episode, "The Corbomite maneuver.") A thousand years ago, he was establishing a colony on a nearby planet when the sun went nova. A magnetic storm forced him to cross into the Alderaan Triangle and he and his ship have remained trapped there, orbiting the space trap in an attempt to stop a "scourge of energy vapor" which drains ships of power. He's been pretending to be a fierce specter to keep other ships away...when in reality he's just a kindly old man. But unlike Balok, he doesn't offer anybody Tranya.

Gampu and the others decide to give the hungry energy vapor "indigestion." They lure it into the captain's quarters, then return to the Seeker and destroy Rampo's ship...thus ending the star legend.

"It's the end of an era," one character realizes a bit sadly. Yes, indeed it is, for this was my last episode of Space Academy! I've finished blogging about every episode. Hah! Camolopardis!

Next week, for Saturday Morning Cult TV blogging, I begin posting about episodes of another 1970s kid's show. Stay tuned. And pour the milk on the Cheerios.
at February 18, 2006