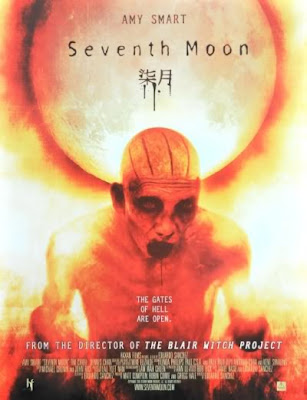 Eduardo Sanchez, one of the co-directors of 1999's landmark The Blair Witch Project, returned to the horror genre with 2008's Seventh Moon, a dazzling and effective roller-coaster ride that wastes not a single breath, a single frame.

The skillfully-crafted Seventh Moon actually adopts some of the Blair Witch's specific story points and famous techniques, including the pervasive (and controversial) use of un-steadicam/shaky-cam.

The important point, however, is that Seventh Moon successfully generates and develops a consuming, throat-tightening sense of fear that endures right up until the final, catharsis-inducing frames: a montage of the (welcome) sunrise after a long, harrowing, moonlit night.

Seventh Moon is the tale of young newlyweds Yul (Tim Chiou) and Melissa (Amy Smart), who are honeymooning in China.

After a busy day at a street festival, the couple's Chinese tour guide drives the exhausted and inebriated newlyweds to meet Yul's family. They fall asleep during the ride, however, and when Melissa awakens, it is night and the guide confesses that he is "lost;" that the roads in this rural part of China are "very tricky."

The guide goes off in the impenetrable darkness to find help and directions...and then promptly disappears, leaving Melissa and Yul to fend for themselves in unfamiliar terrain. '

The locals, they soon learn, believe in the story of the Seventh Moon, a time when "hungry ghosts" walk the Earth in search of offerings. This is the one night a year in which "the Gates of Hell are open."

Long story short, the local villagers believe that if they leave "live" offerings outside their doors, the hungry ghosts will not come calling for them. Mel and Yul attempt to flee from the small cluster of houses, driving away in the guide's car...but a feral, fast-moving, white-skinned creature crosses their path and runs them off the road. Before long, Yul and Mel are on the run, pursued by a hunting group of these ferocious creatures...

Like The Blair Witch Project, Seventh Moon involves young people of some arrogance (early on, Yul teases and cajoles his Chinese guide about a T-shirt). The movie also focuses on the truth/fiction of a local legend (the legend of the Seventh Moon rather than Burkittsville's Blair Witch). And, after a wilderness chase, some of the action occurs at a mysterious, isolated house in the woods (not Rustin Parr's this time).

Also like The Blair Witch Project, the movie plays on the deep fear of being lost -- with literally nowhere to turn -- and the shaky camerawork ultimately becomes so frenetic that, almost by itself, it forges a borderline sense of hysteria.

But where The Blair Witch Project gazed meaningfully at the artificial barriers we construct (barriers like media) to insulate ourselves from unpleasant facts/reality, Seventh Moon offers a more heroic portrait of mankind.

Some viewers have apparently asked what's "the point" of all the terror in Seventh Moon (not necessarily a pertinent question in the genre, actually...), but the movie does have a point. The narrative concerns marriage, and specifically the idea that sometimes there is no other option than to sacrifice yourself for your loved one.

The character in Seventh Moon who at first appears weak is the one who ultimately proves strong; the one who broaches that sacrifice. The movie's last view of that character is legitimately haunting.

Much of Seventh Moon's drama arises from this crucible of the newly-married youngsters. At first, they bicker relentlessly. "You should have paid more attention to where we were going," Mel accuses Yul at one point.

As for Yul, he's stubborn and slow to accept the reality of the horrific situation.

In the end, however, both characters cast-off recriminations for heroic action. And, in harrowing fashion, that action takes the form of a pitch-black excursion into an underworld, into the "nest" of the creatures in a subterranean cave. 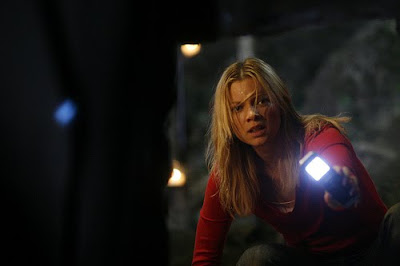 One of the newlyweds broaches this shadowy Hell with nothing but the light from a cell phone, and the lengthy sequence makes for a nail-biting bit of suspense.

Again, I've read some genre reviewers complaining that these moments are under lit, and that you can't make out enough detail.

I disagree wholeheartedly with that assessment: the low light and the brief excursions into total blackness only enhance the movie's already-keen sense of creeping uncertainty and the terror of an unfamiliar terrain.

This isn't supposed to be The Waltons, it's supposed to be a scary movie that plays on your fears. One of those fears, one of our basic human fears, is fear of the dark.

Much of Seventh Moon is as suspenseful as that dimly lit scene, actually. There's a scene early on during which Yul and Melissa became trapped and surrounded in their damaged car. The ferocious, frenetic monsters attack en masse, and the couple is left with no recourse but to rip out a back seat and seek (brief) sanctuary in the tight confines of the car trunk. The action is so intense that the shots virtually bleed into each other, a flurry of images that suggest unmatched velocity and violence.

The shaky-cam approach -- which also is often derided by many -- makes you feel like you're right in the thick of the action (not unlike the outstanding [REC][2007]. It's a different approach to visualization, to be sure, but not one nearly so easy to forge as it looks. Sanchez uses this style exquisitely, much as he did in The Blair Witch, and gives the movie a cinema verite, spontaneous atmosphere that heightens the aura of stark, inescapable terror.

At times, when highlighting the action involving the creatures in particular, Sanchez knowingly goes out of focus (another quality of the cinema verite school), and denies us the very details our eyes covet. This choice of visual approach maintains the mystery of the monsters' appearance. The ghouls never become so familiar that they lose the capacity to scare you. 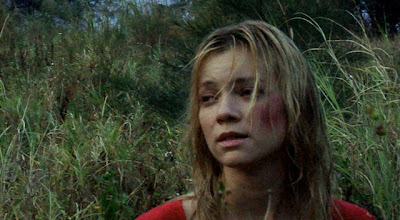 Good horror, frankly, is often very much about this idea; about denying the audience the very things it seeks: a good, long view at that thing lurking in the dark, for instance.

In Seventh Moon -- a low budget film -- Sanchez makes the absolute most of his lighting and camera work to deny viewers any morsel of comfort, either visual or narrative. The film also moves at a blazing pace, denying us the time to process entirely what we have witnessed.

Like Tobe Hooper's The Texas Chain Saw Massacre, Seventh Moon is all about showing just enough to frighten us...and then artfully pulling back,and permitting our minds to do the heavy lifting and imagine the rest. Good horror movies should sow discomfort any way they can. They don't necessarily need to feature expensive make-up or special effects.

I admired Seventh Moon because it gets about its ghoulish business with a ruthless sense of efficiency. It dispenses with explanations and certainties and gets right to the matter at hand: an all-night descent into Hell itself.
at November 11, 2014

Email ThisBlogThis!Share to TwitterShare to FacebookShare to Pinterest
Labels: Eduardo Sanchez, From the Archive