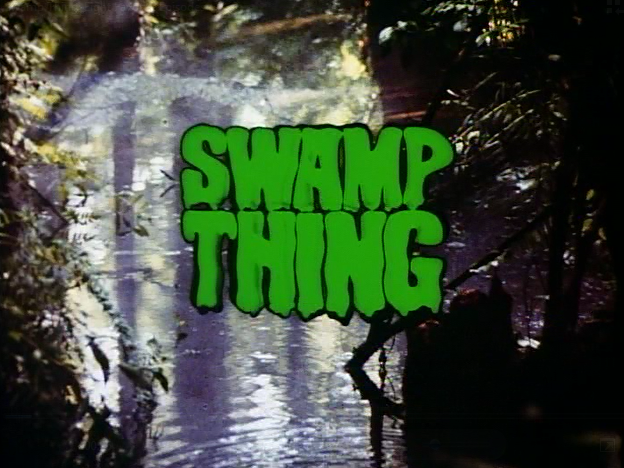 The character moved to his own title in 1972, and the comic-book depicted the tale of Dr. Alec Holland (Alex Olsen, originally…), a scientist hoping to defeat the plagues of starvation and famine throughout the whole world.  But instead Holland merely changed dramatically his own human nature.  In particular, an incident his laboratory involving his work -- a bio-regenerative compound -- caused Alec’s very biology to be impacted.

In this ecology-driven story, Holland emerged from what should have been his grave in the Louisiana swamp, but as a sentient plant being…one sworn to defend the local wild-life and terrain. Over the years in the comic stories, Swamp Thing faced many different menaces, but his most notable human opponent was the glory-seeking, avaricious Dr. Arcane.

In 1981, Wes Craven directed a low-budget Swamp Thing movie that emerged as one of the box office and critical winners of the summer of 1982.  The film starred Dick Durock as Swamp Thing, and the Craven film inaugurated a long movie and TV franchise, which eventually came to encompass a movie sequel, Return of the Swamp Thing (1989), a 1991 animated series, and this effort, the USA Channel Swamp Thing: The Series.

Durock returned for the TV series, which aired from July 27, 1990 to May of 1993, and Mark Lindsay Chapman essayed the role of Arcane. Shot at the Universal Studios Florida facility, the series quickly became the highest rated original program on USA, and was later rerun extensively on The Sci-Fi Channel throughout in the decade.  The series was developed by Joseph Stefano, who had also, with Leslie Stevens, given the world The Outer Limits (1963-1964).

The series premiere, “The Emerald Heart” re-introduces the viewer to the locale of the Swamp, and to Swamp Thing himself.  In particular, we meet young Jim Kipp (Jesse Ziegler), a troubled youth from Philadelphia who has moved to Louisiana for the summer, to live with his grandmother.  After rescuing one of Dr. Arcane’s prisoners in the swamp and losing his video camera in the drink, Jim meets Swamp Thing, who returns his camera and tells the boy that “The Swamp is me. I am the swamp.”

This admission turns out to be one of the key conceits or leitmotifs of the series, and the first season in particular: the Swamp Thing is inextricably joined and connected with the land where he was born, or rather, re-born. The message is clearly environmental and pro-social in nature, as we are all a part-and-parcel of the natural environment. But Swamp Thing: The Series forges a direct life-and-death connection between Swamp Thing’s life, and his proximity to the swamp.

Some of the visuals in "The Emerald Heart" are quite effective, if simple. When Jim meets Swampy for the first time, they take a walk together, but a row of trees separates them, a fact which keeps Swamp Thing in the background. This visual selection not only obscures the suits and makes Swamp Thing look camouflaged, it reinforces the idea of Swamp Thing as part of the natural landscape. 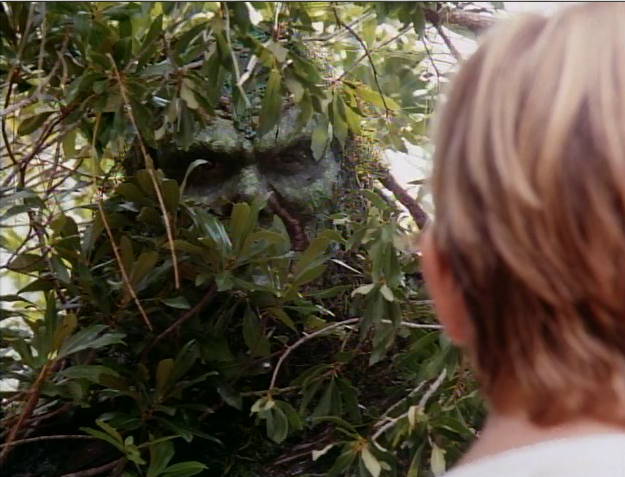 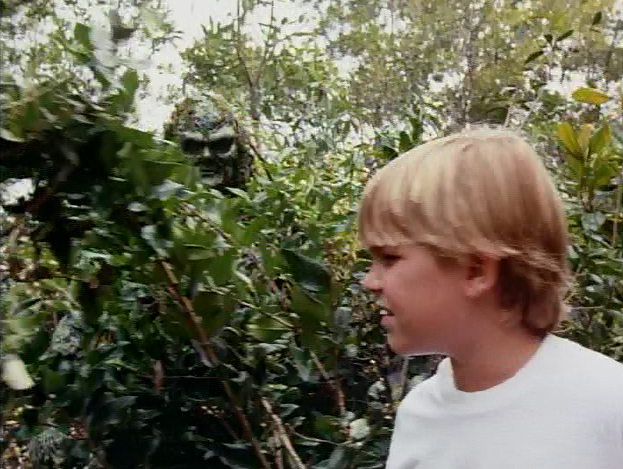 Continuing with the story of "The Emerald Heart," Jim’s Mom doesn’t want to let the boy stay for the summer, but after Swamp Thing gives her an emerald heart necklace she lost as a child, she has a change of heart…and allows Jim to remain.

The introductory episode, like many of the first season episodes, is incredibly simple and straight-forward.  In fact, it plays to me a lot like the episodes of The Lone Ranger from the 1940s.

By that I mean simply that camera-work is economical, the scale of the stories is small, there’s a simple parable dominating each episode, and the story is complete and resolved in a warp-speed 22-minutes.

Today, we are accustomed to long story-arcs and lengthy, serialized installments of superhero films and TV series, but Swamp Thing: The Series arose in the pre-history of that creative movement, and is refreshing in the sense that episodes are enjoyable on their own terms, without having to understand too much about the character or his world.

Everything in the first season is plain and self-evident.  And Dick Durock brings a nice gravity and authority -- not to mention dignity -- to his super-heroic role.  Whatever reservations you may have about a talking plant, or a man in a plant suit, are almost instantly dispensed with.  The late Durock really inhabits the character in a meaningful way.  And after watching a few episodes, I also feel that the Swamp Thing suit looks pretty good.  The memorable theme song, additionally, implies a level of seriousness or sincerity that is praise-worthy. 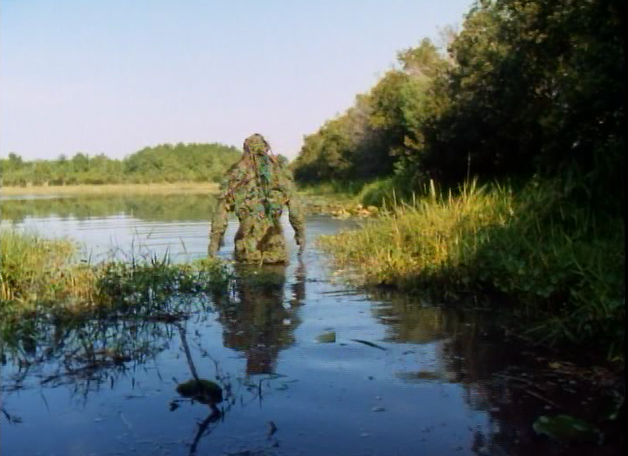 Other episodes of the first season, such as “Grotesquery” involve specifically the developing friendship between Jim and Swamp Thing.

In this story, Swamp Thing is paralyzed after being exposed to barrels of toxic waste in the swamp, dumped there by the villainous Arcane.  Two workers sell Swampy into captivity at a local freak show, a venue where Arcane sends many of his failed genetic experiments.  Jim must rescue Swampy, because the freak show is far from the swamp, and the superhero’s strength is fading.

The episode offers little more than that description, but as a testament to a growing friendship, it doesn't need to much else, either. 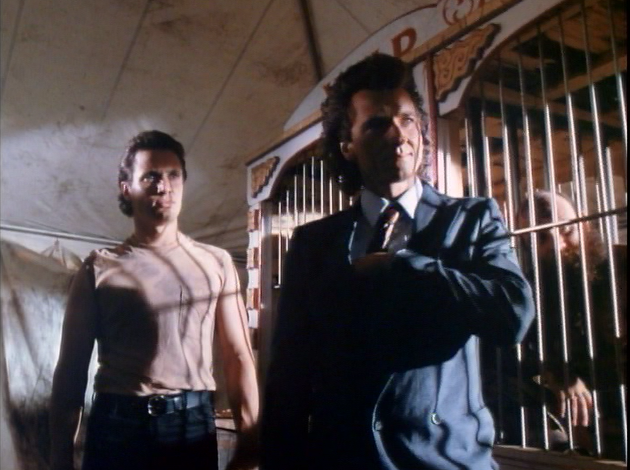 Here, Swamp Thing takes Jim to a little-seen, remote area of the swamp and shows him several near-extinct plants and creatures.

Again, the explanation for the coming extinction is simple: “people.”

When Swamp Thing senses danger from a local life-form, he tells Jim they must leave at once, but on his own Jim returns that night, and is bitten by a horrible insect creature, another of Arcane’s mutants. 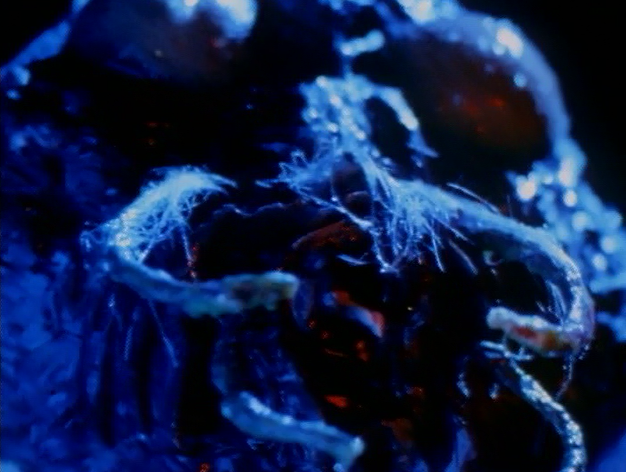 Jim is poisoned by the bite, and is taken to the hospital, near death. Swamp Thing risks exposure and discovery, and saves the boy by giving the child some of his own (green and yellow...) plant blood.

The first season more or less progressed in this fashion.  Many critics have termed the series camp, but I feel that such a descriptor is more appropriate for the 1989 movie sequel, directed by Jim Wynorski. The TV series is merely very straight-forward, very plain-spoken, and in a  crucial sense, child-like.  It's sort of innocent and guileless. The campiness that does arise in the series, in large part comes from the portrayal of Arcane.

Swamp Thing: The Series, in its first season, does two specific things, expressly: it develops the friendship between Jim and Swampy, and it explores the environmental leitmotif. With limited sets, performers and other locations, these episodes, like those of contemporaries Tales from the Darkside (1984 -1988) or Freddy's Nightmares (1988 - 1990) have a low-budget veneer to them.  If you can get past that limitation, there is some enjoyment to be had.  If you have young children to watch the season with, that enjoyment may double.


Joseph Stefano left Swamp Thing: The Series after the first season, and great changes were in the offing for the successful series. Young Jim was written out of the program (in a surprisingly brutal and merciless fashion) and the series found its creative voice by presenting science-fiction stories rather than the familiar -capture--rescue-escapes of the “superhero” genre, as it was perceived (correctly or not…) by many TV writers at that point.
at November 09, 2014

Email ThisBlogThis!Share to TwitterShare to FacebookShare to Pinterest
Labels: cult-tv flashback, From the Archive, Swamp Thing