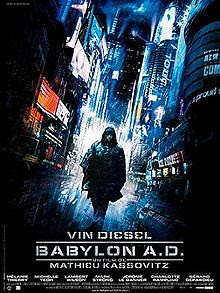 Babylon A.D. (2008), based on a cyberpunk novel by Maurice Dantec, is one of those sci-fi movies that you stick with -- even though you have reservations -- in hopes that all the intriguing elements are going to somehow come together in the end.

Alas, in this case, the film's admittedly interesting ingredients don't ever truly cohere. As a result, you might leave a screening feeling disappointed, sensing some missed opportunities.

Or to put it another way, Babylon A.D. is a fascinating story only half-told; one inadequately rendered in any significant human dimension.

Babylon A.D. is set in a near future world of dystopian proportions, and stars Vin Diesel as a world-weary mercenary named Toorop.  He is recruited by another mercenary, Gorsky (Gerard Depardieu) to smuggle a Noelite nun, Sister Rebekha (Michelle Yeoh) and an unusually empathetic young woman, Aurora (Melanie Theirry) across East Europe and into America...to New York City.

He's got six days to do it.

Toorop is a guy who doesn't ask many questions, especially when he is a promised a passport back into his beloved homeland, the United States as reward for the successful delivery of Aurora to the CEO of the Church of Neolites (Charlotte Rampling).

But along the  action-packed cross-continental journey (by train, by sub, by jet-ski, and by plane), the smuggler sees things that make him wonder about Aurora's true nature. She boasts the power to powerfully empathize with other forms of life, including cloned animals, and possesses an instinct for both healing and understanding the wounded.

Is Aurora carrying a virus that could wipe out an entire metropolis? Or is she actually the next step in human evolution?  In short, Toorop isn't certain if Aurora is savior or destroyer of man. In the end, he finally gets his answer, thanks to a clandestine meeting with Aurora's "father." 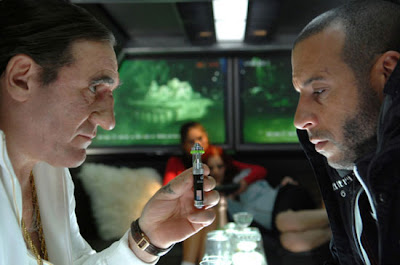 Babylon A.D. follows the cyberpunk playbook pretty faithfully. The film depicts a future society, post-2017, of "mega corporations."  Here, even Organized Religion is Big Business, and the Noelite leaders regularly check to see if their stock options are "sky high" or falling.

More than that, these religious business-people believe that their professional trade is "miracles" and that people such as Aurora can be trademarked. Religion in this world is about selling people something they desperately want, spirituality, and about getting rich off the sale.

The impressive look of New York City -- just a step below Blade Runner (1982) perhaps -- affirms the importance of corporations in this near future milieu. Skyscraper exteriors are multi-story advertisements and commercials. Corporate logos appear on every surface imaginable, even on the sides of planes and city taxis. Clearly, big business is the way of the future, if we are to believe Babylon A.D.'s vision.

But Babylon A.D. is also a cyberpunk vision because it ponders a dystopian future in which high technology does not raise all ships, so-to-speak. The early portions of the film highlight life outside of the rich United States, in Serbia and Russia, respectively, and these are places of degrading infrastructure, miserable housing, failed technology, and populaces living in abject poverty. The human beings dwelling in these countries seem to live in spaces that aren't really designed (or safe) for people. 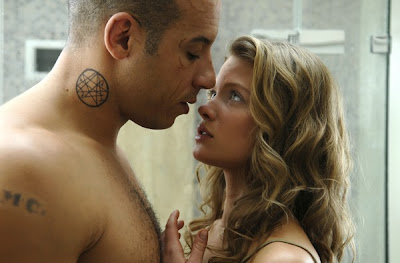 In accordance with this idea, twice in the film Toorop is forced to contend with items that don't work properly: a hand-gun and lighter, in particular. The overall impression is thus of a used-up world, squeezing the last drops of viability out of late twentieth-century technology and wealth.

But it is the character of Aurora who points the film most clearly in the direction of cyberpunk literature.  She is the daughter of both biology and technology, anticipating a new epoch in which man and machine are mated. Some futurists refer to this new age as "Singularity," and the movie gets much mileage out of the idea that machines are now developing faster than the human race is. Aurora, we soon learn, is pregnant: a "vessel" for the next step in our very evolution.

Cyberpunk has much in common with film noir, too, so you won't be surprised to learn that the film opens with a laconic voice-over narration from Diesel (as Toorop), debating the future. "Save the planet?  What for?"  He asks, sounding a lot like David Twohy's Riddick.

Toorop then contrasts that line of dialogue with his own example of "bumper sticker philosophy" as he calls it: "Life's a bitch and then you die."

Toorop himself is pretty clearly a noir hero: an outsider living on the margins of society, attempting to remain uninvolved and yet secretly hoping for a reason to become involved again; to reignite his connection to the human race.

He finds that connection, surprisingly, in a revival of his spirituality. Certainly, Babylon A.D. speaks a lot in the language of faith: Aurora's journey across the globe takes six days, there's a human populace "starving for miracles" and, yes, there's also the idea of immaculate conception.

As I wrote above, all of these elements are authentically intriguing and worth noting. Yet Matthew Kassovitz's film remains incoherent; as though it has been edited with a blunt hatchet. We literally leap from set-piece to set-piece without rhyme or reason. We don't always understand, exactly, where the characters are and what they're doing in any particular place.

For example, Toorop, Rebekha and Aurora find themselves running on a gigantic ice field with other Russian refugees at the start of one scene, and the moment leads to a bloodbath at a parked submarine.  Yet we don't know how anyone got there or what's going on. Instead, the scene plays as if someone blew a whistle, and all the actors started simultaneously running a race.

In truth, the film doesn't always seem certain which forces are pursuing Aurora, and for what reason. Several apparent thugs follow Toorop through a colorful, atmospheric bazaar and ensuing terrorist attack at a train station, and thus seem to be our bad guys. They are involved in an extensive fight sequence, and yet they have no reason to approach Toorop with hostility given what we later in the film learn about their allegiances.

And the action scenes -- such as a drone attack on two jet-skis -- feature impressive special effects but not the right tone. They play as unrealistically heroic or comic-bookish in what is otherwise supposed to be a grim, realistic world.

But the most significant problem is that Babylon A.D. fails on a human, emotional level.  The story of Aurora -- as a messiah and Mary Figure -- is one that should be beautiful and inspiring, yet it isn't. Aurora is too remote a figure to sympathize with, and we don't understand her motives for most of  the adventure.

Toorop's final revelation (about saving the planet again, one life at a time) feels more than a little facile because the audience never truly feels or experiences the connection between this mercenary and Aurora. We know it's there and we want to feel it, but the movie lurches mechanically from plot point to plot point instead of adequately developing the characters' relationships.

Babylon A.D. is supposed to be a story about the dawn of a great new age for the human race, and the rebirth of one man's faith, but the film's closing line, "Ain't that a bitch?" hardly feels like an appropriate or worthy apotheosis given the circumstances.

Because this cyberpunk film features a future world that already seems very familiar to us (from the likes of Blade Runner and Johnny Mnemonic, for instance), the only way Babylon A.D. could have differentiated itself  from the cyberpunk pack would have been in the handling of the unconventional relationship between Toorop and Aurora. This is where the filmmakers should have focused; on the emotional content of Aurora's journey; not the spectacle and danger of the actual trip.

So instead of being a movie about the wondrous joining of man to machine, Babylon A.D. feels like a movie made by a machine instead; one programmed to know and regurgitate every action cliche in the book.

Email ThisBlogThis!Share to TwitterShare to FacebookShare to Pinterest
Labels: 2008, cult-movie review, From the Archive