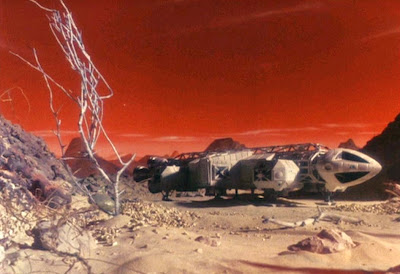 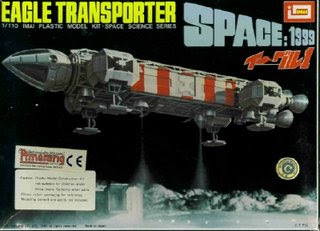 At the time, I remember feeling that I wanted to write more on the topic, especially about the Brian Johnson-designed Eagle spaceships, which have become, in so many ways, a veritable "trademark" of Space: 1999, even well into the 21st century.

Many viewers who didn't enjoy the series in terms of storytelling admired the look of the Eagles, and still do.  That's a testament to the quality of Brian Johnson's work back in 1974.

The Eagle was designed when NASA's Apollo Program was in full go mode, for instance, and it seemed like an abundantly believable extension of existing technology.

Like those real-life space crafts, the Eagle appeared utilitarian, not smooth-lined or elegant in the traditional "flying saucer" mode made famous in films such as This Island Earth (1951) or Forbidden Planet (1956).

At the same time, the Eagles seemed remarkably versatile, and that was the intent, according to Brian Johnson: 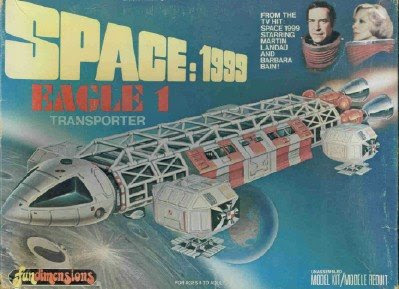 "I was in my "modular" design mode in those days. I reasoned that it made sense to make Pods that were interchangeable. The command pod could serve as a lifeboat, Eagles could be "chained" together, etc.

I sketched the basic idea and got Michael Lamont (then a draughtsman/ art department) to draw up the full scale 44" plans. I then added sections and thickened tubes until it looked "right." The final cladding was added, and then the different scale versions were finished to match the 44" model. My basic ideas came from looking at dragonflies and insects of all sorts. I copied nature to some degree - I think it made the Eagle believable."

The Eagles and their design have also proven influential in film and television history.  They've appeared, without credit, I believe, in the film God Told Me To (1976).  Below, I've selected just a few images of vehicles/spaceships that were inspired by the Eagle to one degree or another.