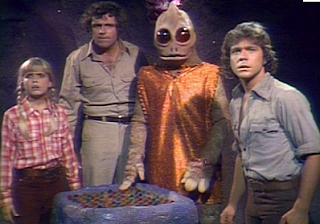 This week at Flashbak, I remembered the glory days of 1974, when the major American networks each aired a "prehistoric" program on Saturday mornings.  These shows were all aimed at kids, and I was four going on five years old.

Kids of the 1970s had a real treat in store for them as they dug into their bowls of Life Cereal and started the day, because all three major American TV networks -- ABC, CBS, and NBC -- jumped on the same bandwagon at the same time: prehistoric entertainment.

Although only one of these series -- Land of the Lost -- achieved pop culture immortality, children of the 1970s probably still remember the other two, in no small part because so much merchandise was produced for them.

Here’s a look back at the prehistoric entertainment of 1974..."

Continue reading at Flashbak!
at November 08, 2015