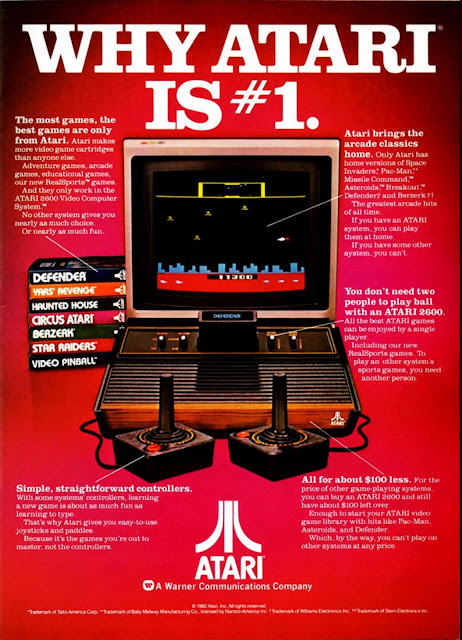 This week at Flashbak, I recalled the dawn of the home video game age, and the arrival in my life (and the culture) of the Atari 2600 (or VCS).

Here's a snippet and the url (http://flashbak.com/games-fun-remembering-atari-vcs-46013/ )

"I officially entered the video game era on Christmas morning, 1978, when my parents -- or was it Santa Claus? --- gave me and my sister a remarkable and unforgettable gift: the Atari VCS (Video Computer System), which also goes by the designation of Atari 2600. I was nine years old.

We enthusiastically the unwrapped the huge, flat, rectangular box, but had no idea what an Atari was. My folks explained, simply, that it is a game you can “play on the television.”

My father hooked up the Atari to our family room TV set (a zenith, color model), and quickly unpacked the first game cartridges: Combat, Missile Command, and Space Invaders.

We played Space Invaders first.  And from the first moment the strange aliens began their downward march on screen (to a military-sounding thump…), I was hooked."

Continue reading at Flashbak.
at November 22, 2015

Email ThisBlogThis!Share to TwitterShare to FacebookShare to Pinterest
Labels: At Flashbak, Atari, Flashbak