I've been blogging Space Academy for some time now (at least six or seven weeks), and re-acquainting myself with this thirty-year old Saturday morning, live action show. It's been an enjoyable experience, mainly because I watched the series as a child and feel tremendous nostalgia for those bygone days of the 1970s. But also because the series features good special effects, and more importantly, nice, humanistic stories.

Much like Land of the Lost (1974-1977), Space Academy holds up to modern viewing assuming you make some concessions for context (like the idea that people will still be using the adjective "turkey" in the 30th century or so...).

But, every now and then, an episode of this Filmation series is just not very good. Still, a bad episode seems, at least at this juncture, the exception and not the rule.

"Monkey Business" is one of those bad ones. 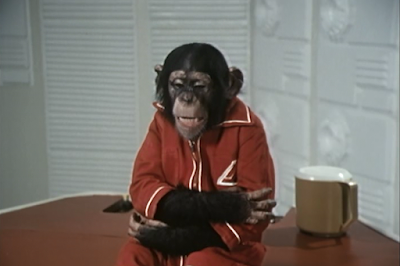 As if an explanation is in order, just let me state, the episode involves a chimpanzee named Jake.

You see, Adrian (Maggie Cooper) is working on an experiment involving chimpanzee/human communications.

At around the same time, there's a disaster on a nearby asteroid mirror array, and Tee Gar (Brian Tochi) and Professor Bolt (Arnold Soboloff) are trapped on a planetoid as it freezes. 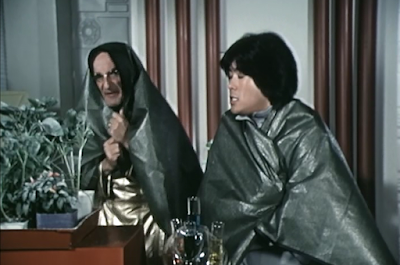 As the temperature drops, both men are reduced to cowering underneath what appear to be tarps. This is actually an improvement, because the professor had been wearing what looks like a gold velour jogging outfit.

Anyway, Chris Gentry (Ric Carrott) and Paul (Ty Henderson) set out in a Seeker to help, but Loki  (Eric Greene) and Jake the ape have stowed away in the ship's rear compartment.

In attempting to repair the array, Chris must climb the scaffolding of a tower to reach a malfunctioning circuit board. But then he falls, and can't complete his mission.

So guess who has to fix the machinery? Yep, it's Jake the monkey, who just happens to be there on that mission. Exactly when he's needed. A perfectly convenient time to test human/chimp communication, right?

With the help of Adrian's experiment and Laura's psychic abilities, Jake proves successful. 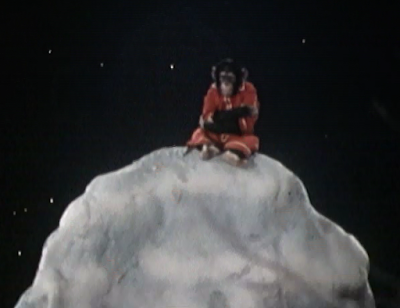 Well, what can I say? You can't have a "Countdown," a "Survivors of Zalon" or even a "Rocks of Janus" every time out the gate, right?

The problem with "Monkey Business" is that it doesn't really add anything new to our understanding of the cadets or their mission.  Another problem is that the story is obvious.

As much as I love Ark II (1976) -- another Filmation series -- I always hated that a talking chimpanzee, Adam, was part of the bargain.  Where did he come from? How could he talk?  The series never bothered to tell us, and so the character seemed like an attempt to pander to kids, and downplayed the series' overall (commendable) intelligence.

Space Academy simply doesn't need a story featuring a monkey as a main character, especially a story that doesn't go in some exciting or fresh direction.

I love chimpanzees, of course, and feel they are welcome in any cult-TV series if their presence arises from a good reason and not just a gimmick.

But "Monkey Business" feels gimmicky to me.

That said, this episode features a nice miniature work and some good sets in terms of its depiction of the space array. 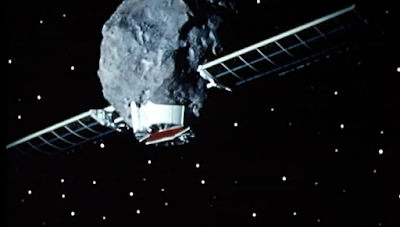 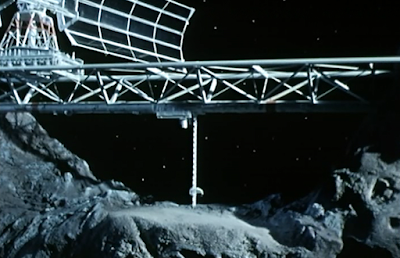 Next week: "The Phantom Planet."